Ethan Allen has a labor problem, Kelly Wearstler partners with Pinterest, and more

This week in design, some of the most aesthetically pleasing buildings on the big screen are actually delicate, handmade miniatures—but architectural marvels nonetheless. Stay in the know with our weekly roundup of headlines, launches and events, recommended reading, and more.

Arhaus has set the terms of its initial public offering, putting the company’s potential value at $2.38 billion. According to MarketWatch, the Ohio-based home furnishings retailer is offering 12.9 million Class A shares expected to price between $14 and $17 each—which could net the company up to $219.4 million—while certain existing shareholders, including members of the company’s senior management, are offering 10 million shares and looking to raise up to $170 million. Arhaus, which filed for the IPO on October 4, has not yet set a listing date.

As high demand from consumers continues to outpace production capacity, furniture giant Ethan Allen announced that it expects labor shortages to negatively impact its performance in the coming months. The retailer identified the issue in its latest earnings statement, Home News Now reports, adding that the shortage has affected its U.S. manufacturing plant production in particular and that outside suppliers are facing the same problem. Despite having a strong recent quarter, with sales up 21 percent from the same period last year, Ethan Allen expects increased costs to attract and retain employees and purchase raw materials and services from third parties.

Plans are underway for a community of 300 3D-printed homes near Austin, Texas—a development that would be the largest of its kind in the U.S. According to the The Washington Post, home builder Lennar Corp. and construction-technology firm Icon expect to break ground next year at a site in the city’s metro area. The tech firm says the 3D-printed homebuilding process cuts down on waste and requires fewer workers, which could be an asset in an increasingly tight labor market.

Facebook CEO Mark Zuckerberg announced last week that the company has changed its name to Meta—a nod to the digital realms known as the metaverse and an indicator of the social platform’s ambitions to expand into such spaces. (For a primer on the metaverse and what it means for the design industry, check out this conversation from the Future of Home conference.) According to the The Washington Post, Zuckerberg sees the metaverse as essential to tapping into a younger user demographic, and is planning to invest in projects such as shared online spaces inhabited by digital aviators, virtual reality products, and an e-commerce platform to win over the young adult audience. The announcement comes weeks after a leaked internal report exposed evidence that the company knew its social media platforms contained algorithms that caused harm to users.

Adobe is launching a new feature within its Photoshop application that would allow users to prepare a file as an NFT, The Verge reports. Within the new Content Credentials feature, users must link their Adobe ID to their crypto wallet to create a verified certificate for their file, which will prove its authenticity on compatible NFT marketplaces. The system is being launched in beta, and marks the next step in Adobe’s larger Content Authenticity Initiative, established two years ago to “combat visual misinformation and protect creators through digital provenance,” according to the organization’s site.

Serta Simmons Bedding has appointed a new chief executive officer, tapping Shelley Huff for the role after current CEO David Swift announced his intent to retire. Huff joined the company in July 2020 as executive vice president of direct-to-consumer operations and CEO of Tuft & Needle, and she was promoted to chief operating officer in April 2021. As Swift retires, he also steps down from his role as chairman of the board at Dawn Holding, with Microsoft executive David Porter filling his place.

The online retail partnership between Walmart and Gap will soon include furniture in addition to the decor, tabletop, bedding and bath selection the brands co-launched in June. Walmart executive vice president of home Anthony Soohoo made the announcement in a blog post on the company’s site, noting that the new segment was created in response to a continuing trend amongst Walmart shoppers spending more time at home and “nesting.” The 150-item rollout will include sofas, ottomans, TV stands, headboards, rugs and more.

Eleish van Breems Home has teamed up with Cabana for the “Traveling Chair” exhibit, for which various artists, designers and makers—including Luke Edward Hall, Rebecca de Ravenel and Carlos Mota—will customize a classic chair design by the Swedish retailer. The re-imagined chairs will be on exhibit at both the Schumacher showroom in the D&D Building in New York and the Eleish van Breems Home store in Westport, Connecticut, before being auctioned in an online sale to benefit the Design Leadership Network scholarship fund.

Milwaukee-based financial services company Northwestern Mutual partnered with Modsy to offer two new women-focused services after the interior design online platform conducted a report that found that only 48 percent of women working from home have a dedicated office space (compared to 61 percent of men) and 57 percent of Americans would like to leave their current career to pursue something they’re more passionate about. As part of the initiative, women can receive a free 15-minute design consultation with a Modsy expert to help create an at-home workspace, while Northwestern Mutual is offering free financial advising sessions to aid women seeking a career change to pursue their passions. For more information, click here.

On Pinterest, designer Kelly Wearstler has debuted a new episodic series of short videos called Fête Styling. In the clips, Wearstler instructs viewers on how to style spaces for fall and winter, demonstrating everything from extravagant floral mantelscapes to “avant-gourde” compositions of pumpkins in sculptural shapes.

The annual Rooms With a View showhouse in Southport, Connecticut, opens for public viewing from November 5 through 7, showcasing design vignettes within the cozy rooms of the historic Southport Congregational Church. Billed as a “sound bite version” of a designer showhouse, this year’s space was re-imagined by 12 designers, including Eneia White, William Lyon and Fiona Leonard.

Over the last decade, many fashion retailers designed their stores with a sparse, white minimalist style in mind. While the approach puts the consumer’s focus on the product, the search for the ultimate simplistic interior has led to many interchangeable spaces. For Business of Fashion, Chavie Lieber tracks how consumer tastes have recently swung in the opposite direction, toward vibrant, maximalist aesthetics—and what retailers are finding as they slowly begin to follow suit.

It’s no secret that the global supply chain is a mess. As manufacturers and big-box retailers attempt to assuage things on their end, designers are finding a myriad of ways to take matters into their own hands. From rooting out local artisans to searching for one-of-a-kind pieces, The Wall Street Journal takes a look at a few creative workarounds.

“Buy Nothing” groups on Facebook shot to popularity in recent years, operating on the principle that members can offer items to their community members for free, for trade, in exhange for their time or talents—anything but money. The New York Times takes a closer look at the customs these groups have adopted and the items that have changed hands, including everything from leftover pickle brine and dryer lint to used furniture and household items.

The Black Artists + Designers Guild has selected the awardees for its inaugural Creative Futures Grant, which recognizes visual arts, architecture and interior design students who explore how Black traditions can transform to meet future demands. This year’s honorees, who will each receive a $5,000 award and mentorship to support their project from ideation to implementation, include undergraduate architecture student Abena Otema Danquah of the Rhode Island School of Design; Janiya Douglas, an undergraduate art history and curatorial studies student at Spelman College; LaRissa Rogers, a graduate student of new genres from University of California, Los Angeles; and Neysa Wellington, a graduate student of photography at the Tyler School of Art and Architecture at Temple University.

Luxe Interiors + Design’s RED Awards, which each year honors innovation in the fields of architecture, interior design and landscape architecture, will debut a category for residential excellence in design for the 2022 competition. The full list of categories spans different types of design projects and a variety of product segments. For more information or to enter, click here. 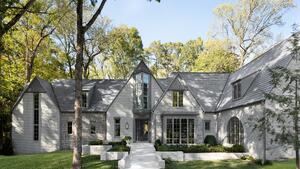