For its latest collaboration, West Elm turned not to a breezy-chic influencer with tons of followers or a severe Scandinavian designer in square glasses. Instead, the company is working with nearly two dozen independent artists from Kenya, Chile, Russia, the U.S. and more countries, via a partnership with Minted, the artist marketplace driven by consumer feedback. Their patterns, prints, brushstrokes and pencil marks appear on a vibrant new collection of upholstered furniture, available now.

Customers in West Elm stores and online will find a line of 14 pieces with patterns by 21 artists, whose work was voted on by millions of consumers and narrowed down by Minted’s proprietary algorithms. The art site’s entrée into furniture includes more than 2,000 customizable combinations of patterns, colors, leg finishes and furniture silhouettes to choose from.

“We’re proud to partner with West Elm on our furniture debut. Our collaboration amplifies the work of a diverse array of artists from around the world,” Mariam Naficy, the founder, co-CEO and chairman of Minted, said in a press release.

This is not the first time the two companies have partnered: Minted has offered fine art through West Elm since 2013. Naficy shared with Business of Home that the collaboration was sparked by customer demand during the pandemic. “We offer some soft goods on our site—pillows and accessories—and the interest in all of that was so strong that you could see it would be a natural fit,” she says. “We don’t necessarily see that ending after the pandemic, because we're still seeing people working from home a great deal, looking around and really spending a lot of time in their home. And so, for us, it was a natural move.” 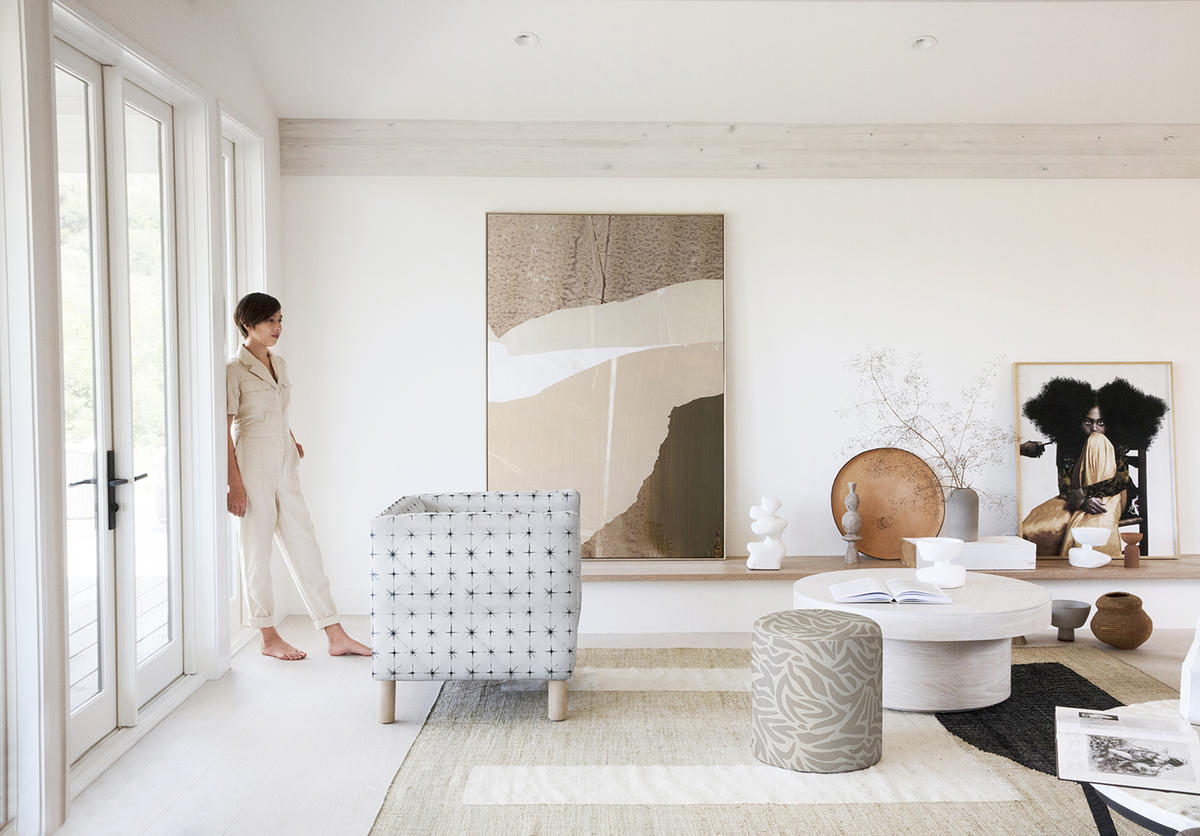 The Relaxed armchair from Minted + West Elm is covered in the Shibori Diamond print by artist Jennifer Lew of San Francisco. The Drum ottoman is wrapped in Abstract Leaves by Magdalena Kucova of Plzen, Czech Republic. Minted

And for West Elm, it was a departure from their solid-colored furniture. Among the artists’ prints are a wispy, seemingly penciled illustration of birds by Geneva-based Maria Eugenia Murphy and a series of 1980s black zigzags with visible brushstrokes on peacock blue ground by Angela Simeone of Nashville, Tennessee. The designs are often available in multiple colorways (such as a shibori by Sweta Modi of Mumbai, India, that comes in navy, gray, sand or dusty pink), and new patterns will drop later this year during the holidays and in spring 2022. The furniture pieces include headboards, an armchair, a storage bench, several ottomans and two screens.

“We wanted to have presence in all areas of the home, from living room to bedroom, so we made sure we’ve got these accent pieces available,” Naficy says of the ottomans and screens. “In terms of the patterns, it was [about] showcasing a diversity of points of view of the artists themselves [and] different countries, [as well as] working with our team to come up with a color variety.” Those final decisions were a close collaboration of both companies’ design teams and Minted’s home furnishings adviser, Christiane Lemieux. 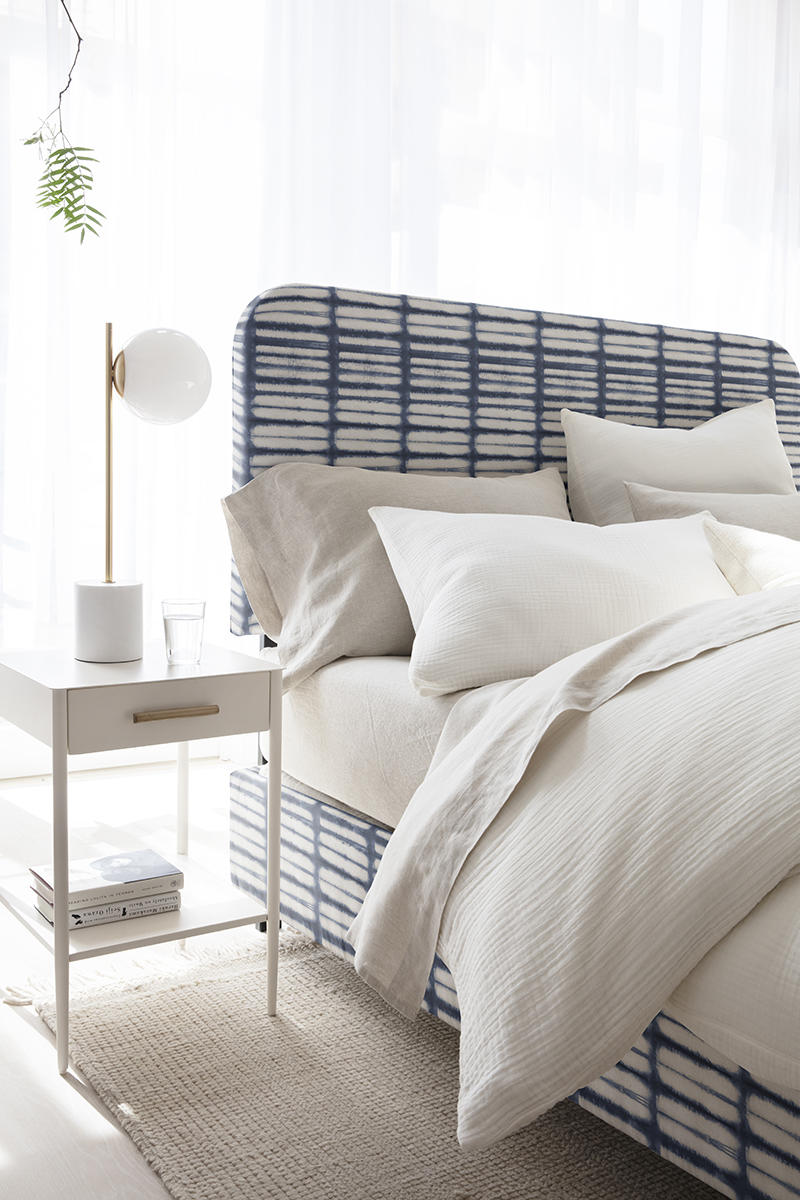 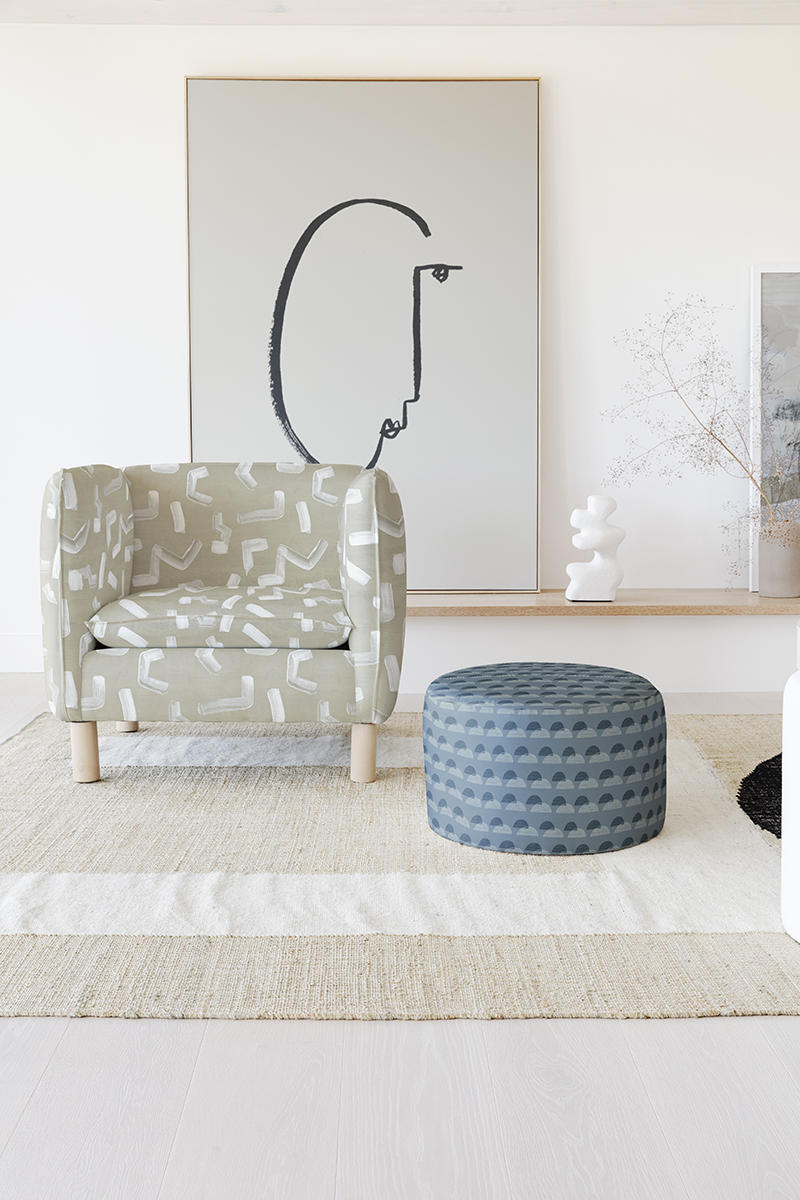 As with Minted, the artists earn a commission for their work with West Elm (somewhere between 6 and 10 percent, depending on the product). Customers will see the artist’s name, face and location with the swatches, and can learn even more about them on Minted.com—a special opportunity for indie creatives to gain an international fan base. “A lot of customers go to the [digital] storefront and then contact artists directly, sometimes to commission original work,” says Naficy.

If 2,000-plus combinations sounds overwhelming, she points out that West Elm’s tools, both online and in-person, help narrow down the options. Product detail pages populate renderings of the pieces when users click on different patterns and colors, and the retailer’s styling teams can help discuss decisions further. The upholstery fabric is a linen cotton that Naficy chose herself. “We picked it, ultimately, because it had such a luxurious feel,” she says. “It printed incredibly well; the ink was really saturated and rich. And I’m a real stickler for printing quality, ingrained in me since I started Minted 15 years ago.”