Designers’ Guide to summer in the Hamptons

Puppies with Peter Marino, midsummer cocktails at Alex Papachristidis’s Bridgehampton abode, showhouses large and slightly-less-so … Summertime in the Hamptons for designers has, historically speaking, been legendary.

Everyone’s favorite season is just a week away, and with it are the events, large-scale and intimate alike, that render the Hamptons one of the most compelling places for interior designers this time of year. We’ve culled the newly debuting and the longstanding events that make these months what they are. Open up your iCal and get your RSVPs in order—we’re heading out East. 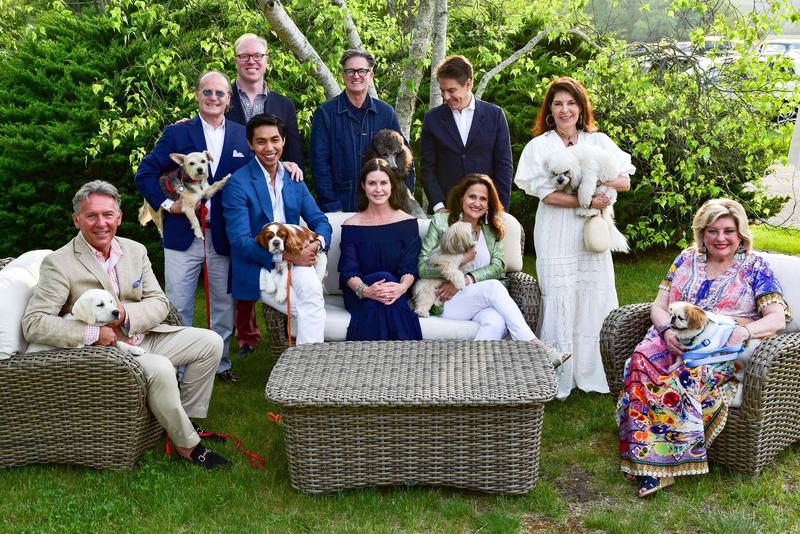 One Kings Lane Returns
Like last year’s debut brick-and-mortar, the summer’s One Kings Lane shop features a complete update to reflect this season’s new product and current trends. It also uses a “living assortment,” meaning the layout is in flux as pieces are bought right off the store floor. The space will also host a selection of events throughout the summer. 11 Jobs Lane, Southampton. Open 7 days a week, 10 a.m.–6 p.m. (subject to change on holidays) 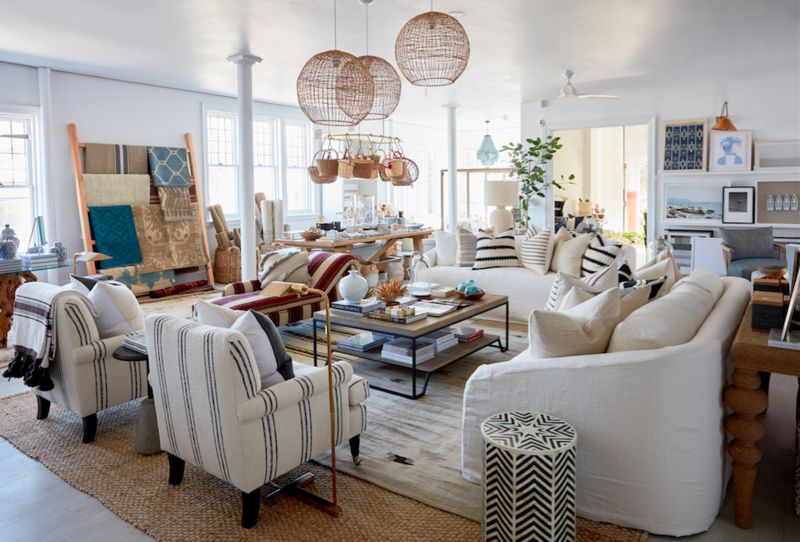 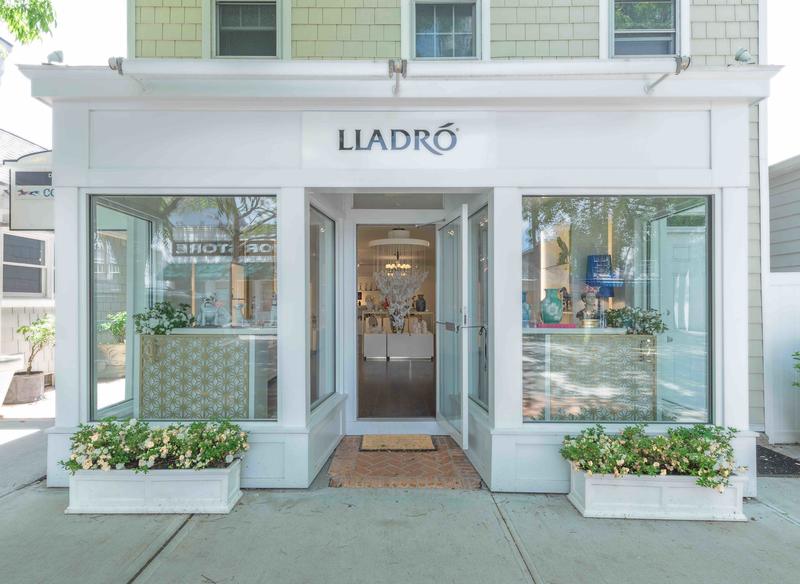 Domino Rumors
Our sources confirm that “It’s likely Domino will be popping up in the Hamptons” this season, but further details aren’t available just yet. Check back here for more as the news unfolds! 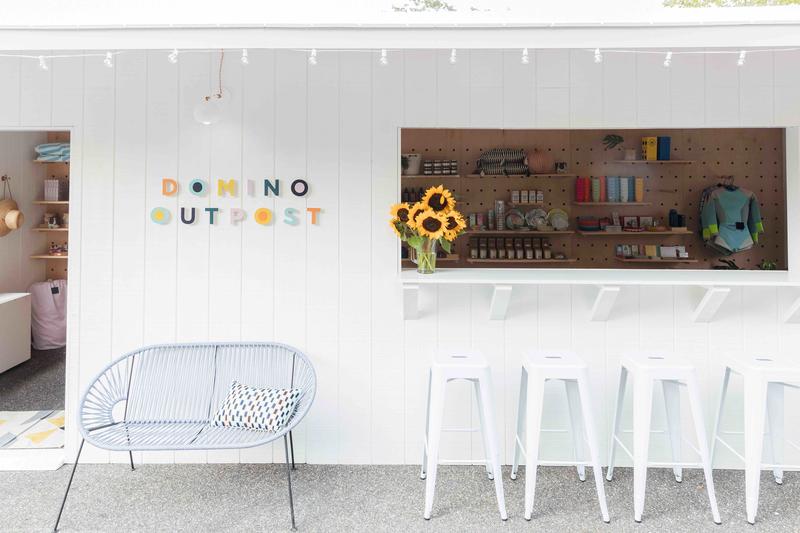 Rumor has it that Domino will be popping up out East this summer; courtesy Domino.

Much Ado About Madoo Garden Party and Market, June 15 and 16
The conservancy’s self-described “most beautiful party of the summer” will celebrate board president Jane Iselin, who retires after six years as the head of the foundation; the Garden Cocktail party takes place June 15, and the Garden Market, happening the following morning, will feature two dozen–plus plant, home and garden, fashion and gourmet vendors, with 10 percent of purchases benefiting Madoo. Also at Madoo this month: designer Mark Epstein will celebrate his new book, Mark Epstein Designs, with a garden party and book signing on June 23. 618 Sagg Main Street, Sagaponack. Purchase tICKETs. 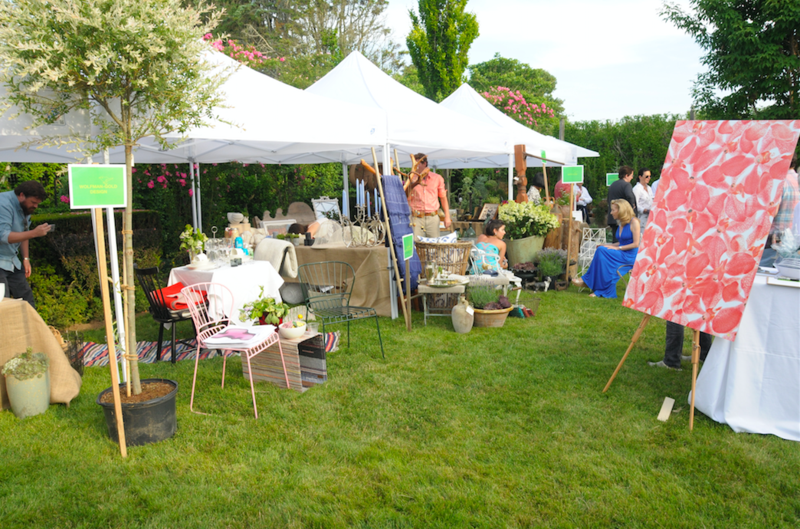 For the Love of Animals, June 30
Designers Austin Handler and Jennifer Mabley shared this must-attend local animal welfare group benefit with us: For the Love of Animals, held in Watermill, near the couple’s home and design studio, will benefit RSVP Inc., an animal organization that is known for its outreach, animal welfare education, advocacy and legislation. (RSVP Inc.’s team helps take care of dogs left outside throughout the East End of Long Island, in addition to teaching children, rehabilitating dogs, and working with local government officials to better animal care in the area.) Says Handler, “They are a very passionate group of volunteers dedicated to caring for animals, advocating for animals, and fighting for animal rights … and we want to help support their work and their mission, and we want spread awareness of their organization and all that they do for animals.” Private residence. purchase tICKETS. 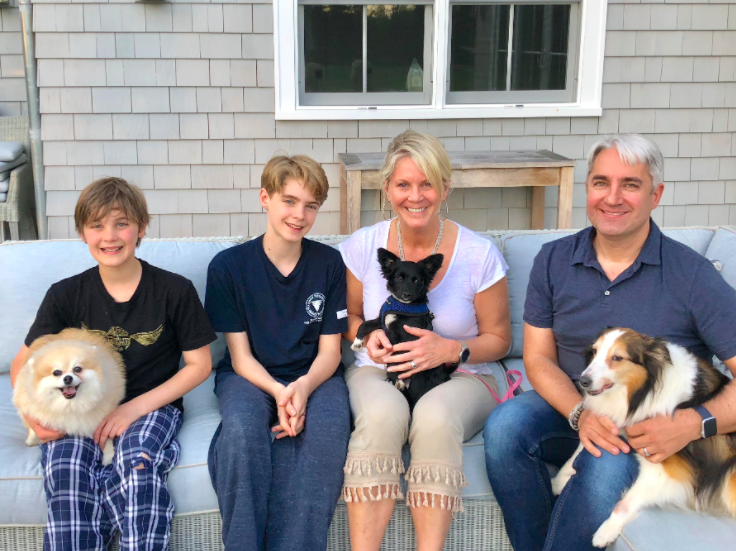 The Mabley Handler family (here, with their dogs, including a recently adopted rescue from Puerto Rico), will be supporting the For the Love of Animals charity event this month; courtesy Austin Handler. 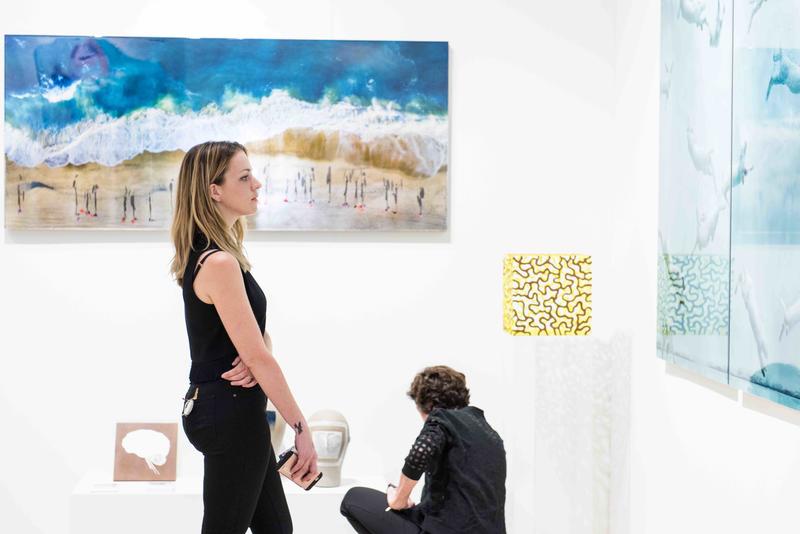 The 2018 Halsey House Gala, July 7
Laura and Jim Freeman, Steven Stolman and Rich Wilkie are co-hosting this year’s gala, which hews to the theme “Summer of Love,” creating a late-1960s atmosphere that will benefit the Southampton Historical Museum. The gala unfolds at the town’s oldest home, set to music by DJ Twilo, while a silent auction will put on the block a cocktail cruise on a wooden sailboat, antiques, baskets of organic produce, and Hamptons restaurant offerings. Thomas Halsey Homestead, 249 South Main Street, Southampton. Purchase tICKETS. 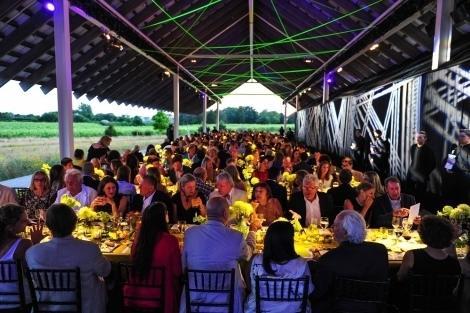 And don’t forget to attend the hot-ticket Late Night Party, held in the Lichtenstein Theater. The museum is also hosting other initiatives this summer, like PechaKucha Night (PechaKucha meaning “chitchat” in Japanese), a gathering to discuss creative living in the Hamptons. 279 Montauk Highway Water Mill. RSVP. 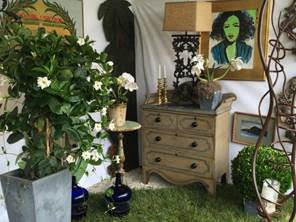 “I have had the extraordinary pleasure of calling East Hampton my treasured getaway for over a decade,” says Sanders. “Precious few places compare to the East Hampton mystique of peaceful escape, so I proudly join all those who are grateful for the mission of the East Hampton Historical Society—that of collecting, preserving, presenting and interpreting the material, cultural and economic heritage of our town. I am truly humbled to have been asked to serve as this year’s honorary chair.” 101 Main St, East Hampton. Purchase tICKETS.

“Serious Moonlight” is this year’s theme at the yearly fundraiser, but it’s not the only themed event unfolding this summer. Also on tap are botanical Shakespeare concerts, TWILIGHT TOURS of the grounds, CONVERSATIONS with female artists, and more. 133 Hands Creek Road, East Hampton. Purchase tICKETS. 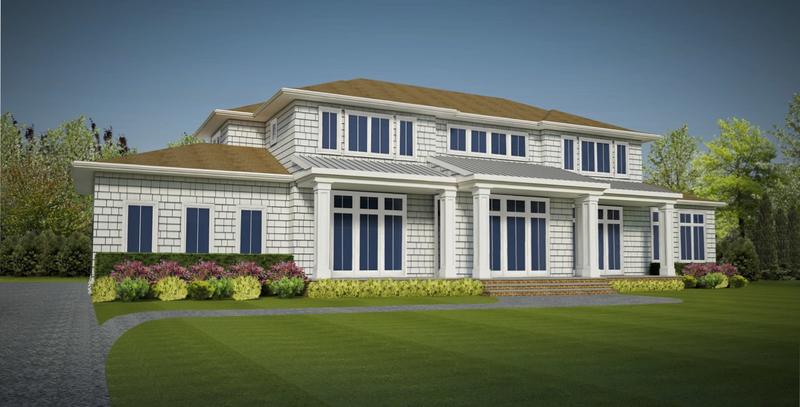 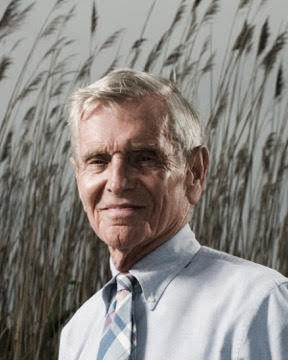 “Harry Bates is the unsung modernist hero of the Hamptons,” says Kendell Cronstrom, editor in chief of HC&G and NYC&G. “While other architects—[Richard] Meier, [Charles] Gwathmey and [Norman] Jaffe—might have gained more recognition during their careers, all took cues from Harry, who moved to the Hamptons in the 1960s and never looked back.”

Watermill Show Home, July 29-August 12
Run by home builder and designer Kristen Farrell of Farrell Builders Company, the Watermill Show Home is the first of its kind for Farrell. In partnership with Sherwin-Williams Paint, which launches 24 new colors exclusive to Kristen Farrell Home, and outfitted with Mitchell Gold + Bob Williams furnishings and Sub-Zero/Wolf appliances, the inaugural showhouse will benefit a selection of Hamptons' charities. Learn more.

ARF Bow Wow Meow Ball, August 18
The most significant fundraiser of the Animal Rescue Fund’s calendar year, the Bow Wow Meow Ball has helped the organization triple the number of animals it has adopted—now totaling over 1,650. It’s not the only fun ARF will be hosting this summer—earlier in the season, the annual Designer Show House at the ARF Thrift Shop in Sagaponack, chaired by Gordon H. Hoppe, Alex Papachristidis and Marshall Watson, celebrated the summer kickoff.

Hamptonites and visitors alike can stop by throughout the summer at ARF-hosted mobile adoption events. And, in the fall, the org will host ARF’s Stroll to the Sea Dog Walk in East Hampton. But return visitors, take note: The annual Garden Tour event has been canceled this year. ARF Adoption Center, 124 Daniels Hole Road, Wainscott. Purchase tickets. 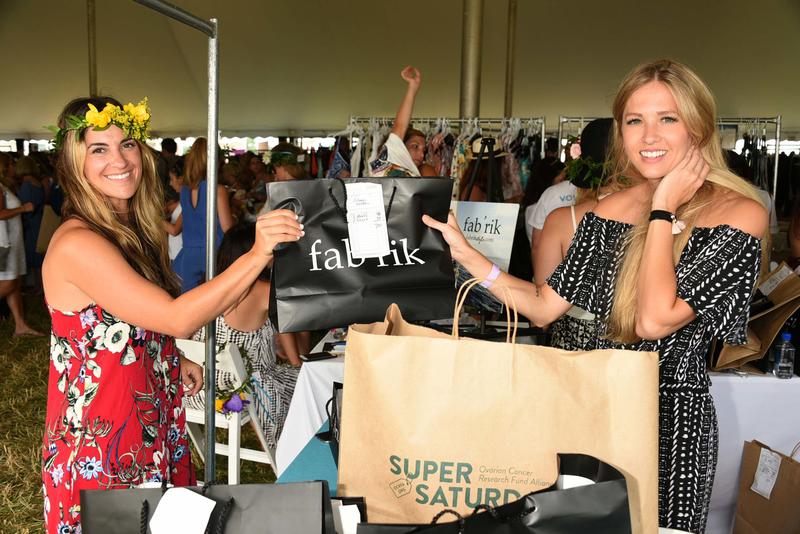 Super Saturday this year will become Super September, a multi-day event to be held in Manhattan; photo of last year's Hamptons event by Rob Rich/SocietyAllure.com.

Super September (formerly Super Saturday)
Super Saturday, the shopping event benefiting the Ovarian Cancer Research Fund Alliance, has transformed from a daylong celebration into a monthlong affair and two-day shop-a-thon (September 27–28). It is also switching locations, moving from its former home at Nova’s Ark Project in Water Mill to an as-yet-undisclosed location in Manhattan (Page Six POSITS that the Javits Center is one possible locale.) New features for this year include tastings, mixologists, virtual experiences and beauty bars. What will remain the same? Support for the OCRF, and many longtime favorite supporting brands from out East. Location TBD.