magazine | Nov 3, 2022 |
How ending a partnership opened up a new chapter for this Chicago designer

For Chicago-based designer Bruce Fox, leaving a junior partnership at another firm six years ago was the move that changed everything. Stepping into the spotlight and putting his name—and his name only—on the door unlocked a new level of creative freedom, personal fulfillment and business success. 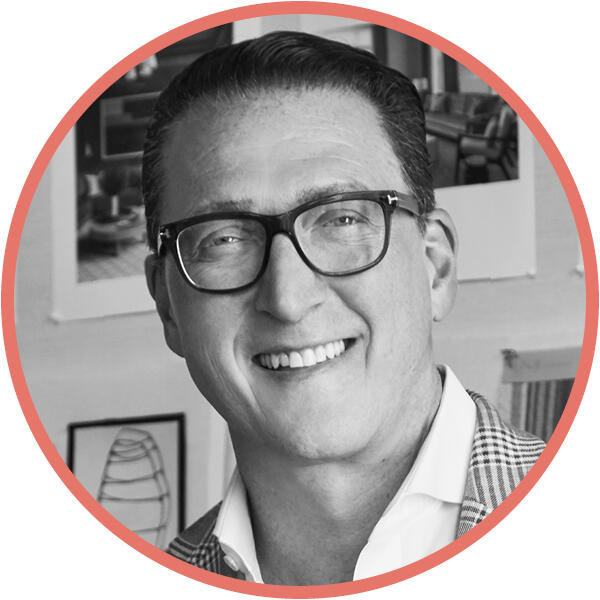 Was there something you had to change to help yourself spring ahead in your career?
I was in a business partnership, but I was not an equal partner. What changed everything was ending that partnership and putting just my name on the door. It went from Fox and somebody else—Wells and Fox—to Bruce Fox, and the psychology of that was huge. When you’re like, “Oh, it’s me—it’s my name on the door,” you act differently.

When did you know it was time to go out on your own?
I don’t think I knew it at the time—and for a while, I even considered moving to New York and working for a big firm. But then I thought better of it. I mean, I like Chicago and the Midwest, and I wasn’t young. At the time, I was turning 50. My ex-partner and I met in one city, and then she had a desire to live in another, which meant I was running the Chicago office. Eventually, I pretty much became the creative director for both offices. We had gotten to a great point of working well together, but I wasn’t a full partner, which was what I always wanted. One of my clients at the time said to me, “Bruce, you’re a junior partner, and that’s not good for your psyche.” And at some point, it was also like, “Why is the firm in two cities? It doesn’t make any sense.”

We were having conversations about me becoming a full partner, but it always came down to, “You’ve got to move.” But I didn’t want to move—I wanted to stay near family, and near things that make me happy. With that as my starting point, I realized that I wanted to be able to have the things that working hard and having your name on the firm can afford you.

How did that shift your thinking?
After that, I was like, “Wait, why do I want to be a partner?” A friend helped me talk it through one night, and I realized that we had to split. From that minute, that click, it was like, “OK, now I’ve made the decision. I can put it in place.” And then it was a lot of negotiation—because it’s basically a divorce, right? And it’s hard. But I have the utmost respect for my former partner. It was a divorce, and it was terrible, but we did get there.

You effectively split the firm in two. How did your role change when you made that shift?
The biggest change was that before, I wasn’t taking care of all the day-to-day business. I got to just do the creative. So I had to figure out the 401Ks, the employee manual and all of that once I was on my own. Beyond that, though, a lot didn’t change. It was just new stationery and a new website and my name on the door. It’s scary when you’re like, “Oh, my God, now I have to make this work by myself. I’ve got to pay this roomful of employees.” But there’s a thrill in that, too. I finally got to be like, “It’s me, not us. And it’s me not in the shadow of you.” So for me, it was like stepping into the spotlight.

How does that feel when you show up for work every day?
It’s funny, because the logistics didn’t change. It was the same office, the same commute, the same employees, and they were asking me the same questions. So it wasn’t any different, but it was also completely different. So much of it is just a feeling of being set free. You’re free to create your own destiny. You’re free to screw up.

The team was asking you the same questions, but there’s no one that you have to ask questions to, right? You’re at the end of the line.
Exactly. It’s the “buck stops here” kind of thing. And that’s interesting whether it’s an employee or a client doing the asking, because it definitely draws a line. It takes a village, of course, but I’m responsible for the good work with my team, as well as the mess-ups.

Long before the partnership started or ended, did you ever have the inkling that you wanted to run your own firm?
No. I was an integral part of a firm, and then became a partner, and for a long time, it felt like it was enough for me. And it really was enough, until it wasn’t.

That understanding of what it takes to feel fulfilled in any given role at the firm—to have a job that feels like enough, however you define it—how does that shape the way you run your team today?
When somebody gets to the point where you can tell [they’re restless]—because someone will get to that point when they have a lot of experience—I get pretty frank with them and say, “Do you see yourself owning your own firm?” Before I went out on my own, I was making tons of money for the firm, running an office of eight employees—and I was highly compensated for it. But it is different when you own the firm: You get a bigger financial payoff because you’re taking all of the risk. When I was in the middle of [leaving the partnership], a friend said to me, “You’re going to make a lot of money.” And I was like, “But that’s not the point here.” Sometimes you just want more. You want to be more fulfilled, and you just need more from your job. Certainly, because I was in that position, that’s always something I’m looking out for [in my staff]. You can tell when people aren’t happy in their role—and it’s often not that they’re doing a bad job. I just want everybody to be fulfilled, and I know that sometimes you need to shift to be fulfilled.