How these companies manage their far-flung supply chains

magazine | Jun 7, 2018 |
How these companies manage their far-flung supply chains

Companies sourcing from a complex web of overseas suppliers are constantly making (and managing) connections with manufacturers around the globe. 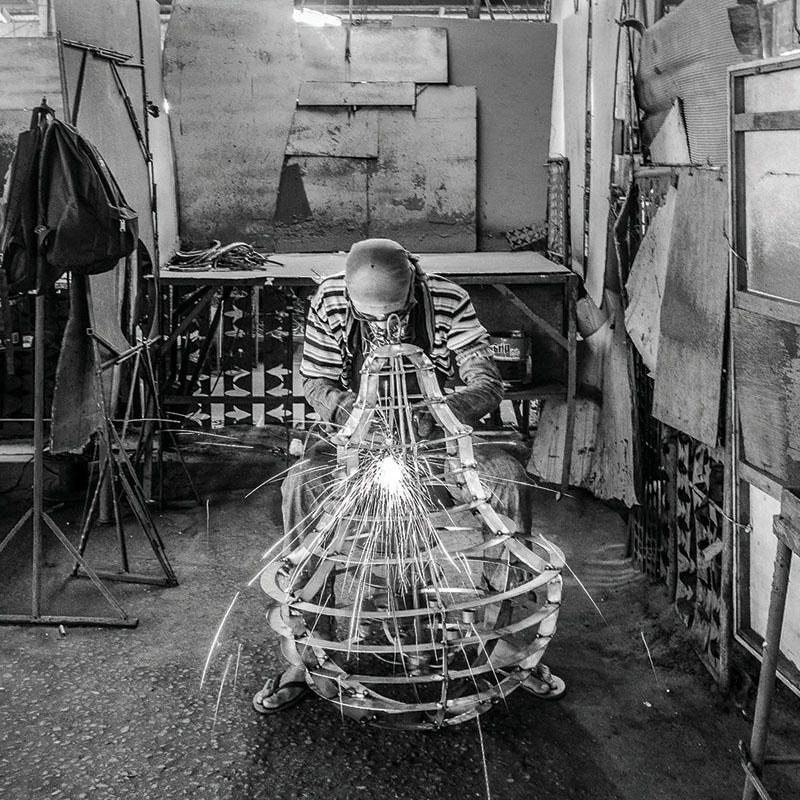 Artisan handwork is a hallmark of Currey & Company's collectionsBrownlee Currey

“It sounds so simple: We’re going to import container loads of product from other countries and sell it wholesale,” says David Gebhart, founder and CEO of Global Views. “It goes smoothly for the most part or we wouldn’t have a business, but it’s not without its moments.” (One particular story—about iron products that were manufactured in India during monsoon season and shipped to Texas—ends in “rust, mold, and everything horrible you can think of.”)

When Gebhart was in the early stages of launching Global Views, he went on a sourcing trip to Portugal, Italy, China, India and Mexico. The partnerships he built on those first visits 22 years ago still form the backbone of his business today. The company was recently recognized by a trade association in Portugal for its long-standing work with six local factories (four for ceramics, two for glass) in appreciation of the business it had brought to the regional economy. “We’ve worked really hard to grow and develop the relationships we started all of those years ago,” he says. “Those manufacturers have grown with us, and we’ve worked with them to improve their quality, to stretch themselves beyond the singular material they were working with when we started. By pairing our knowledge of design with their technical know-how and artistry, we make beautiful objects.” 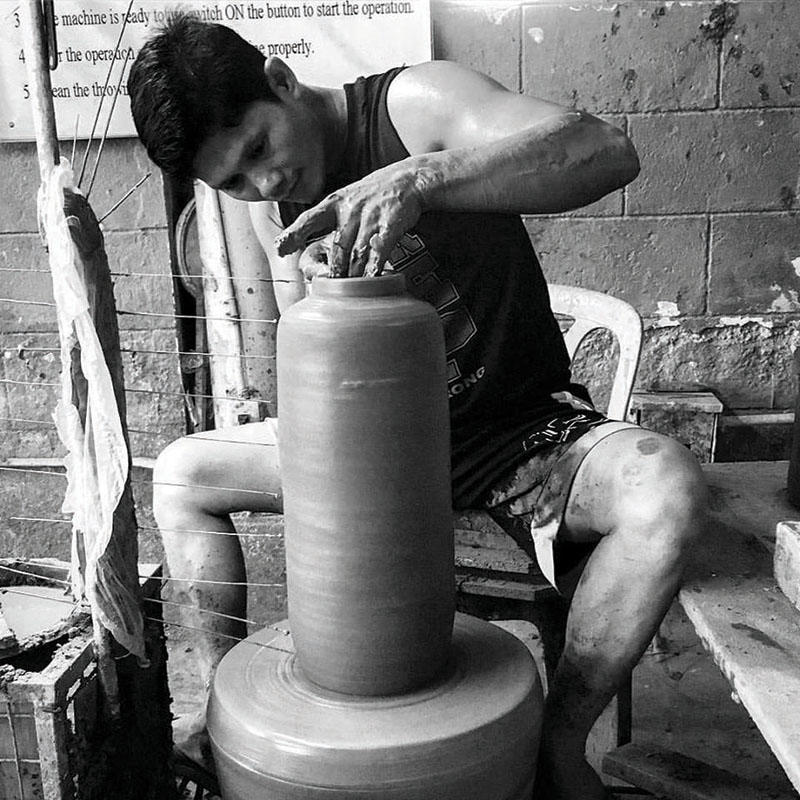 An artisan crafting a vaseBrownlee Currey

Over the years, as the company has added more product categories to its line, Gebhart has sought out new and additional sources—though not all of them pan out. “Sometimes you head down that path and everything is good, but other times you just can’t seem to get there. You have to know when to cut your losses.” On a recent trip to the Philippines, he toured five factories in three days with an agent. The site visits yield invaluable information. “You have to go the first time to really understand what they are doing, what materials and finishes they are working with,” he says. “You get a feeling for the people you meet, for their work ethic. We narrowed it down to one resource: a factory that had this very special technique they could do that none of the others offered.”

For several upcoming product launches, the search for the perfect partner has taken Design Within Reach’s sourcing team to Eastern Europe. “We’re learning there,” admits Katie Stamaris, DWR’s director of product development. “We’re constantly looking for the best partner for the best product. This area has a long history of furniture and craftsmanship that has been further explored by international companies in recent years. ​As they get discovered, they are getting more efficient and getting more technology.” For example, a Polish factory that had never worked with DWR will be producing a line of sculpted side tables made of turned wood. “We went to six places—including Italy, Vietnam, a couple factories in North America—but we found that this company was able to achieve the best quality and aesthetic at a price point we believe will be attractive to our consumer.”

If we’re doing a walnut program, it’s better to go with a company that’s already doing walnut for another client, because we’re going to get better efficiencies from the raw material.
KATIE STAMARIS

The company has also partnered with a supplier in Slovenia to make a new veneered cabinet series. “We may want to hit a certain price point, but we can’t compromise on quality,” says Stamaris. “We were talking to someone in Asia who was more expensive, and someone in Canada who was significantly more expensive.” The factory in Slovenia won out. “There are multiple considerations taken into account when choosing a supplier, not just price,” she explains. “We’re leveraging their relationships with their suppliers as well. If we’re doing a walnut program, it’s better to go with a company that’s already doing walnut for another client, because we’re going to get better efficiencies from the raw material.”

Finding the right fit is about more than just craftsmanship and price—production capabilities matter too. “Factories are often suited for making two or 10 of a product, or 10,000,” explains Stamaris. “We fall somewhere in between. It’s all about finding the people who can source the material, communicate well, and prioritize us.” Most products in the DWR line then make their way to a central distribution center in Kentucky. “We’re buying products from sources who assemble and deliver a finished product,” she says. There are a few exceptions to that model, but it’s rare—mainly because if there’s a defect with that product, it’s no one’s fault.”

Lighting and home furnishings manufacturer Currey & Company takes the opposite approach. “We might build a frame in the Philippines, have a bead kit made in India, and put them together in Atlanta,” says Cecil Adams, the brand’s creative director. His sources span the globe, and are selected more often for their capabilities (think: cast brass and beaded glass from India and sleek, brass-plated pieces with a machined look and precise glasswork from China) than convenience. More than 20 years ago, the company established a key relationship with a metal supplier in the Philippines to manufacture all of its metal frames, then built a finishing, wiring and assembly plant nearby that specializes in hand-applied mosaics and gold- and silver-leaf finishes. (There’s a second finishing and assembly plant at its Atlanta headquarters.) “From the moment Robert and Suzy Currey founded the company 30 years ago, the DNA of Currey & Company has always been to go around the world and find the most interesting, beautiful things.”

It’s about the product first. We ask ourselves where we can go to get the thing we want that feels like something we want to support.
CECIL ADAMS

The firm’s design team travels frequently to understand the capabilities of each manufacturing partner. “China has some amazing state-of-the-art factories, but most of the places we’re going are more primitive. Some of the handiwork is still being made in people’s homes,” says Adams. “With most of our materials, we work hard to maintain the touch of the human hand: Textiles are handwoven, pottery is hand-thrown, and iron is hand-forged. We don’t go somewhere just because of the price; it’s about the product first. We ask ourselves where we can go to get the thing we want that feels like something we want to support.”

North Carolina–based furniture manufacturer Century owns a casegoods facility and three upholstery plants in Hickory, but the luxury home furnishings giant still sources extensively abroad. “When we originally started importing 30 or 40 years ago, it was to pursue techniques and materials we couldn’t get in the United States,” says company president Alex Shuford III. “It’s become a hot topic in the industry more recently, but most companies have been importing components for quite some time. What changed was the mindset: When companies made the decision to import everything in a race to the lowest price, that’s when it became a factory killer in the U.S.”

Sixty percent of Century’s casegoods and nearly all of its upholstery is produced stateside. Another 20 percent is made in Hickory with imported components; 12 percent is made overseas and finished in the U.S.; and the remaining 8 percent is made entirely abroad. The company primarily imports carved wood, metal hardware and woven elements from its sources all over the globe. It is part of a global dance of interconnected suppliers, manufacturers—and competitors. “Some of our suppliers in Asia have showrooms a couple doors down from us in High Point,” says Shuford. “During Market, we’re selling against them. Then they come over to talk to us about their new machining capabilities for a future project.” Century even buys metal hardware for some of its chests of drawers from its biggest competitor. “It’s a little bit like Ford selling engines to General Motors,” he jokes. “But they run a really good foundry in Asia. They’re happy to have the business to keep the foundry full, and we need the high skill and quality level they produce.”

Some of our suppliers in Asia have showrooms a couple doors down from us in High Point. During Market, we’re selling against them. Then they come over to talk to us about their new machining capabilities for a future project.
ALEX SHUFORD III

Taking a global perspective opens the door for more creative products. “Before, you would draw and design things your factory could make. So if you had a factory that worked in veneer, you made a lot of veneer,”  says Shuford. Now, the focus is on creating pieces that will resonate with the market. But creating systems to manage all of the moving parts is a herculean operation, from finding the right factories to produce each component to coordinating the arrival of thousands of pieces and parts to the warehouse without holding too much inventory. For Century, most imported elements or frames are still assembled and finished in North Carolina so that clients can customize the piece. “We might make the top of a dining table 100 percent in our facility so that the size is variable. But the base has carvings, so we’ll import that and put a foot on it that we make here. The logistics and supply chain organization can get pretty complex.”

The focus is on building relationships with the best partners. “Finding enough people who could hand-carve is what drove the component part of our import business early on,” explains Shuford. “We’re looking to countries that value certain craft techniques.” He has only to look in his own backyard for a perfect example. “Here in North Carolina, we have a history of upholstery making,” he explains. “Once you have a capability like that, all of the associated businesses cluster around—the foam companies, cushion companies, the people making great frames and springs. If you tried to make upholstery in Iowa instead, you couldn’t get the components and talents to make it work. And the same is true of where we go all over the world: They’ve got the clustering of craft and capability.”