The big reveal is everything. Here’s how to nail it

After months (or years) of hard work, it’s finally the moment you and your clients have been waiting for: They get to see their new home. The design process inevitably has ups and downs, but a moving reveal can be the memory that sticks.

On the show Extreme Makeover: Home Edition, there’s a climactic scene in each episode where the family waits behind an enormous bus as the show’s host—Ty Pennington in the original, or Jesse Tyler Ferguson in the reboot—builds anticipation in the gathered crowd before unveiling the newly remodeled home. That’s exactly the level of excitement Bartow, Florida–based designer Donyea Tollie is striving for with each and every reveal—and she says that delivering a climactic “Move that bus!” experience is everything her clients are hoping for.

“They watch HGTV and interior design shows, and that’s what it’s all about,” she says. “They’ve done all the hard work [and made] the hard decisions. It’s all come to this moment, and now they actually get to enjoy it. I’ve never done it any other way.”

While Tollie forgoes the giant bus, her reveal is a highly coordinated production in its own right, complete with precise timelines, a bit of videography and plenty of showmanship. Ideally, it all goes down in the 30 minutes before dusk—that way, clients can see their space in a bit of natural lighting and then illuminated by their new fixtures. As the clients arrive on their front step, she greets them with glasses of champagne and a small speech before asking, “Are you ready to see your new space?” As they walk inside, Tollie follows with her phone in hand, capturing their reactions. “Most times during a reveal, the wife will cry—and I’m trying not to cry, too, because it’s as happy for me as it is for them,” she says. “It’s your baby when you’ve been working on the project for so long.”

For many designers, the ability to orchestrate an impactful reveal hinges on a client’s willingness to stay away from home throughout the install process. Richmond, Virginia–based designer Sara Hillery once had a client who couldn’t resist drive-bys during this step, just to take a peek from the outside. Hillery often sits down with clients to explain the reasoning behind keeping them away during install: It’s a mess—until the final moments when it’s not. Aside from the long hours and occasional mishaps, she explains that the last design days involve spraying, ironing, making sure draperies are hanging right and lamps are just so, with harps in alignment with the base and shades adjusted so seams aren’t exposed—tasks that aren’t any easier with someone peering over your shoulder.

The pandemic has further complicated the process, thanks to shipping delays and extended lead times. Still, Hillery tries to maintain smaller elements of the reveal by installing in phases—all of the lighting at once, for example—and making things as functional as possible from the start. For every one of these mini reveals—even if clients leave the property for just a day—she follows her “five senses rule” for presenting a new space when they return: lighting aromatic candles, playing music, setting out a favorite treat, getting the lighting just right, and of course, allowing homeowners to touch and feel their new space once they walk in.

Some designers take a harder line when it comes to the install. For instance, New Rochelle, New York–based designer Joy Moyler has implemented her firm’s “rules of engagement” to ensure there is, in fact, no engagement—clients are kept strictly off-site and not contacted during the last stages of the design process. More than anything, Moyler explains, it’s a matter of safety. During an install, her team is a well-oiled machine: They dedicate one room to unboxing items, assign indoor and outdoor spaces for staging, designate specific spots for compiling trash, and delegate runners to transport small objects to the areas where they’ll be installed. “You don’t want people tripping over boxes or walking over Bubble Wrap, making that pip-pip-poppity-pop sound all over the place,” says Moyler. “It also keeps items protected—there’s often expensive art on the walls, and you don’t want someone tripping over a box and slamming into a Picasso. It’s easier to do things in a simple and safe way.”

Upon clients’ arrival, Moyler has baked goods warming in the oven (“so they have that smell like grandma’s kitchen”) and drinks at the ready. She takes special note of the first words out of the homeowners’ mouths, considering their initial impressions a unique kind of feedback. “When I did John Mayer’s New York apartment, his response was, ‘Wow. I finally have a grown and sexy home that’s better than any hotel I’ve stayed in on the road.’ When they know they can put roots down, that’s the best thing ever,” she says. The duo have gone on to tackle two more homes together.

Other designers feel less urgency to evacuate clients before the install. Dallas-based designer Josh Pickering instead invokes the element of surprise simply by introducing accessories and small items that catch the client’s eye, or by reintroducing their existing pieces in a new way. On one project, he redesigned a living room to create a more livable layout, employing the client’s neglected piano as a central piece. “It’s exciting when clients see pieces come back to life in a bright new way,” says Pickering. Upon seeing the revamped space, the client with the piano said she would sit down and play it again just to spend more time in the room.

Phoenix-based designer Jenelle Lovings prefers a gradual release that loops clients in on the process as it unfolds. For her, the goal isn’t surprise but exactitude—she strives to bring her initial design renderings to life as closely as possible. At the end of each project, she provides clients with a book of the renderings alongside photos of the completed space, hoping to provide a mirror image of the team’s initial vision. 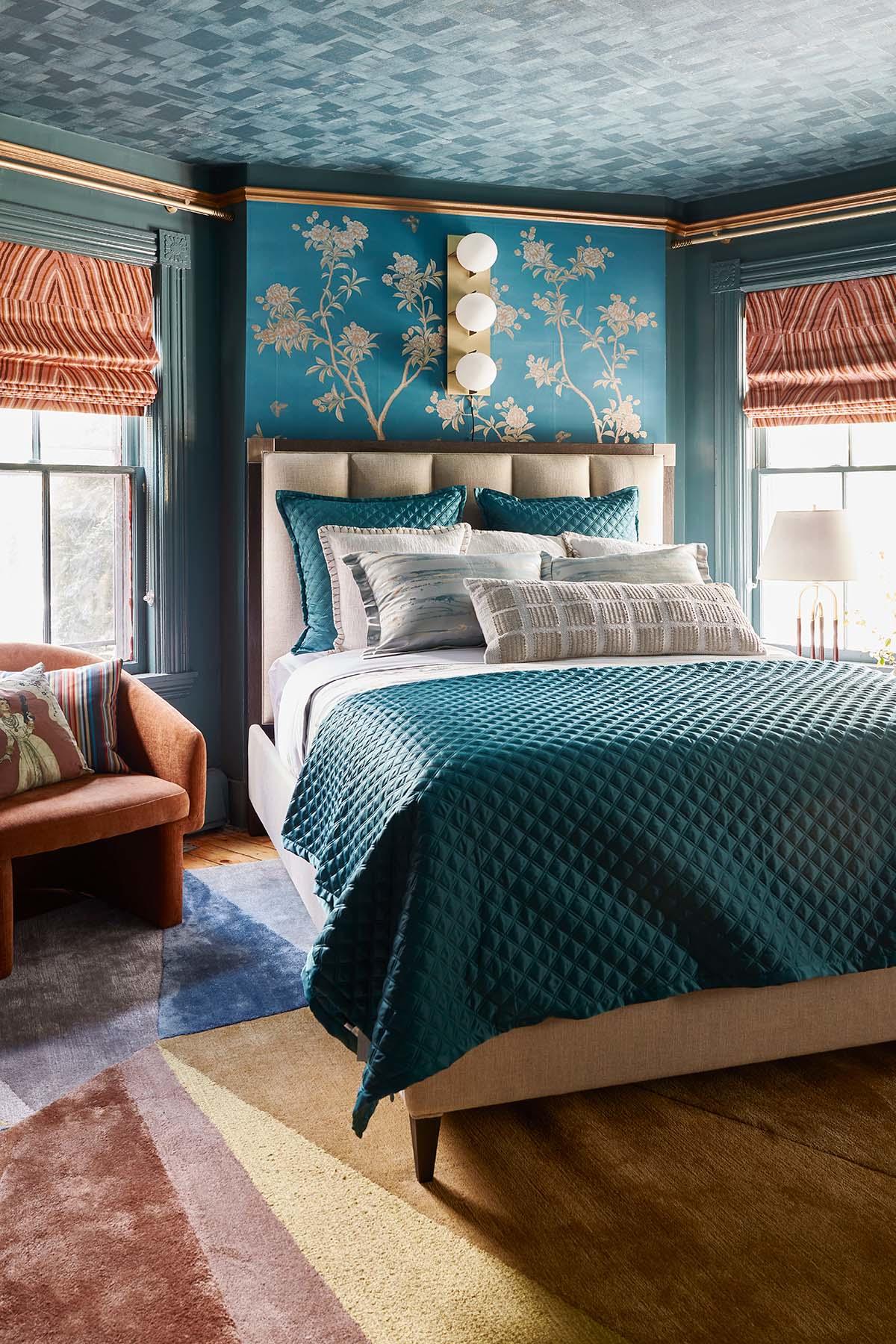 The parting gift is an opportunity to top off the special moment with a final flourish. Hillery leaves clients with a book of professional photos, depicting the design process from start to finish and adding personal messages, from funny anecdotes to meaningful quotes. Rydhima Brar of the Los Angeles–based R/terior Studio kicks it up a notch with a different kind of present: a mini getaway so that the clients aren’t underfoot during the install, and a custom cocktail when they walk in the door for the first time. (Asking clients to identify their favorite drink is part of the designer’s intake questionnaire.) “I will offer clients a gift card to a hotel or an AirBnb to give them a vacation-like experience while we install,” she says. “The past year and half, it hasn’t been as large-scale, but it’s always the goal to have the jaw dropping moment of walking into the new space. The design process has a lot of ups and downs—you start with excitement, but there are always sacrifices and challenges. I want my clients to see how the stress and anxiety are all part of the process of making a gorgeous home.”

Beyond giving clients a fun and unforgettable introduction to their new home, the final reveal is an opportunity to communicate a designer’s availability for remaining fixes, future remodels, or jobs for the client’s family and friends. For Lovings, the reveal is one last chance to show clients you’ve thoroughly grasped their taste and preferences—and who they are as people. “Obviously, it’s a business, and you’re doing a service for somebody, but make it comfortable,” says the designer, who sends occasional emails or texts to check in on clients and make sure the space is still serving them. “Go ahead and relax and be professional, but try to make a friend, if possible. Those projects always turn out the best.” Moyler also considers her projects open-ended. “I become so connected with my clients that I don’t think they’re ever really over,” she says, crediting her brutal honesty with helping her build trust and forge those deep relationships. “There’s an evolution where they’ll want to add things a year down the road, or they’ll have a party and invite me to style that. The most wonderful part of the business is continued relationships. They see you as someone who really gets them, who is part of the team and their life.”

Homepage image: For projects like this Florida home, Donyea Tollie likes to create a TV-worthy reveal, greeting clients with champagne in hand for an emotional tour of their new space.
| Tina Sargeant