Last week, the world mourned the passing of Queen Elizabeth II, whose 70-year reign included ribbon-cutting occasions for some of the country’s most significant spaces—including five museums, two airports, a cathedral, an opera house and four parliament buildings. Stay in the know with our weekly roundup of headlines, launches, events, recommended reading and more.

The Dallas edition of the Kips Bay Decorator Show House, usually open to the public for monthlong viewings, was shortened to four days after objections raised by a local homeowner’s association. As PaperCity reports, though the showhouse has taken place in Dallas’s Preston Hollow neighborhood for the past two years without issue, this year’s installation schedule was unexpectedly derailed several weeks ago with the arrival of a stop-work order. The halt was instigated by the Inwood-Northwest Homeowners’ Association, which raised concerns about traffic congestion and pushed for the showhouse—a fundraiser for the Kips Bay Boys & Girls Club—to be recategorized as a commercial event. After failed negotiations between the two parties, the dispute went to the city government, which issued its decision. The showhouse will be open from September 22 to 25. “Right now, it’s all about making the most of those four days and maximizing the exposure for the designers,” Nazira Handal, director of special events and corporate partnerships at Kips Bay, told PaperCity.

RH purchased the long-abandoned site of a former resort in Napa, California, with plans to transform the property into a hotel and winery, according to an announcement made by CEO and chairman Gary Friedman during last week’s earnings call. Though the purchase price was not disclosed, SFGate reports that the 857-acre property, formerly known as Napa Soda Springs Resort, was listed at $50 million in 2019—which also marked the first time it had been on the market in 40 years. Originally opened in 1856, the spot served as a getaway for well-off travelers drawn by the on-site mineral springs, which were historically believed to have healing properties. Though RH did not detail further plans for development, Friedman also alluded to another forthcoming acquisition during the call, this time for a property in Europe.

In honor of its 150th birthday, Bloomingdale’s took a major step into the metaverse with the debut of a new digital store. According to AdWeek, customers can “walk” through the futuristic space and browse exclusive collections from designers like Ralph Lauren, Marc Jacobs and David Yurman, along with home items such as a Giuseppe Nicoletti–designed chair and Lalique’s Languedoc vase. Created in collaboration with virtual reality startup Emperia, the space is designed to appear as a store floating in the clouds above the Manhattan skyline.

During the pandemic, Americans preferred moving to warmer, more affordable regions, The Washington Post reports, with many favoring Southern cities like Atlanta, Charlotte and Nashville over coastal locations. According to the 2022 Hottest Zip Codes report from the website Realtor, however, that trend has now reversed: This year, more than half of the top 10 have been in New England. The report takes into consideration how fast homes sold in various zip codes, as well as how many people viewed each listing. Taking the top two spots were Brighton, New York, and Nashua, New Hampshire, followed by several others that stuck closely to New England, with just two outliers in Ohio and Tennessee.

Bassett Furniture announced the acquisition of Montreal-based e-commerce furniture retailer Noa Home, Furniture Today reports. The full terms of the deal were not disclosed, though Bassett did note that the purchase included, in Canadian dollars, 5.7 million for debt repayment and 2 million to Noa Home’s co-founders. As Bassett chairman and CEO Rob Spilman told FT, the acquisition will allow the company to benefit from Noa Home’s digital commerce abilities, providing Bassett with an improved online presence and more digitally native consumers.

Furniture resale marketplace AptDeco, which previously served the Northeast and San Francisco Bay area, announced a national expansion. Originally launched in 2014, the company handles the logistics of buying and selling used furniture online, facilitating pickup, delivery, assembly, payment and scheduling. It will now allow buyers and sellers from across the country to engage in the platform.

West Elm partnered with direct-to-consumer office furniture manufacturer Branch for an assortment of furnishings and decor designed for small- to medium-sized businesses and remote workers. The partnership marks Branch’s first foray into collaboration with a major retailer and was created with a focus on ergonomics and affordability. 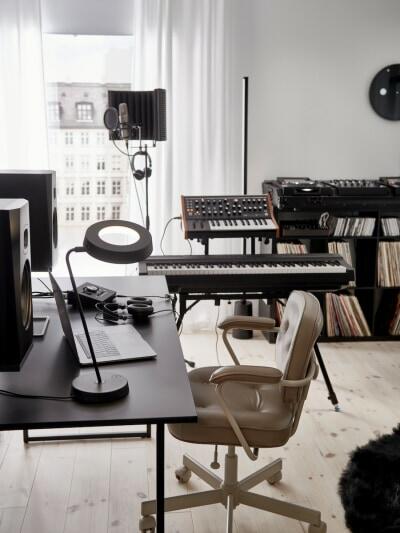 Swedish furniture retailer Ikea teamed up with its compatriots from EDM group Swedish House Mafia for an assortment of products used to produce and perform music at home. As Insider reports, the collection is called Obegränsad (or “unlimited” in Swedish) and was designed with the help of the group’s three members, Axel Christofer Hedfors, Steve Angello and Sebastian Ingrosso. Decked out in a sleek all-black color scheme, the launch includes wall and floor lamps; stands for laptops, speakers and records; rugs and other accessories—plus, the matte black record player debuting in the collection is Ikea’s first since 1973.

Houston-based designer Nina Magon launched her first retail home collection with a residency on the seventh floor of New York department store Bergdorf Goodman. The assortment includes furniture, lighting, tabletop and accessories created in partnership with Bergdorf and a variety of artisans and brands based in the U.S. and Europe, including marble pieces crafted in Turkey and porcelain dinnerware manufactured in Portugal.

The newfound accessibility of text-to-image generation tools like Dall-E 2 and Midjourney has allowed everyday tech users to conjure up otherworldly images with the input of just a few words. As Nate Berg reports for Fast Company, now designers and architects are venturing into the emerging technology, utilizing the tools to test out new project approaches, envision early-stage concepts and get clients more involved in the design process.

In 2021, solar energy became the most affordable source of electricity globally—yet the “solar revolution” that experts have been anticipating for more than a decade has not yet come to pass. As Katie Treggiden writes for Dezeen, the issue is partly one of accessibility, with the onus falling on product developers to integrate solar technology in creative and aesthetically pleasing ways. However, the slow pace of solar adoption brings up a larger point: Instead of waiting for alternative energy sources to get the job done, Treggiden argues, architects, industrial designers and interior designers must place a greater focus on reducing energy consumption in the first place.

Formica Corporation announced the opening of its sixth annual Form Student Innovation Competition. The contest invites students to design a piece of furniture for residential or commercial settings, incorporating the creator’s interpretation of maximalism with the use of three or more Formica or Fenix brand products. For the first time this year, the competition is open to students in Mexico in addition to Canada and the U.S. For more information or to apply before March 6, 2023, click here.