Equal parts coach, designer and businesswoman, Holly Hunt set out not to take over the interiors landscape but to support her family after a divorce. In the process, she built her own empire—and sold it to Knoll for $95 million. 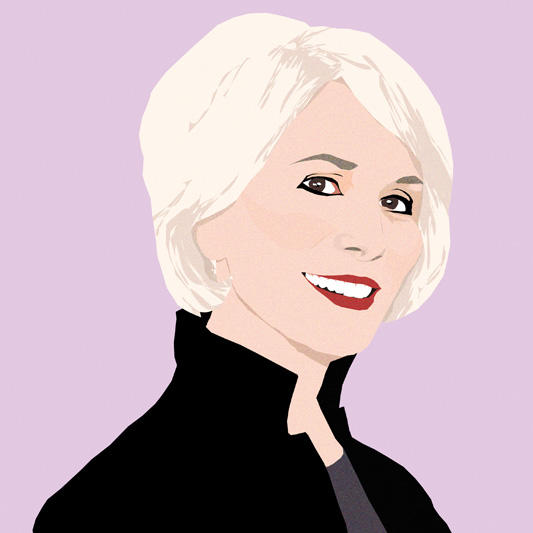 My first job after college was in retail, and I learned everything I know about business in those four years at the department store. The rest has come as I’ve grown and gone through experiences.

I decided to be in the business when I was already doing the business. My ex-husband and I had decided to buy a small showroom and grow it. I had been buying from some of these showrooms—I had designed a lot of my own houses and apartments during the years I was married—so I understood a lot of problems with those businesses. They were crowded, seldom had a clear point of view, and it was hard to get good customer service.

Necessity is the mother of invention. [My career originally] began as an escape plan. It was 1983, I had to get away from a marriage that wasn’t working, I had three young sons, and I needed a job. In the beginning, I was probably just waiting until I found the next tall, dark, handsome guy. Instead, I fell into the business. That year, I bought a small showroom business in the Merchandise Mart in Chicago. The next year, I changed the business name to my own and began representing designer collections—and expanding.

I grew up knowing that whatever I was going to be, I wanted to be the best at it. Not academically, necessarily, but I wanted to be respected by others. I had great parents who said, “You can be successful at whatever you want, as long as you work really hard at it.” I think that’s true in most cases.

I came to realize that I’d rather make furniture than represent other people’s—or, rather, I’d do both. I met Christian Liaigre and decided he was a better designer than I was, which worked really well. Then, once we had a furniture line together, I needed a fabric line. I was naming the linens one day—I’d call [one of the products] Great Plains. It evolved into the name of our own textile line. At exactly the same time, [my ex] decided he wouldn’t be paying any more support. I had to borrow money for the first time in my life. I paid it back within the year and never borrowed money again. That was a big inflection point.

What makes the biggest difference is how a person handles the tough times. That’s where you learn—about yourself and about your team.

When you’re building a business, you need to hire the best people you can. It is not unlike building a baseball or basketball team. Michael Jordan couldn’t have ever won without his team; Phil Jackson held him together. I wouldn’t be where I am without the people I have been able to bring on my team. It’s teamwork—the team is what makes it work, it can’t just be you. Sometimes you hire and the business outgrows the people, and so you move on, but the fun part is growing a business with other people.

The biggest challenge came in 2008, when I had to make a new collection very fast. Financially, the world was falling apart, and Christian told me he was going to sell the company to a private equity [firm]. I opened a prototype shop with people who had worked for production companies, and who at the time didn’t have a job, so that we could make prototypes fast and rough. When you make furniture, [the result] doesn’t come from drawing, it comes from sculpting. You have to see it and sit in it. We did a lot of that, fast, with a whole team working night and day. We made 60 to 80 prototypes, of which 50 pieces wound up on showroom floors. And they sold.

The new line worked out really well—so well that, in 2014, I sold the company to Knoll.

My biggest challenge today is taking my entrepreneurial spirit and adapting it to a public company that looks at quarterly earnings. In general, it’s very hard to go from an entrepreneurial company to a more bureaucratic company—and one where you have a lot of bosses.

As the founder, I get to be the boss—it’s my company! I’m also the coach. I’m the director. I’m the leader. A leader’s job is to get the people who are following them to be the best they can be and to help employees grow; a manager’s job is to control the details. Some people have the DNA for leadership, others for management. Everyone has a different job, but they’re all equal.

This article originally appeared in Fall 2018 issue of Business of Home. Subscribe or become a BOH Insider for more.
Keep up with BOH
Our quarterly magazine features in-depth analysis of the topics that matter most to the interior design community.
Subscribe » Order Past Issues