Why you need to hire a technologist for your next project

industry insider | Jul 8, 2019 |
Why you need to hire a technologist for your next project

When most people think “smart home,” they think of a space with a bunch of gadgets placed throughout the rooms: There’s a home theater, a doorbell camera, maybe a digital thermostat you can control from your phone. They’re often not thinking about window treatments that adjust with the sun, doors that open with your voice, a television that disappears behind a painting.

“The technology that you can have in your home is growing exponentially,” says Giles Sutton, vice president of industry engagement at CEDIA (Custom Electronic Design & Installation Association), a trade organization that represents the home technology industry. “And homeowners are really driving the demand for this technology.”

The numbers speak for themselves: CEDIA’s research found that consumers spent $19.56 billion in the residential technology market in 2018, up from $12.3 billion six years prior, and that 45 percent of renovators are adding smart technology to their homes. By 2021, it’s estimated that 55 percent of all U.S. households, or some 73 million units, will be smart homes. And by the end of next year, Americans will have a whopping 12 billion smart devices in their homes.

For designers and architects, that’s a lot of tech to be incorporated into a project. It’s no longer enough to call in an electrician and make an appointment with the cable company to satisfy a homeowner’s technological desires.

Enter the technologist. Also known as a technology integrator, these professionals—many of whom are CEDIA members—are responsible for the design and installation of a home’s technology systems. You’ve got the basics—internet, lighting, heating and cooling, television and sound systems—as well as more specialized features, like full-blown home theaters, security systems, landscape irrigation, even aquariums and pet controls. 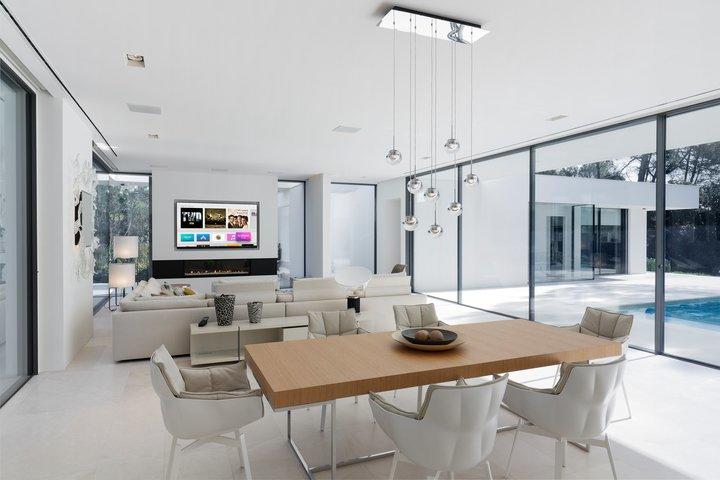 Wiring is the central nervous system of a home, bringing power and life to every room of the house. This is why it’s crucial to bring in a technologist at the start of a project. Danielle Karr, the architect and designer program manager at Control4, a home automation company, recommends that design professionals have a relationship with technology integrators now, even if they don’t have a project.

A technologist’s process is similar to any designer’s: They begin by sitting down with the client to learn about their wants, needs and budget. Are they movie lovers? Do they value security? Are they traveling a lot? Do they work from home?

Based on those lifestyle requirements, the integrator will put together a budget and map out the home’s wiring and placement of equipment—from light switches and control panels to televisions and speakers—throughout the house, which they’ll share with the architect. This ensures that, during the design and construction, wiring is properly run in the right places so a homeowner can have that TV in the kitchen or speakers in the dining room ceiling.

“Getting them in as early as possible makes the experience holistic in the home, not an afterthought,” says Karr. “Homeowners are pushing the trade to look for solutions. Smart home professionals have training to be able to facilitate technology in a home, not just place it in a home.”

This goes for new builds and renovations. For the latter, the earlier a technologist is consulted, the better, as they can help minimize construction. “Maybe only certain walls need to be opened up, rather than tearing everything apart,” says Karr, “or they can solve things with wireless solutions.”

But the biggest selling point for architects and designers when it comes to technologists is that they can make the end result look better. Every designer loathes cables, and the black boxes of speakers and screens. An integrator can make them invisible and create simpler solutions for the homeowner.

Rather than controlling the heating, cooling, lighting, sound and security through separate systems, an integrator can create one solution. “To have them all independent of one another means not just that it is more complicated to operate, but you end up with so many controls all over the house that it ruins the clean look,” says Sutton. “If you bring it all into one control, you can have the minimum amount of devices in each space.”

If these conversations don’t happen at the start of a project, you can guarantee that they’re going to happen at the worst time, which is right at the end.
Giles Sutton

Take lighting design for example. It’s crucial to any interior project, and most homes have various types and fixtures in every room. “You’d have switches and dimmers all over the place [without an integrated system],” says Sutton. “If you bring in voice control, you don’t even need to have a touchscreen on the wall.”

And these Jetson-esque features aren’t just for high-end homes. “The perception in the public is that a lot of this has been for the rich and famous, that this is the kind of ‘clap your hands and the fireplace comes on’ kind of scenario,” says Sutton. “But it is not that. It’s not MTV Cribs, it’s not super flashy. The majority of our members’ clients are families, not James Bond living in a multimillion-dollar penthouse apartment.”

“There’s a solution for most budgets,” adds Sutton, noting that, on average, around $5,000 to $10,000 can be added to the total cost of a project in order to make a home “smart.” According to Karr, a single room, which is the entry point for many clients doing renovations, can start around $1,000 for lighting and TV.

But if you’re working with a smaller budget, there are two fundamental systems that should be thoughtfully considered: a reliable home network and lighting. They seem basic, but both require the home to be wired in a specific way. “They’re very hard to add later,” says Sutton.

“The network is the foundation of any home automation system,” he says. So even if a homeowner doesn’t have the budget at the start to deck out the house with tech, running a structured cable network will future-ready the home so it can easily be added later. Otherwise you’ll find yourself channeling through walls—or wishing you could—at a later date.

At the end of the day, consulting a home integrator at the start can help ensure that you have happy clients—those who, after they move in, won’t be asking why they can’t move the television or wondering why you didn’t suggest lights that could be controlled after they’ve left the house.

“If these conversations don’t happen at the start of a project,” warns Sutton, “you can guarantee that they’re going to happen at the worst time, which is right at the end.”

Homepage photo: Carmel, Indiana–based firm The Premier Group was a recipient of the 2018 CEDIA Award for best integrated home; courtesy of CEDIA