Why a brand might pay for your next design vacation

weekly feature | Mar 24, 2021 |
Why a brand might pay for your next design vacation
By Haley Chouinard

After the school years, field trips tend to fall out of the average adult’s life. That is, unless you’re an interior designer. A number of brands in the home industry offer designers experiential and educational (and often lavish) trips. While it’s nothing new for a brand to invite designers to factory tours or experience centers to get a feel for its product in situ, flying clients overseas for a week of extravagant adventures requires a different level of planning and investment.

Kravet, for one, has taken some of its top clients on trips to Paris and Italy that include private tours of European fabric mills and lectures with industry leaders. Decorative hardware brand Modern Matter had planned to sponsor a voyage to Jaipur, India, in 2020, intending to take a handful of designers to the world’s gemstone capital to see where the precious stones they use in their products originate. (It was postponed for obvious reasons.) Artistic Tile, which in the past has hosted trips to Mexico and to quarries in Vermont, also had an international excursion planned last year: a visit to Italy, complete with stops at centuries-old quarries—and the occasional vineyard.

What it takes to net an invite on one of these tours can vary widely depending on the host. For some brands, a trip is a way to cement bonds with its biggest clients or a region’s top accounts. For others, it’s an opportunity to forge new relationships—and get a little publicity in the process. A robust social following (and the possibility of your posting about the experience and tagging the brand) might make you a prime candidate for one company, while longtime loyalty might be the ticket for another.

It’s easy to understand why designers would be keen to go on these expeditions. Megan Gorelick, a designer based in Delaware who has attended two trips hosted by Kravet, says that the inspiration she got from those experiences was enough to justify the time away from the studio, to say nothing of what she learned or the friendships she made with the other designers in attendance. And the opportunity to travel to a place you otherwise may never have gone is understandably a draw. That’s part of what compelled Los Angeles–based designer Kelly Schandel to join a tour to Denmark in 2019 hosted by Danish kitchen and bath company Vola and its U.S. distributor, Hastings Tile & Bath. “I’d never been to Copenhagen, let alone the other cities in Denmark we visited,” she says. “The destination of a brand trip is definitely part of the appeal.” But how do these expensive voyages benefit the brands shelling out thousands of dollars to whisk designers away for a few days?

“It is so much more memorable to learn on-site than in a showroom with a salesperson,” says Schandel. “It helps build a deeper relationship with the brand, and honestly, we’re more inclined to work with people we know and like.”

It’s that thinking that often informs a company’s decision to spend the money. Lauren Cherkas, president of retail at Artistic Tile, says that a few years ago, the company decided to scrap an ad buy at a national magazine and instead use the money to pay for eight designers and a magazine editor to spend a week in Mexico. “It wasn’t even educational,” she adds. “It was a no-strings-attached invitation to come to a resort with us for a vacation. We brought some of our sales reps who had worked with these designers for years, but sitting around a pool with a margarita in hand is a totally different experience. We cherish the opportunity to find out who our clients really are and to get to know them.” 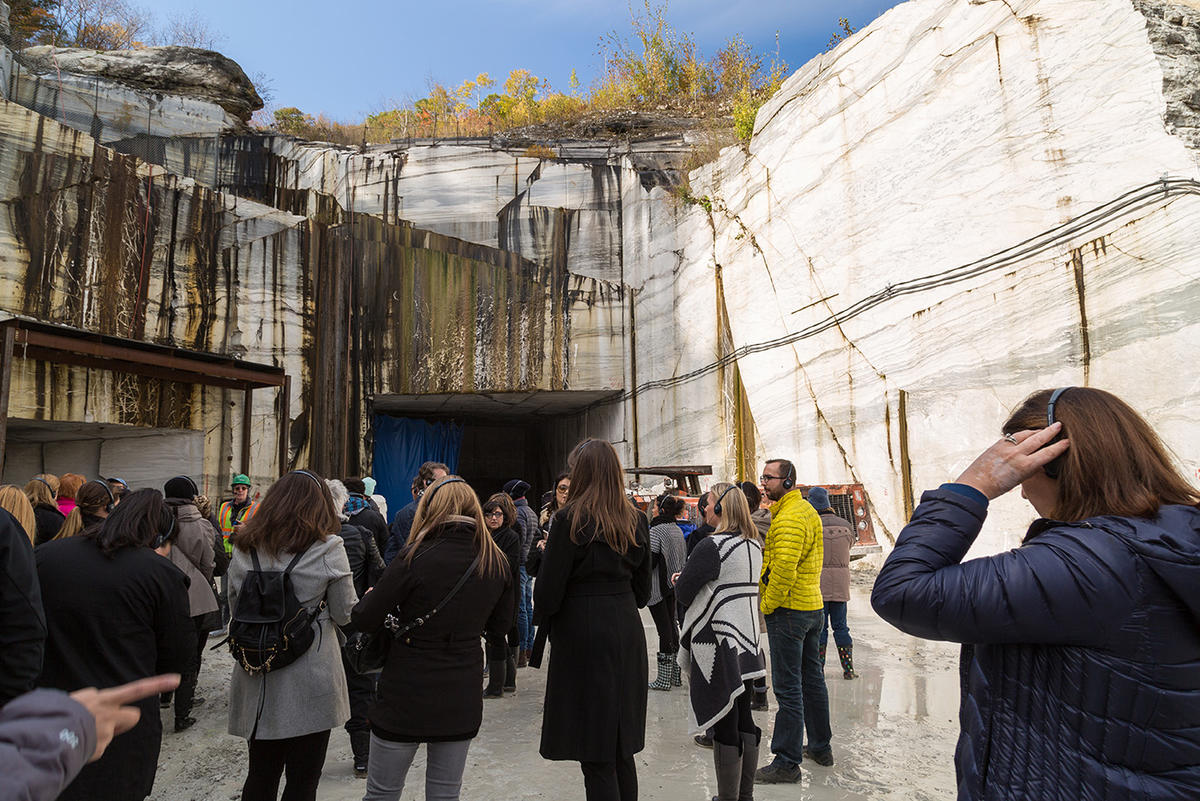 Artistic Tile took designers to Vermont, where they visited a quarry and were able to select slabs from inside the mountain.Courtesy of Artistic Tile

Cherkas says that the bonds formed during these trips are worth the cost. “At the end of that week, we’re family,” she says. “Then, when things go wrong with a future order, that designer might be more understanding. When you feel like someone is a friend, the problem is a lot easier to solve.” She says that Artistic Tile’s Italian excursion will hopefully be rescheduled for early 2022.

While fostering brand loyalty is a central motivation behind sponsored trips, there’s also the allure of creating a more educated clientele. “As we were building our trade program, we saw that designers love getting to know more about the craftsmanship behind our pieces,” says Modern Matter CEO Rishap Malhotra. He hopes that his company will reschedule the India visit for 2022; Modern Matter is also mulling a trip to Kyoto, Japan, where designers can learn about brassmongering. “There’s a specific pull to get closer to the product nowadays, and it can be hard to tell the full story of artisanal products without seeing it in person,” says Malhotra.

Theoretically, a designer who has traveled to the factory where a product is made, or has talked to the artisans who craft it, can do a better job of convincing clients to buy that piece. While Schandel says that she was already using Vola in her work, traveling to Denmark and touring the factory where the fixtures are made has changed how she speaks about the brand. “Being able to say, ‘I’ve been to the factory and I’ve seen the craftsmen creating these,’ it adds a depth and a layer of knowledge that helps sell a piece to a client,” she says.

Chris Goddard, principal of the Springdale, Arkansas–based Goddard Design Group, went to Paris with Kravet in January 2020 and says that getting to see the mills where some of the brand’s fabric is sourced helps not only to tell a richer story to a client, but to differentiate the materials in his own mind, as well. “As designers, we all see a zillion swatches and samples every day,” he says. “Really knowing where something is coming from and seeing a product from its inception to the final result, that’s an experience that makes me a better, more capable designer.”