A new line of Eames-designed housewares debuted at Crate & Barrel this week, the brainchild of Lucia Eames, a little-known creative mind in the famous family. Stay in the know with our weekly roundup of headlines, launches, events, recommended reading and more.

California-based furniture manufacturer Marge Carson, which announced earlier this month that it was going out of business, has now been acquired by Chicago-based interior design firm and retailer Linly Designs, Furniture Today reports. For 75 years, Marge Carson sold high-end upholstery, bedroom and living room furniture through retailers, design center showrooms and interior designers, and counted on Linly Designs as one of its largest accounts in the Midwest for more than a decade.

Honeycomb-shaped homes, a building that resembles a cereal box and a property made entirely of tires are all a part of a series of audacious design projects that may become a reality later this year, thanks to Airbnb’s announcement of the recipients of its $10 million OMG! Fund. As Fast Company reports, the contest, which was initially launched in June, received tens of thousands of submissions and were narrowed down to 100 new projects that each received a $100,000 grant. Per the competition’s funding agreement, projects must be completed by August 2023, after which they will become active listings on the rental platform.

Europe’s ongoing energy crisis has driven natural gas prices to record highs, impacting manufacturing centers across the 27 member countries. That includes Venice, Italy, the home of Murano glass craftsmanship, where production has largely ground to a halt. As Artnet reports, the glass furnaces used in the Murano makers’ processes require large quantities of natural gas to function at high temperatures, which must continue operating 24 hours a day. Since the Russian invasion of Ukraine has put a strain on the flow of natural resources across the continent, the price of that gas has fluctuated throughout the year, settling at $56 per cubic foot this month—up from a more standard rate of $7 per cubic foot in November 2021. The volatility has forced about 80 percent of makers to stop production, while the rest work with reduced power and fewer employees. The Italian government stepped in twice earlier this year to provide emergency aid to the Murano industry, prompting many producers to await another round of relief before resuming operations.

When The Wing announced it was closing its doors late this past summer, the co-working space shuttered its remaining locations—though according to a new lawsuit, it may have left behind some unfinished business at its former flagship in SoHo. As Curbed reports, the landlords of The Wing’s former site at 52 Mercer Street filed a lawsuit against the company and founder Audrey Gelman last week over $1.7 million in back rent. The suit alleges that landlords Matthew and Howard Baden only found out the company was shutting down after the news broke in the media, and that Gelman had guaranteed rent would be paid through 2028. For design enthusiasts, the litigation potentially marks the last gasps of a space (carefully crafted by architect Alda Ly and designer Chiara de Rege) that many millennials aspired to replicate in their own homes.

Benjamin Moore announced Raspberry Blush as its 2023 Color of the Year. The saturated red-orange hue marks a warm departure from the cool-toned colors that have dominated the paint brand’s annual selection in recent years.

Actress Diane Keaton partnered with Fabricut’s S. Harris division for a fabric lineup consisting of more than 50 different styles. Elements by Diane Keaton includes cottons, linens, boucles and wools available in black-and-white hues, as well as dusty taupes and vivid blues. Film lovers will appreciate that some styles borrow their names (like La-Di-Da, Shoot the Moon and Ghost Herringbone) from Keaton’s movies.

The Wells Companies—a Texas-based family of design brands that includes Wells Textiles, Wells Abbott Showrooms and Wells Warehouse—launched Cottage Textiles, a new direct-to-consumer website that will offer interior fabrics and wallcoverings to the general public. Sourced from a variety of brands, the site will feature products that are retired from production or no longer distributed through the trade, available at reduced prices to design enthusiasts of all kinds.

Holiday House NYC announced the return of its annual New York–based designer showhouse, which will be held for the first time since before the pandemic. Hosted at The Kent’s penthouse apartments on the Upper East Side, the event will see more than 15 design firms—including Katie Brandt Interiors, Eneia White Interiors and Champalimaud Design—transform spaces. Open to the public from November 9 through December 11, proceeds from the event will benefit the Breast Cancer Research Foundation.

In recent years, gray color palettes have broken out of the realm of corporate decor and gone on to dominate residential interior design—as seen in new-build real estate listings, influencer bedrooms, home renovation blogs, on the pages of shelter magazines and in the homes of the uber-wealthy on shows like Succession, Billions and Industry. For the Dirt newsletter, design writer Hayley Jean Clark argues that despite the color scheme’s newfound ubiquity, today’s application of gray is a lazy, artless excuse for modern luxury. “The bargain is that if everything is washed out in variations of gray, the chance of committing some grave aesthetic error is diminished,” writes Clark. “But that also requires the laundering out of anything legitimately lively, artful or inviting.”

While some local zoning codes prohibit extensive renovations to increase home sizes, designers and developers are turning toward a clever work-around: building out lavish spaces belowground. As E.B. Solomont writes for The Wall Street Journal, the rise of the “McBasement” has led to subterranean bars, guest suites, bowling alleys, climbing walls and whiskey-tasting rooms.

Waterford, the more than 200-year-old luxury crystal brand, has officially set its sights on Gen Z. Through a new pop-up store in New York’s SoHo neighborhood, a revived social media presence and marketing campaigns depicting its products being used by all ages, the brand aims to capitalize on the recent surge in home goods shopping to break out of its once-stodgy image. As Jade Yan writes for Ad Age, the move makes the Irish heritage brand the latest luxury company (along with fellow crystal giants Swarovski and Baccarat) to move toward modernizing its image to reach the youngest generation of consumers.

The Black Artists + Designers Guild will celebrate the impact of community members building equitable and inclusive spaces at the inaugural BADG of Honor event—an awards ceremony and fundraiser held on October 26 in partnership with Interior Design magazine. Recognizing those whose work aligns with the organization’s mission to honor their ancestral legacies in art and design, the program has named four award winners: Mashonda Tifrere, founder of ArtLeadHer, as the recipient of the Collective Circle Award; Dori Tunstall, dean of design at Toronto’s OCAD University, as the recipient of the Education Award; Walter Hood, creative director and founder of Hood Design Studio, as the recipient of the Founder Award; and Franklin Sirmans, director of the Perez Art Museum Miami, as the recipient of the Legacy Award.

Also at the BADG of Honor event, the organization will honor one recipient of the Maker Award, for which community members have submitted five nominees for consideration: Kesha Franklin, Breegan Jane, Karen Revis, Cheryl R. Riley and Jomo Tariku. To vote on a finalist before midnight on October 21, click here. 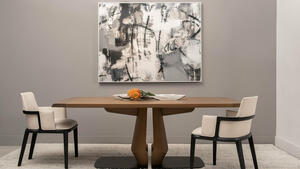