Mere days after pulling a Magnolia Network original show, Home Work, from its lineup after allegations of shoddy work by the stars went viral, the channel, founded by Chip and Joanna Gaines, has reversed course, reinstating the program and vowing to better support its talent in the future.

“Magnolia Network is dedicated to sharing hopeful and genuine stories,” Magnolia Network president Allison Page said in a statement on Friday. “In doing that, we strive to meet people with compassion, and to cautiously approach difficult moments with honest understanding. After speaking with homeowners as well as Candis and Andy Meredith regarding renovation projects for Home Work, and hearing a mix of both positive and negative experiences, we do not believe there was ill or malicious intent. Our commitment now is to provide appropriate resolutions for those whose experience with Home Work fell short of our network’s standards. While Home Work will return to Magnolia Network, we recognize the responsibility we have to act on how we can better support not only our talent, but those who put their trust in them and this brand.”

The show was pulled on January 7, just two days after Magnolia Network launched, bringing a slate of Gaines-approved shows to what was formerly known as the DIY Network in partnership with Discovery. Several homeowners who had either appeared or been approached to appear on Home Work took to Instagram last week to document their experiences with the Merediths. The three separate accounts detailed poor workmanship, blown budgets and overpromised deadlines. The network is now saying it will work with the disgruntled homeowners to resolve the issues.

The Merediths have posted eight written and filmed responses to the allegations on their Instagram account since January 7, writing in the first of the eight posts that they “adamantly deny that we have ‘scammed,’ stolen or lied to any of these clients.”

Home Work, which follows the couple as they renovate a 20,000-square-foot schoolhouse into a home for their blended family of nine and tackle room makeovers for clients, will return to both the Magnolia Network’s Saturday lineup and the streaming platform Discovery+.

Correction: January 18, 2022
An earlier version of this story misstated that Home Work had been canceled by Magnolia Network. The show had been pulled from the network’s lineup pending review. 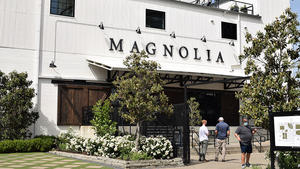 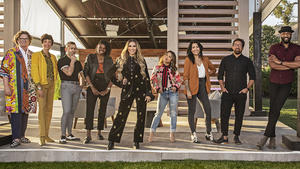