MADWorkshop and USC team up on homelessness intiative

Collaborations | Mar 2, 2017 |
MADWorkshop and USC team up on homelessness intiative

MADWORKSHOP (Martin Architecture and Design Workshop) partnered with the University of Southern California School of Architecture last September on the Homeless Studio, an initiative with the goal of developing design solutions to meet Los Angeles’s homelessness crisis. Homelessness in the city has increased by over 5 percent since 2015—nearly 47,000 people are without homes. Nationwide, more than half a million people are homeless. 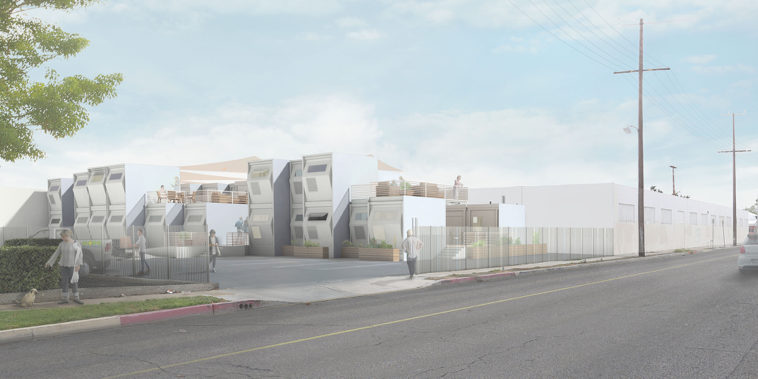 Rendering of Homes for Hope

The Homeless Studio was founded by MADWorkshop co-founder Mary Klaus Martin in 2015 and designed to embody design with a social conscience. USC faculty R. Scott Mitchell and Sofia Borges (the director of MADWorkshop) developed coursework dedicated to three different designs, on temporary, modular and expandable solutions, in addition to transitional housing. The three elements included: Nomadic Homes, which created full-scale, livable and collapsible movable shelters; Tiny Homes, a one-week workshop that asked students to use found materials, such as a shopping cart, to create shelters; and Homes for Hope, a 30-bed shelter for women of the Hope of the Valley Rescue Mission.

“The Homeless Studio set out to investigate solutions to an important and pressing issue in our cities,” says Borges. “As designers, we have the power to make a difference, and the students realized that through the course of the semester. Being able to design and build at full scale and have actual people living in the spaces that they created made a big impact on them.”

A publication to be released by USC School of Architecture at the end of the year will chronicle the work of the program.