Originally designed by Danish-American furniture designer JENS RISOM in 1943 as his first-ever chair and table collection, the new iteration of the storied designs has been re-engineered for the outdoors. That first collection drew on cost-effective wartime materials while today’s update from KNOLL is crafted from weather-resistant teak wood and Sunbrella fabric. 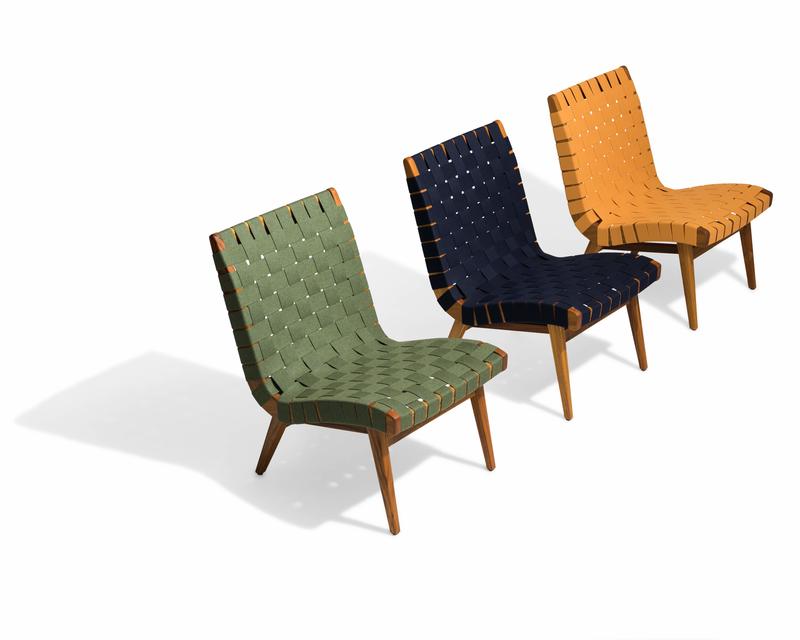 Side Chairs in Fern, Navy and Ochre, from the Jens Risom Outdoor Collection for Knoll; courtesy Knoll Inc.

“The Risom combination of teak and Sunbrella complements any outdoor space, without compromising the simplicity and organic vocabulary of the original designs,” explains Knoll Inc., which includes the brands Knoll Office, KnollStudio, KnollTextiles, KnollExtra, Spinneybeck | FilzFelt, Edelman Leather, Holly Hunt, DatesWeiser, and Muuto (which it recently acquired). “One of the first to import Scandinavian design principles to the U.S., Jens Risom was part of a new vanguard that helped establish postwar America’s leadership role in modern furniture design and manufacturing. The Risom Outdoor Collection captures that very spirit.”

Risom is credited as being one of the early pioneers of Scandinavian design in the U.S. After arriving to the States 1939, he and Hans Knoll began collaborating on a new furniture brand. Among his work during wartime was the Risom Lounge Chair, which was produced from repurposed military parachute straps. Risom went on to design for his own firm, Jens Risom Designs, starting in 1946. He died in 2016 at age 100.

The Risom Outdoor Collection includes a lounge chair sans arms, a side chair, an ottoman, and square and round side tables. The webbing on the side and lounge chairs is made with Sunbrella fabric that’s available in six colors: Charcoal, Navy, Ochre, Carbon, Antique Beige and Fern.

The line is part of Knoll’s heritage of design collabs, among them, Richard Schultz 1966 Collection and the Eero Saarinen Outdoor Collection, as well as modern outdoor designs by David Adjaye, Jonathan Olivares and Daniel Stromborg.