Murray Moss on the ephemeral nature of objects

Following his first lecture at the Rhode Island School of Design, Murray Moss was approached by a man modeling a beige suit jacket embellished with 75 neck ties that he had hot-glued himself. He spun around for the design icon, awaiting his reaction. “Well tailored,” said Moss warmly, studying it without getting up from his chair. 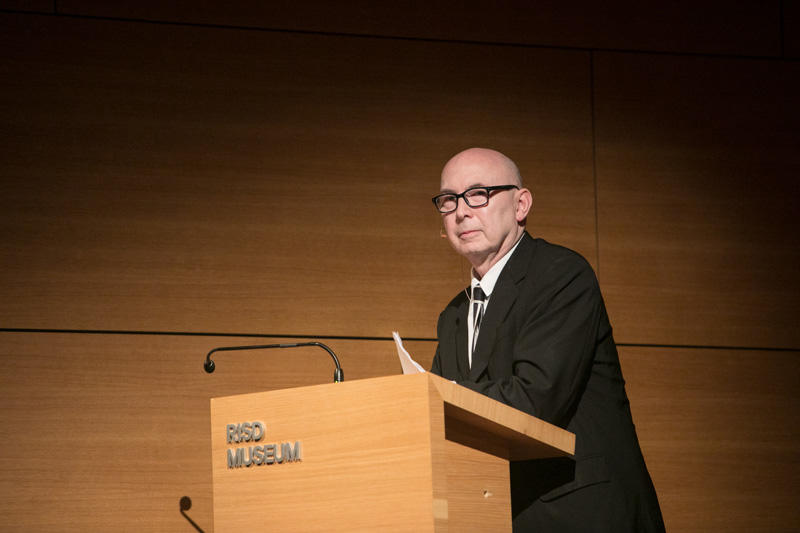 For his lecture, Moss, who will spearhead an off-campus program for RISD this spring at his home in Hamden, Connecticut, had planned on speaking about the narrative embedded in certain objects, whether they be functional, decorative or art. But, about two hours before Wednesday’s lecture, he revealed that the concept was nonsense: 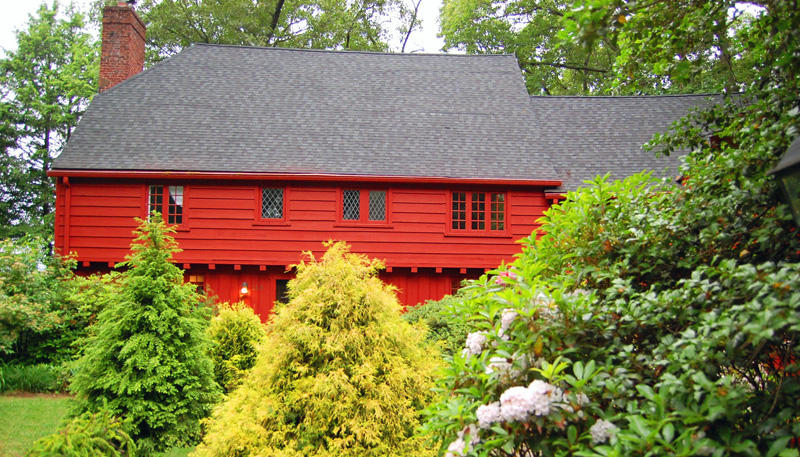 “I made it up—I needed a press line,” Moss told Business of Home. “Objects don’t tell stories. An object is a dead thing. What is it gonna know? It doesn’t know anything, it’s inanimate, it’s dead. So I made that up. What tells stories is us, projecting it onto that object. We tell the stories because we can’t help it. We’re wired that way. We experience things as stories.”

He ran a famous SoHo-based gallery and store, Moss, for 18 years. With his business/life partner Franklin Getchell, he ignited the careers of Marcel Wanders, Maarten Baas, Hella Jongerius and others. When the store closed in 2012, the pair moved into consulting, working with the Museum of Fine Arts in Houston and the Jewish Museum in New York to renovate their retail storefronts. And this past April, they co-wrote a memoir, Please Do Not Touch (and Other Things You Could Not Do at the Design Store That Changed Design), which is garnering attention nationwide.

Objects don’t tell stories. An object is a dead thing. What is it gonna know? It doesn’t know anything, it’s inanimate. What tells stories is us, projecting it onto that object. We tell the stories because we can’t help it. We’re wired that way. We experience things as stories.

People pay attention to Moss. At least, those who were around during the store’s tenure. However, for a new generation of design students, it was the first time they’d heard of him.

Shortly before the lecture began, sitting in a hotel lobby, Moss confessed he was “terrified.” “I’m calling it, in my own scenario, a lecture in one act,” said Moss. “I have to read it—I couldn’t memorize it—but I will perform it as best I can.”

At age 68, Moss is “sort of” retired. But he hates relaxing. Being “kind of” famous is a driver—and it’s addictive. “It’s very basic,” said Moss, “but I don’t think there’s anything wrong with that.”

Out of the five or so careers Moss has had thus far, acting was the first—he even referred to the store as his proscenium. Employees would work under an assumed name. The objects for sale would be on display in glass cases that were suspended from the ceiling. The temperature was set low. Moss was not afraid to manipulate the experience of the passive consumer if it meant capturing their attention. “If they’re not listening, you’re dead,” Moss explained. “I’ll go for titillation. I’ll go for anything that is a heartbeat.” 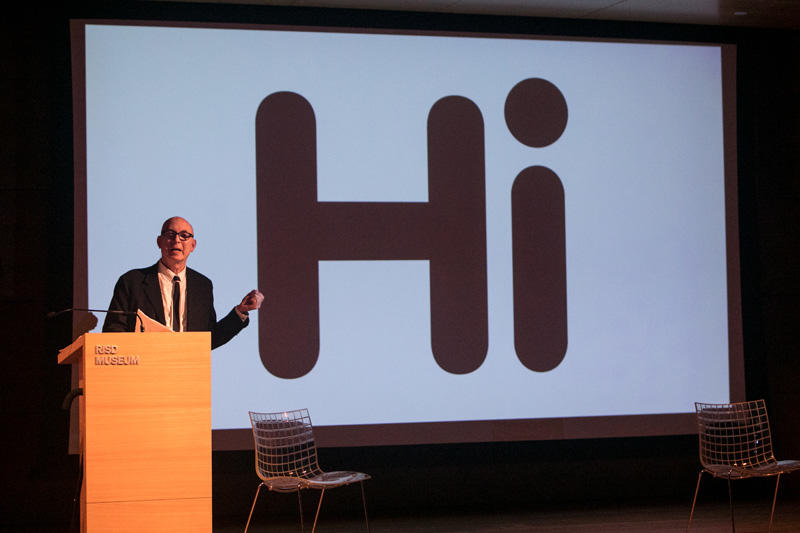 To begin his lecture, Murray Moss turned the projection screen to this slide, and waved.Jo Sittenfeld, courtesy of Rhode Island School of Design

When Moss began his RISD lecture, he stood at the podium, stared at the crowd, and clicked a small remote. “Hi,” read the projection screen behind him. He waved. “In 2006, my partner Franklin Getchell and I decided to open a gallery in Los Angeles,” Moss told the audience. “Things were going pretty well in the New York store, so we thought we’d take the act to the place where streets are paved with gold.” Moss hoped their friends would spread the word about the store. Instead, they warned him it would fail—industrial moodiness was fine for New York, but not light and sunny enough for Los Angeles. Moss and Getchell had spent their budget at that point, so Getchell gave Moss $50 to change the aesthetic of the store. They bought lettering that read, “Hi,” the same “Hi” on the projection screen, that passersby could see from the street.

“No one, in three years, ever, ever commented on that,” said Moss, rousing some laughter from the audience. “They never said, ‘Hi.’ We closed that store in three years, and we sold, in those three years, basically nothing.”

The lesson learned, ultimately, was that designers do not always get to choose the meaning of an object; instead, people assign their own meaning to things. Recently, when Moss was promoting his memoir in New Haven, a woman pulled an asparagus server out of her purse, sharing that she bought it from him 15 years ago and still loves it. (“Am I misinterpreting this, or did you bring that to try to return it?” he asked her.)

The man with the tie-jacket remained to chat for several minutes after Moss’s finale, and he was not the only one in line.

Souvenirs are perhaps the most literal repository of narrative, as they are meant to be keepsakes of experiences one wishes to preserve, to protect against time, so that one can summon them at will, most often disguised as banal knickknacks, refrigerator magnets, mugs. Souvenirs are the pressed rose, a lock of hair of yesteryear.

“We make strong links,” said Moss, “which are capable of turning every object into a dagger or a salve, a treasure or trash.... Souvenirs are perhaps the most literal repository of narrative, as they are meant to be keepsakes of experiences one wishes to preserve, to protect against time, so that one can summon them at will, most often disguised as banal knickknacks, refrigerator magnets, mugs. Souvenirs are the pressed rose, a lock of hair of yesteryear.”

His favorite souvenir was one that he could eat: a dark chocolate rendition of Rembrandt’s “The Night Watch,” which he consumed after seeing the painting in person for the first time. “They helped me to retain that moment,” said Moss. “It was brilliant. The souvenir of the enormous painting was a bridge which connected me, Murray, to a great masterpiece. Stories originate in us.”

The energetic crowd filled roughly a third of the auditorium and seemed to be split almost evenly between faculty and students. As Moss transitioned between slides (some of which had pictures, others had brief, biting statements), he’d toss papers on the ground, David Letterman style. It was an intentional, practiced, precise performance.

After the final slide was seen and the final word was heard, Moss did not bow. Instead, he tossed his last few pages down, walked off stage and took a seat in the front row of the house. It was his final surprise of the evening—before the crew could react, the woman who’d introduced him was standing in the dark, thanking the audience for coming. There would be no post-lecture Q&A.

Design lovers, students, aficionados, artists, fans of Moss and those new to Moss can catch his second public lecture, “Interdisciplinary Design Becomes the Norm,” at RISD in mid-November.