Here’s why these former Homepolish designers are banding together

digital disruptors | Dec 4, 2019 |
Here’s why these former Homepolish designers are banding together

Written in stark black text on a white background, the phrase began popping up on Instagram in late September, a few weeks after the collapse of the online interior design platform. Following a dramatic conference call in which founder and CEO Noa Santos announced that his company was broke, designers began sharing testimonials about their experience with the site—and what its demise had cost them.

“Homepolish has walked away with more than [$12,000] in retained client fees for my design time.”

“We lost a cool remodeling project because Homepolish staff disappeared and no one replied to the potential client’s emails, which in turn made her not trust us.”

“Homepolish walked away with over [$3,000] of retained client fees for my design time.”

Claire Hung, a New York–based interior designer who had worked with the platform since 2017, was one of many to post the image on Instagram. Homepolish’s collapse, she says, had thrown her business into disarray, leading to difficult conversations with clients, sleepless nights and the loss of $32,000 in project fees.

Throughout the tumultuous period around the platform’s downfall, Hung created an online group to connect with other Homepolishers to commiserate and share information. After the dust had settled and it became clear that there was no way to recover the unpaid fees, the conversation turned to what would come next.

Ahmad AbouZanat, a former Homepolish designer also based in New York, hosted an in-person gathering for local designers in Hung’s group. He recalls the discussion quickly turning from negative to positive: “A lot of designers in the room had the same reaction: ‘You know what? This is bad. But we’re going to get something good from it.’”

Three months after Santos’s announcement, 11 former Homepolish designers are announcing a new venture they’re hoping will be that something good: a not-for-profit organization called Interior Collab. Their goal is to replicate the engine at the heart of Homepolish—an online tool to connect clients to designers—without the venture capital baggage.

“With all these tech startups trying to middleman the interior design industry, they’re really exposing designers to an unnecessary amount of risk,” says Hung, name-checking Laurel & Wolf and WeWork. “While I recognize there is a benefit of making up-and-coming designers more accessible to the masses, I felt like there was a better way of creating a space on the web for clients to find designers. It’s for designers, by designers.”

Their first step has been the launch of a website, featuring portfolios of the founding members’ work. The full roster: AbouZanat, Hung, Alexandra Balic, Venessa Brennan, Gala Magrina, Gianna Marzella, Tana Nesbitt-Hayes, Ana Claudia Schultz, Hope Scully, Francisca Trujillo and Emi Young. Next, the group is planning to launch a Kickstarter campaign to fund the development of a more robust platform—one they hope will serve as a larger, easily searchable directory for clients on the hunt for design work.

In theory, it’s not entirely different from Homepolish, with a few key distinctions. For one, Hung says Interior Collab has no intention of getting involved in projects after the designer-client connection has been made. For another, the site won’t charge clients or dictate fees and billing. The overall philosophy is: Get designers work, and get out of the way.

“We don’t want to get into the business of doing what Homepolish did, and we don’t think it worked,” says Hung. 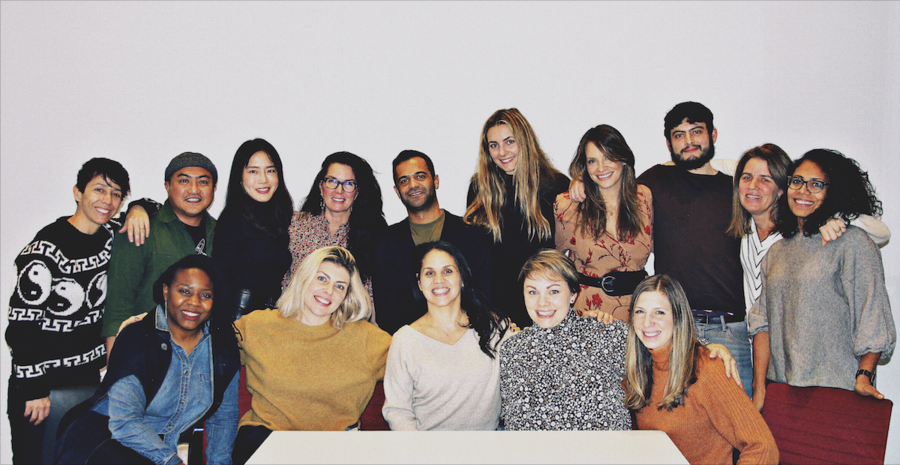 There are challenges ahead. One is to grow the network beyond the initial 11 New York–based designers. Interior Collab plans to take a communal, open-arms approach. Their membership application form does ask for a few qualifying documents, but the goal is to expand the ranks, not exhaustively vet each incoming designer. A $250 annual fee for the listing, Hung says, will go toward the development and maintenance of the website, and growing opportunities for members. (Interior Collab plans to file as a 501(c)(6) nonprofit—a designation that applies to trade groups and industry organizations.)

Another challenge: In the vast wilds of online commerce, attention is expensive. Companies often pay hundreds, if not thousands, of dollars to acquire one customer. Homepolish was no exception. Backed by $20 million in venture funding, Santos’s startup spent heavily to build its brand. Without a hefty marketing budget, Interior Collab faces a tough battle getting the word out.

The founding members are optimistic that press and word-of-mouth will help, but are realistic about short-term goals. “Homepolish definitely invested a lot in marketing and we all know that’s how they got that big pool of clients,” says AbouZanat. “The main goal right now is to build this platform that’s pushing designers in front of potential clients.”

“I’m hopeful that [Interior Collab] will be a source of new business, but that will take some time,” adds Marzella.

Even if their venture can’t match Homepolish’s VC-backed lead-generating muscle in its early incarnation, the Collab-ers are optimistic that the organization can be more than just a referral engine. They’ve discussed pooling resources to create a shared workspace or to develop a collective material library. In whatever form, their hope is to grow a community of designers and leverage it for the common good.

“There’s a lot that could come out of this,” says Marzella. “We could get better discounts—even just having a network of people to refer contractors and trustworthy vendors would be great. So much of what we’ve learned from Homepolish is [the dangers of] relying on a bigger company and someone at the other end of an inbox.”

And if a side effect is a show of defiance to would-be design industry disruptors? That’s intentional.

“We want to send a message,” says Hung.