In 1944, furniture manufacturer Emeco debuted the “150-year chair,” built to last for a century and a half—now, in the age of fast furniture, the next generation of designers are putting their own twist on the concept. Stay in the know with our weekly roundup of headlines, launches, events, recommended reading and more.

Several weeks ago, The Laundress advised customers to stop using its products due to the presence of bacteria that could cause infections—now, about 8 million laundry and cleaning products from the brand have been recalled by the U.S. Consumer Product Safety Commission. The recall applies to laundry detergent, fabric softener, fabric shampoo and conditioners, and other cleaning products produced between January 2021 and September 2022, though it is still unclear how the contamination took place. The commission also said that 11 consumers have reported bacterial infections so far, and The Laundress is currently investigating whether the incidents are linked to its products. Customers can now request a refund for the products, which were sold directly by The Laundress, as well as a variety of major retailers including Saks Fifth Avenue, Target, Nordstrom and Bloomingdale’s.

Investment firms purchased a record number of homes during the pandemic, cornering the market with all-cash offers and often converting properties into rentals—and dashing the hopes of many first-time homeowners. As The Wall Street Journal reports, a growing number of housing groups are now aiming to beat investors to the punch by raising money from government and philanthropic sources to make their own cash offers on properties, which they renovate and sell to first-time buyers. The “activist flippers” contend that rental conversions prevent would-be purchasers from building wealth through homeownership, particularly targeting lower-income demographics.

RHF Investments—the parent company of Century Furniture, Hancock & Moore, Hickory Chair, Jessica Charles, Highland House Furniture, Maitland-Smith and Cabot Wrenn—added to its family of brands last week with the acquisition of the operations and assets of Classic Leather and sister company St. Timothy Chair. The terms of the deal were not disclosed. The Conover, North Carolina–based Classic Leather was founded in 1966, before adding the commercially focused St. Timothy Chair in 1973, Furniture Today reports. The company will complete its existing backlog before its 80-person workforce and operations are transitioned over to RHF’s oversight.

The American Home Furnishings Alliance is seeking a judicial review—and ultimate nullification—of a recently published mandatory product safety rule that aims to prevent furniture tip-overs on children. Set to take effect for manufacturers next May, the new rule, which was drafted by the U.S. Consumer Product Safety Commission (CPSC), imposes test methods for stability such as a calculation of an item’s “tip-over moment” and would require retailers to display a tag on furniture items rating their potential for tip-over from 0 to 5. As Home News Now reports, the petition against the rule was filed by AHFA along with the Mississippi Manufacturers Association and the Mississippi Economic Development Council, who claim that the rule’s complex performance testing methods make it difficult to enforce and could drive up production costs. Instead, AHFA supports the passage of the STURDY (Stop Tip-overs of Unstable, Risky Dressers on Youth) Act, which cleared the Senate in September and awaits a vote in the House.

Sustainable prefabrication startup Plant Prefab completed a $42 million funding round, TechCrunch reports. Founded in 2016, the company creates prefab units designed to promote energy and water savings, while utilizing environmentally friendly products like recycled drywall and insulation. With the new capital and through the use of a new automated manufacturing facility, Plant Prefab aims to build roughly 800 home, apartment and condo units annually—a major jump from the 40 homes the company currently produces each year.

Pantone announced Viva Magenta as its 2023 Color of the Year. In the announcement, Pantone Color Institute executive director Leatrice Eiseman identified the shade as inspired by the red of cochineal—a bright natural dye. “It is a new animated red that revels in pure joy, encouraging experimentation and self-expression without restraint, an electrifying and a boundaryless shade that is manifesting as a standout statement,” wrote Eiseman. 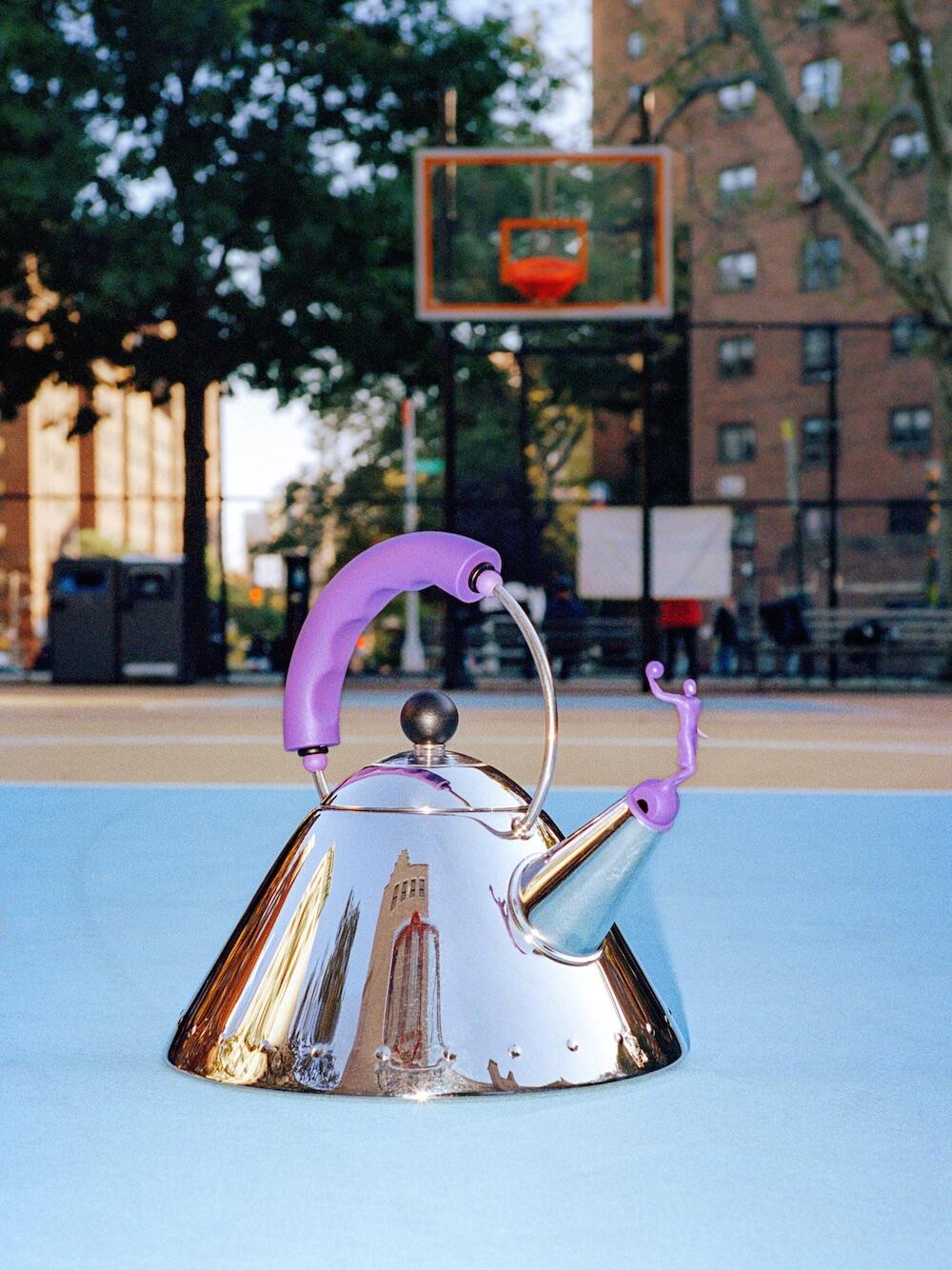 Italian design brand Alessi partnered with the late Virgil Abloh before his passing last year for an update on its iconic 9093 kettle, originally designed in collaboration with American architect Michael Graves. The newly debuted 3909 kettle, developed by the Abloh-founded studio Alaska Alaska and released by Virgil Abloh Securities—a corporation led by Virgil’s wife, Shannon—provides a fresh take on the classic design, swapping out the kettle’s bird whistle for a silhouette of a basketball player caught mid-dunk.

House Beautiful debuted its fifth annual Whole Home project in Atlanta, partnering with Ladisic Fine Homes and architectural firm Pak Heydt & Associates to transform a historic 11,000-square-foot Chastain Park Tudor—marking the first time the event has centered on renovating an existing property instead of a new build. The magazine enlisted 12 renowned designers to join in the effort to create spaces dedicated to living better at home, including Ashley Gilbreath, DuVäl Reynolds, Leanne Ford and more. The project will be open to the public between December 3 and December 17 on select days.

The Kips Bay Decorator Show House announced the location of its sixth annual event in West Palm Beach, Florida, selecting the property at 3240 North Flagler Drive in the city’s Northwood Shores neighborhood. In February, the organization will select a group of designers to reimagine the space before opening to the public.

After 27 years, design editor Wendy Goodman is saying goodbye to her Greenwich Village apartment. For Curbed, she tells stories of the many guests who passed through her place—Richard Avedon spilling red wine on a white couch, Marie Kondo personally reorganizing an overflowing bookshelf—with the help of a visual diary of the singularly styled space alongside photos of its recent undoing.

The holidays bring out the decorator in everyone—but for professional designers, festive occasions call for an elevated twist. For The New York Times, Tim McKeough asks top designers—including Ken Fulk; Stephen Alesch and Robin Standefer of Roman and Williams; and Rayman Boozer, founder of Apartment 48—for a peek inside their holiday-themed homes, complete with details like gumdrop trees made from twigs and sweets, and ornaments made out of vintage epaulets and foraged pheasant feathers.

The International Interior Design Association’s New York Chapter is now accepting submissions for the second edition of the Hazel Siegel Scholarship, honoring students who demonstrate outstanding academic achievement, leadership and commitment to the IIDA NY chapter. Open to New York State undergraduate and graduate interior design students, the scholarship will go to three recipients, who will receive an all-expense-paid three-day trip to the SHIFT Student Conference in Dallas along with student membership to IIDA NY for 2023. To apply by the December 16 deadline, click here.

The LIT Lighting Design Award 2022 winners have been announced, celebrating creativity and innovation in the fields of lighting products and applications. Among this year’s winners, New York lighting design firm L'Observatoire International earned the Lighting Design of the Year title, while Ukraine-based studio Expolight won the Lighting Product Design of the Year award. For the full list of winners, click here.

The American Home Furnishings Alliance honored manufacturer and environmentalist William Gaston “Gat” Caperton IV with the Distinguished Service Award—the organization’s highest honor. Caperton established Gat Creek furniture company in 1996 after purchasing and renaming the declining Tom Seely Furniture and turning it into a thriving enterprise. He went on to become a leader in the industry, serving as a co-founder and board member for the Sustainable Furnishings Council, a board member of the West Virginia Nature Conservancy and as chair of AHFA’s board of directors in 2019.