This week in design, antique hunters have turned their attention to Christie’s Exceptional Sale in Paris, where two pieces of furniture once owned by Marie Antoinette are up for auction. Stay in the know with our weekly roundup of headlines, launches, events, recommended reading and more.

Business News
After United Furniture Industries abruptly shut down last week—laying off its entire 2,700-person workforce nearly overnight—former employees filed class action lawsuits stating that their employer did not give them 60 days’ termination notice, a violation of the federal Worker Adjustment and Retraining Notification, or WARN Act. According to Home News Now, the plaintiffs across three different suits include two separate individuals filing on behalf of all former employees of the company, along with a group of more than 30 former employees who were terminated without notice on the night of November 21—all of whom had their benefits terminated immediately without extensions through COBRA. According to the WARN statute, an employer’s failure to give 60 days’ notice makes it liable for 60 days of pay per worker affected, compensation that the plaintiffs are requesting, along with accrued vacation, civil penalties and attorneys’ fees. Todd Evans, Lane’s former CEO, and company owner David Belford did not respond to HNN’s requests for comment. HNN is also following the impact of United/Lane's closure—an estimated $550 million hole in the marketplace—on the furniture industry at large.

Unilever, the parent company of The Laundress, is facing a class action lawsuit alleging that the high-end cleaning brand misled consumers over the presence of bacteria found in its products, Modern Retail reports. The suit comes a week after the company instructed retailers to immediately halt sales and distribution of its products, and even quarantine their stock. Filed in a Northern California federal court on Thanksgiving day, the lawsuit alleges that The Laundress made “false, misleading and deceptive representations” by marketing its products as safe. The named plaintiff, Margaret Murphy, alleges that members of her household have had respiratory problems and skin infections after using the products. The suit brings eight claims charging violations of consumer protection statutes and warranty laws, and seeks to provide relief on behalf of three classes of customers: a national class; a class for California residents; and a third for residents in 11 different states, including California, Florida, Illinois, Massachusetts, Minnesota, Missouri, New Jersey, New York, Pennsylvania, Oregon and Washington.

When workers abandoned office buildings for work-from-home setups during the pandemic, it paved the way for the empty structures to become prime candidates for adaptive reuse, The New York Times reports. According to a new study by RentCafe, roughly 28,000 new U.S. rental apartments were created out of former commercial buildings between January 2020 and December 2021—more than triple the number of units converted in 2018 and 2019, and 10 times that of 2010 and 2011. The report reinforces the trend of continued remote work driving down demand for office space, with the national vacancy rate reaching a record 19.1 percent in the third quarter of 2022. Accordingly, a high concentration of adaptive-reuse apartments were found in large cities where offices are common, including Washington, Philadelphia and Chicago.

While Amazon was the No. 1 site among shoppers searching online for Black Friday discounts last year, it fell to fourth place this year as Walmart took the top spot, with Target and Kohl’s falling next in line, respectively. As CNBC reports, the news comes from advertising technology company Captify’s annual survey, which also found that Walmart’s searches surged 386 percent year over year. Due to inflation, The National Retail Federation still expects overall holiday spending to grow less than last year, rising just 2.5 percent this season compared to an 8.6 increase a year ago.

Residential geothermal company Dandelion Energy closed a $70 million Series B funding round led by Len X, the corporate venture arm of Miami-based homebuilder Lennar. Founded in 2017, the company replaces residential air conditioning and heating equipment with a heat pump and underground pipes—a system that aims to reduce heating and cooling bills by up to 50 percent while also aiding environmental efforts by cutting homeowners’ carbon dioxide emissions by up to 80 percent. The news of Dandelion’s capital injection comes after a year of growth for the business, which more than tripled its commercial operations in 2022.

The asset management arm of JPMorgan Chase & Co. entered into a deal to acquire more than $1 billion worth of single-family rentals, Bloomberg reports, through the formation of a new joint venture with Los Angeles–based real estate investment firm Haven Realty Capital. Through the project, the partners will buy and develop communities of new homes (a strategy known as “build-to-rent”) starting with three communities in the Atlanta area. In the future, the group plans to spend an additional $415 million in equity—enough to purchase more than 2,500 properties.

The Citizenry partnered with weavers in Afghanistan for a new collection of one-of-a-kind rugs available on the retailer’s site.Courtesy of The Citizenry

Launches & Collaborations
Universal Furniture teamed up with upholstery brand Crypton and Garden & Gun magazine for a limited-edition capsule collection available exclusively through the GDC Home store in Charleston. Curated by Garden & Gun, the 10-item assortment combines pieces from Universal’s furniture line with Crypton fabrics for a range of upholstery and case goods designed to reflect an elevated Southern lifestyle.

The Citizenry partnered with a group of master weavers in Afghanistan for a new collection of one-of-a-kind rugs available on the retailer’s site. Each piece is hand-made from locally sourced wool, colored with natural vegetable and mineral dyes, and created in weavers’ homes over a labor-intensive six-month period—a process made even more challenging in light of the country’s recent regime change, which has forced the artisans to move operations into their own homes.

U.K.-based wallpaper and paint brand Graham & Brown expanded into a new category with the debut of a line of made-to-measure soft furnishings. The product assortment includes more than 200 fabric designs, available in printed, plain and textured styles, as well as in curtains and shades. 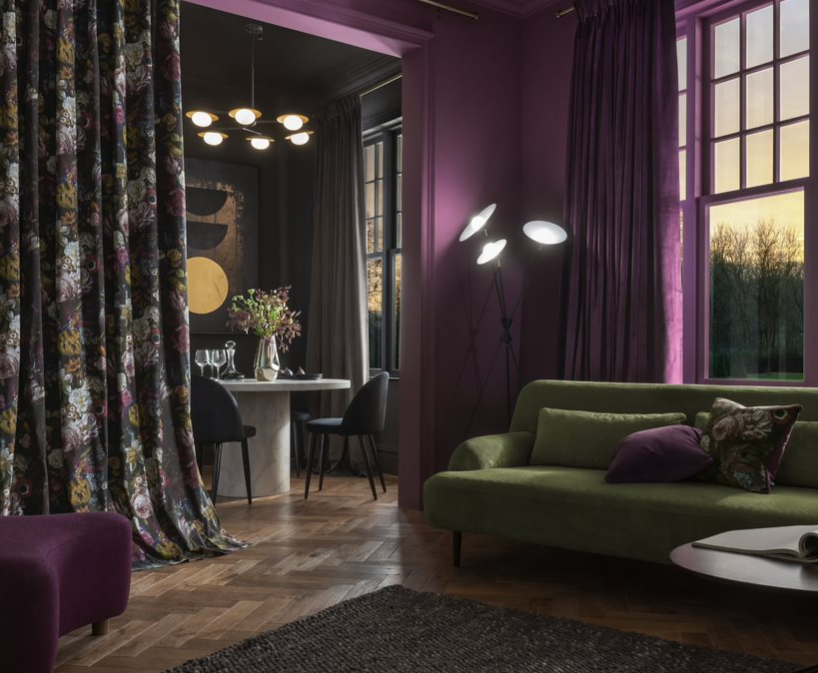 Graham & Brown expanded into a new category with the debut of a line of made-to-measure soft furnishings, including more than 200 fabric designs.Courtesy of Graham & Brown

When one Nevada homeowner listed his 25-acre estate in August 2021, $30 million seemed like a reasonable price for the 18,000-square-foot mansion complete with multiple ponds and outbuildings. Fifteen months later, he is now asking $11.5 million for the property—a nearly 62 percent price reduction. As E.B. Solomont and Katherine Clarke report for The Wall Street Journal, many high-end homeowners have found themselves in a similar situation amid the market’s recent correction, with the luxury real estate market going from a “huge party with champagne and caviar and everyone thinking it was never going to end” to a complex environment for home sellers.

Living above a store was a common arrangement in the first half of the 20th century, and one that fell out of fashion in the following years as residents sought quieter spaces and better work-life balance. As Joanne Kaufman reports for The New York Times, a new generation of New Yorkers are bringing the tradition back—above nightclubs, Off-Broadway venues and Upper East Side restaurants alike.

Call for Entries
Design Within Reach is now accepting entries for its 19th annual Champagne Chair Contest, created in partnership with Champagne Pommery and climate innovation hub Slow Factory. The competition challenges participants to create miniature models of either a chair from DWR’s product portfolio or an original design, using only the foil, label, cap, cage and cork from no more than two champagne bottles. For each valid entry, the MillerKnoll Foundation will donate between $50 and $25,000 to support Slow Factory’s mission of addressing environmental justice and social inequity. To enter before January 6, click here.

Cue the Applause
Architectural Digest released its annual AD100 list, celebrating the top designers and architects of the year. Among this year’s cohort are 11 debut honorees, including Justina Blakeney, Young Huh and Josh Greene. For the full list, click here.

In Memoriam
Renowned trim historian Ed Goodman passed away this month at the age of 84. Goodman’s expertise in the field spanned more than three decades, during which time he oversaw the historic restoration of passementerie in high-profile establishments such as The White House, Metropolitan Opera House, The Breakers, New York City Hall’s Governor’s Room, The Plaza Hotel in New York and the Wrightsman Galleries at The Metropolitan Museum of Art.