Amid the chaos of the day-to-day, it can be hard to know whether business is trending up or down. Only in retrospect can we look back and put an exact date on a calendar: There, that’s when things took a turn for the worse. So it is with the pandemic-inspired home goods bonanza; according to a report by research firm YipitData, it was the week of March 27, 2022, when retail sales took a final brutal dip, signifying the end of the gold rush. That is, for everyone except Amazon.

In analyzing data on home goods GMV (“gross merchandise value,” or simply the volume of purchases), Yipit found that in 2022, most home goods retailers had flat or down years. Some fared better than others—Williams-Sonoma, for example, kept its head above water and even grew a little—but overall, meh. But while “pure play” sellers (companies that only sell home goods) faltered, Amazon continued to see growth in its home goods sector. In July and October particularly, it registered double-digit spikes while the competition continued to lag. How’d the e-commerce giant do it?

First, two caveats. One is that Amazon has managed to convince the American shopping public that its big summer sales event—Prime Day—is akin to a national holiday, and the e-comm giant always sees a big July spike (in recent years, home goods have become Amazon’s biggest category on Prime Day). Last year, Amazon doubled down, bringing the event back for an encore in October. So clearly, some of Yipit’s signal is muddied by Prime Day noise.

The other caveat is that Yipit’s research defines “home goods” pretty broadly—gadgets like Roombas, for example, are included in the data. Because Amazon sells such a wide variety of merchandise, it does better in studies like Yipit’s. If the research was purely studying sofa sales, the results would probably look different.

Even so, says Ariane Turley, a senior research analyst at YipitData, Amazon’s numbers are so strong that they’re likely indicative of a broader shopping trend. One big driver, she suggested, is inflation. As the cost of goods continued to rise in 2022, customers started shying away from big-ticket purchases associated with stores like West Elm—instead, they began sniffing around online for bargains, invariably ending up on Amazon and spending their home dollars there instead.

“As inflation has continued to rise, people are more cost-conscious, and Amazon is good at capturing that consumer mindset,” Turley tells Business of Home. “It continued to win on a cost basis.”

The other factor, she suggests, is the rise of third-party sellers on Amazon. There are simply a lot more brands selling more stuff on the platform than ever before—third-party sales have jumped from $13 billion in 2018 to $30 billion in 2021, and the overall trend is continuing upward. As a result, customers who go looking for home goods on Amazon will continue to find more of them, siphoning off sales from pure-play retailers. 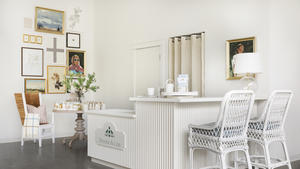