For most lifestyle retailers’ existence, the name over the front door was the same as the one on the products sold inside: Pottery Barn, Crate & Barrel, West Elm and the like. But more recently, many of these single-brand stores have been moving aggressively to bring in products under licensed names, ranging from Goop to Star Wars.

The trend represents a significant departure from a tried-and-true business model. Store-as-brand positioning has been a staple of retailing for just about as long as there has been retailing. The 20th century powerhouses—Sears, JCPenney, Kmart and others—carried national brands alongside their own private labels, but much of their offerings were simply under the store name. Similarly, apparel sellers like Gap, Victoria’s Secret, Uniqlo and Zara have all sold the majority of their products under the name of the store.

So it’s been for the lifestyle home stores as well. Traditionally, Crate & Barrel and Williams-Sonoma may have offered appliances and cookware from outside brands, but their furniture, decorative accessories and home accents were all store-branded. Pottery Barn, West Elm and CB2 rarely carried any products under third-party names.

At least until recently. At the moment, Pottery Barn, a unit of Williams-Sonoma, lists at least eight licensed programs dubbed “collaborations.” They mostly follow a model the fashion industry calls “capsule collections,” meaning they are for limited runs, often a season or two. The newest is a small collection of holiday products from the classic National Lampoon’s Christmas Vacation film, including light-up decorative pillows, sheets and a wadded-up ball of holiday lights in the tradition of Clark Griswold himself. The line joins licensed goods from other media properties like Peanuts and Harry Potter, but also brands from different sectors like Airstream and Sherwin-Williams paint.

Elsewhere across the Williams-Sonoma group, licenses abound. In the brand’s kitchenware division, celebrities like chef Bobby Flay and actor Marlo Thomas have product—not to mention Star Wars and Disney. At West Elm, the names are somewhat more esoteric, ranging from niche designers like Big Blue Moma and Cotton Tree to a whole selection of “brands we love” such as Fishs Eddy and REI.

Over at Crate, the merchandising story is similar. Its newest addition is a limited program from artist Lucia Eames, daughter of midcentury legends Charles and Ray Eames. The tabletop, soft home accessories and decor line features adaptations from her works, with a style described as “whimsical, visually poetic.” She joins a lineup that includes TV home-remodeling celebrity Leanne Ford, home media brand Domino and watch brand Shinola. At sister brand CB2, offerings range from Gwyneth Paltrow’s Goop to midcentury designer Paul McCobb and rock star Lenny Kravitz, with the newest collection based on the works of fabled Italian designer Gianfranco Frattini.

All of these products generally represent looks—and sometimes price points—that wouldn’t be part of these retailers’ traditional assortments. As such, they hope to bring in new customers and demographics, and generate a little media buzz too (Crate’s Lucia Eames collaboration was heralded with a lengthy article in The New York Times).

It’s hard to say exactly what’s driving this licensing boom, but maybe the answer is simple: It works. Based on the sheer number of programs being rolled out, retailers are clearly seeing a positive effect on their top-line revenue. Why not do more of a good thing?

That’s especially true when the potential downside is limited. While introducing a flurry of outside names could potentially muddy a painstakingly crafted aesthetic, retailers tend to keep these collections small. Any given one might not be a huge hit, but the risk of turning off core fans or degrading the overall brand seems small. For most, it’s clearly worth the trade-off.

There are a few holdouts. Lifestyle retailers like RH, Room & Board and EQ3 generally eschew third-party brands, though they sometimes highlight individual product designers. But such brands are the exceptions, and for most, licensing partnerships represent a smart merchandising strategy to keep assortments fresh.

Now if you’ll excuse me, I’m going to light my oven with my Goop-inspired match striker, then cook an omelet with my Chewbacca spatula. 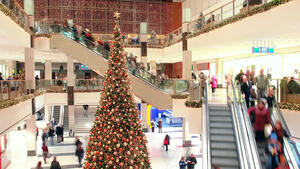