In today’s ever-evolving industry landscape, it’s no small feat for an artisan furniture company to reach its 10-year anniversary. Rhode Island–based O&G Studio, best known for its extensive line of handcrafted Windsor chairs, is celebrating a decade in business this year—an opportune time for Business of Home to speak with co-founder and creative director Jonathan Glatt about what he’s learned and his plans for the next decade. 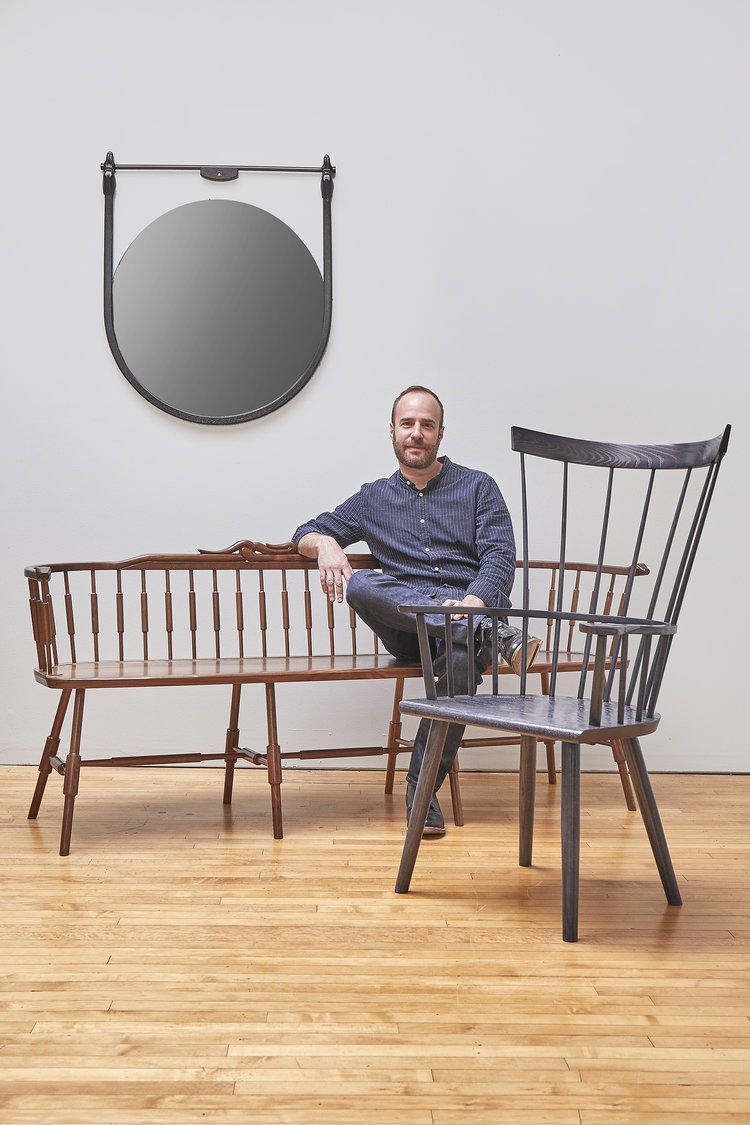 Founded in 2009 by former RISD graduate students Glatt and Sara Ossana, the company has since grown from two to 22 employees, and from a 1,500-square-foot studio to a 22,000-square-foot converted mill—with no signs of slowing down. Having doubled O&G’s revenue in the last five years, Glatt is on the hunt for a new space to accommodate an expanding staff and business. “I’m hoping to grow us by about 75 percent in the next year and a half,” he tells BOH.

In January, Glatt took over as sole proprietor of O&G, and has since introduced several new product lines, some of which depart from the brand’s signature heirloom-style woodworked pieces. The new collections include sand-cast brass sconces, marble-topped accent tables, and bed frames reminiscent of the Windsor chair style O&G is known for.

Before venturing into new waters, Glatt knew it was crucial to master the craftsmanship and detail of what the brand was already making. He explains that new product ideas were long in the back of his mind, but he understood that to make a name for himself, he had to perfect O&G’s existing product. To that end, the studio developed a line of original hardware pieces to hold the furniture together, making the line—Atlantic Hardware—commercially available a year and a half ago.

A big part of Glatt’s expansion strategy will be building his team: Bringing new people on board is a huge investment—and a long one. Each new maker is trained in-house, and it takes about three years to master the art of crafting Windsor chairs. “You’ve got to make mistakes, and every mistake you make is on a real chair,” says Glatt. “On a real piece of wood.”

Getting O&G’s name out and building clientele has also taken time, in part because of the studio’s location in Rhode Island, far from urban design hubs. Field & Supply, the makers fair in upstate New York where O&G showed for the 4th year this past weekend, has played a crucial role in meeting clients and making connections. Social media, particularly Instagram, has also helped. “It’s allowed us to show what we’re working on to a broad audience right as it’s happening,” explains Glatt, who runs the page himself, and enjoys letting followers see the behind-the-scenes process and sharing clients’ work. “The leading edge of what we’re doing is going up on Instagram.”

Out of everything Glatt has learned from the last decade of business, the most essential takeaway is the importance of loving the work. “You really have to fall in love with the whole package. Learning to grow from an individual-based business to working with a team was one of the big lessons and, I think, the most rewarding.”