An architecture, art, and design celebration is coming to Columbus, Indiana, this month. The small city is home to 45,000 people and a happily disproportionate number of buildings, landscapes and public artwork by internationally renowned architects and artists. “Exhibit Columbus,” which will include 18 interactive installations throughout the city, opens August 26 and runs through November. 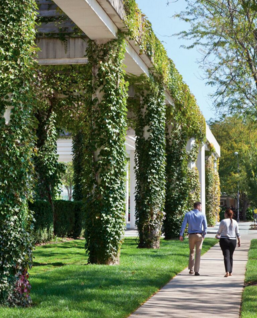 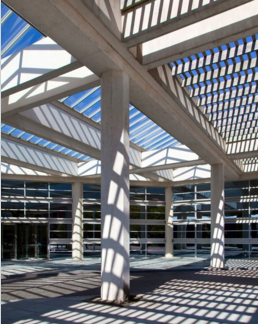 One of the initiative’s installations, ‘Anything can happen in the woods,’ reimagines the pergola of an area building as an urban forest.

“‘Exhibit Columbus’ was created in part to answer the question, ‘What’s next for Columbus?’” says Mayor Jim Leinhoop. “We want this initiative to become a platform to showcase our historic design heritage and community spirit, while pointing to the future so the next generation continues to experience a community of tremendous vibrancy, just as the last generation did.”

“‘Exhibit Columbus’ will encourage visitors to explore the design legacy of Columbus while re-energizing the community around the potential to realize new designs in Columbus,” says Richard McCoy, director of Landmark Columbus. “This innovative program is a model that talks about the importance of place and community, themes that are globally relevant. Everything we are doing is about honoring the past, while pointing toward the future.”

The initiative at large debuted last year and runs through 2018. This year’s programming will include the J. Irwin and Xenia S. Miller Prize installations, which will include work by international designers, students and professors from Midwestern universities, and students from local schools. Ten architects, designers and artists were chosen to compete for five Miller prizes; the winners were given “the opportunity to design and build temporary installations in response to—and in dialogue with—one of five Miller Prize sites, two of which are National Historic Landmarks and each a Columbus icon.”

‘Wiikiaami,’ an installation at First Christian Church, features a contemporary ‘wigwam’ made of copper and rebar.

Among the winning projects: “Wiikiaami” at First Christian Church, by studio:indigenous (principal: Chris Cornelius); “Conversation Plinth” at Cleo Rogers Memorial Library, by IKD (principals: Tomomi Itakura and Yugon Kim); “The Exchange” at Irwin Conference Center, by Oyler Wu Collaborative (principals: Dwayne Oyler and Jenny Wu); “Anything can happen in the woods,” at Cummins Corporate Office Building, by Plan B Architecture and Urbanism; and “Another Circle” at Mill Race Park, by Aranda\Lasch (principals: Benjamin Aranda and Chris Lasch).

Additionally, the initiative will host installations from area high schools and universities, as well as the Washington Street Installations, which were created with five international design galleries along the city’s main street, with galleries and curators from New York, Chicago, London, Amsterdam, Copenhagen, Brussels and more.