This week in design, Elle Decor editor in chief Asad Syrkett divulged his typical Sunday routine in The New York Times, starting with a cup of tea in a cherished Ginori mug and ending with a novel. Stay in the know with our weekly roundup of headlines, launches, events, recommended reading and more.

Business News
The Wing, the all-female co-working space founded by Audrey Gelman and Lauren Kassan in 2016, shut down abruptly last week. As Insider reports, an email sent to members announced that all six of its current locations, which had reopened 14 months ago following a pandemic closure, would be permanently closed, effective immediately. The message cited the pandemic and “increasing global economic challenges” as major factors in the decision, which made the company unable to restore active membership and events to previous levels. On social media, few decried the decision, as The Wing received backlash in 2020 after a New York Times investigation revealed poor treatment of employees of color, prompting Gelman’s departure from the company. However, many expressed an interest in where the club’s trademark millennial-pink decor—the creation of architect Alda Ly and designer Chiara de Rege—would be headed. Though it began with lofty ambitions, as writer Diana Budds put it for Curbed, The Wing’s lasting legacy may be furniture.

Thanks to the recent strength of the U.S. dollar—which has gone up 15 percent over the past year and reached parity with the euro for the first time in two decades—many Americans are taking their homebuying search to Europe. According to The Wall Street Journal, the economic shift is fueling a growing interest from U.S. buyers in markets where prices have remained relatively stable compared to American cities, such as London; Paris; Tuscany and Lake Como in Italy; the Provence region of France; and Lisbon, Portugal. According to the Knight Frank Global Residential Cities Index, prices in greater London and Paris rose less than 5 percent in the first quarter of 2021 and the first quarter of 2022, while cities like Phoenix, Miami and San Diego saw increases of 29 percent or more.

After private equity group CSC Generation publicly announced an unsolicited bid to purchase Dubuque, Iowa–based furniture manufacturer Flexsteel Industries last week, Flexsteel chairman Thomas M. Levine announced that the company was rejecting CSC’s proposal, which priced shares at $20.80—22 percent over the day’s closing share price. “After careful review and consideration of CSC’s unsolicited proposal, our Board determined that the proposal substantially undervalues Flexsteel, is opportunistic, and is not in the best interest of the Company or our shareholders,” wrote Levine in the statement. To date, the CSC Generation playbook had been to purchase brands out of bankruptcy (Sur la Table, Z Gallerie) or from distressed retailers (it acquired One Kings Lane from Bed Bath & Beyond in 2020), then “transform them into high performance ‘digital first’ brands,” according to the company’s mission statement. But the company has been rebuffed before, including an unsuccessful attempt to purchase Pier 1 out of bankruptcy, also in 2020.

In June, BOH reported that home brands like Dims had begun to explore the realm of crowdfunded investment, offering nonaccredited investors a percentage of company ownership and right to future revenue. Now, another brand is joining the mix with a new foray into alternative funding: Organic textile maker Coyuchi has launched its own crowdfunding campaign through online fundraising platform Manhattan Street Capital, allowing everyday investors to access shares through a minimum investment of $450. Coyuchi plans to use the funds to expand marketing efforts, debut new product categories and strengthen its B2B partnerships with wholesalers and online marketplaces. According to Coyuchi’s SEC filing, the campaign builds on the company’s growing momentum, as it achieved 26 percent growth in 2021 over 2020, reporting $33.3 million in net sales, with $1.4 million in income.

Purple Innovation Inc. has announced the acquisition of sleep health and wellness company Intellibed. A statement from Purple CEO Rob DeMartini explains that the partnership will allow both companies to consolidate their Gel Grid mattress technology under one brand, while also allowing Purple to move into the luxury market segment faster with a new line set to debut in early 2023. Meanwhile, all Intellibed employees, including CEO Colin House, will be retained by Purple following the purchase.

After President Biden signed the Inflation Reduction Act earlier this month, the biggest solar panel maker in the U.S.—Tempe, Arizona–based First Solar Inc.—has announced plans to spend $1.2 billion to increase domestic manufacturing capacity by nearly 75 percent, The Wall Street Journal reports. With the new investment, the company will be able to power more than 1.8 million homes with solar energy. According to experts, the move is one of the first in an expected investment surge in clean-energy technologies brought on by the new bill as well as increasing demand for solar-, wind- and battery-powered energy sources needed to meet U.S. climate goals. 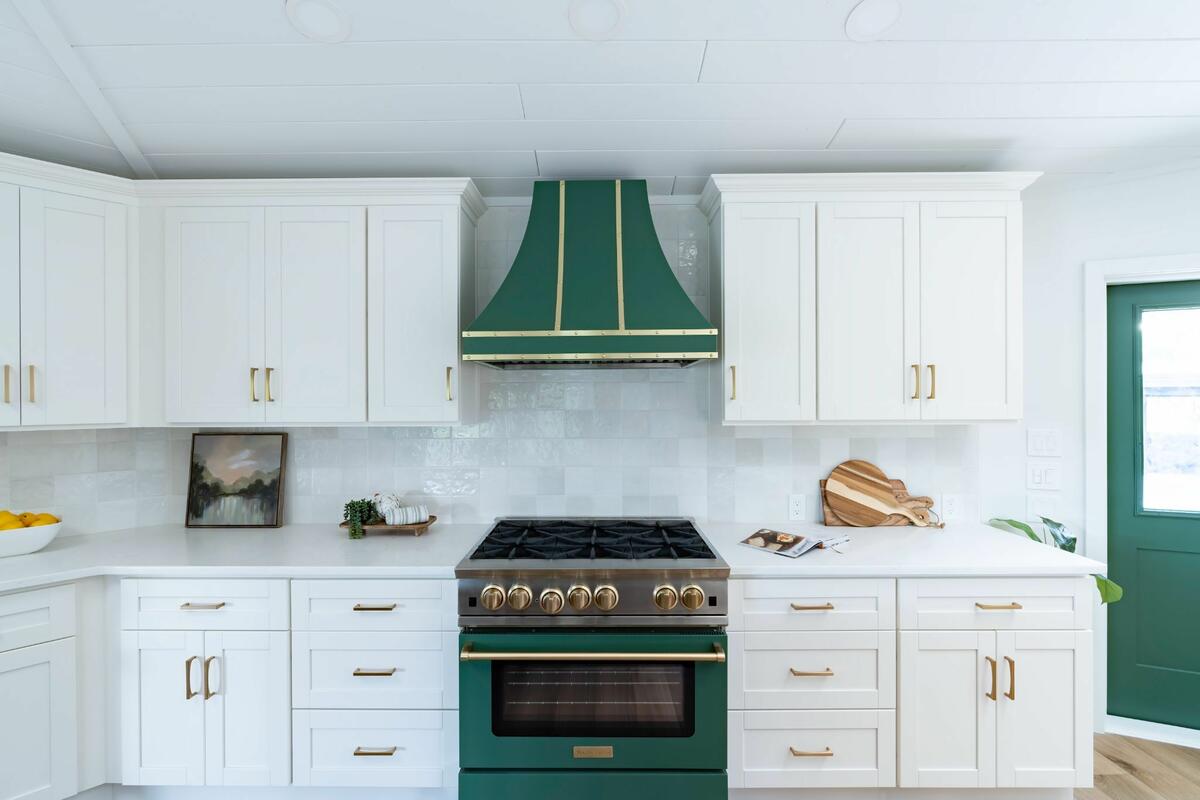 Launches & Collaborations
Chip and Joanna Gaines have partnered with building materials company James Hardie for the debut of a new collection of home siding. The nature-inspired assortment comes in plank, shingle and board-and-batten styles, as well as in a variety of earth-toned shades.

HGTV star Alison Victoria has teamed up with kitchen appliance company BlueStar for a custom color palette inspired by cherished items from the designer’s everyday life. The entirely green-hued collection can be applied to any BlueStar appliance and draws influence from things like Victoria’s own prized emerald ring, her favorite Dior bag and her go-to journal.

First introduced in 1950, the Eames Shell chair has long been a staple in Herman Miller’s product portfolio—now, the piece is getting an eco-friendly update and will be constructed using 100 percent post-industrial recycled plastic. Along with the refreshed material, the chair will be available in a new selection of colors, adding nine new hues to the traditional black, white, red and orange options.

Recommended Reading
Aptly named “cluttercore,” the latest design trend to go viral has seen members of Gen Z cover every inch of their bedroom walls in ephemera ranging from old letters, notes and recipes to shelves of prominently displayed trinkets and childhood relics. As Angelina Chapin writes for The Cut, the more youthful, playful extension of maximalism places a greater importance on sentimental objects chosen to express individuality—a decorative experience one fan of the trend describes as “a museum or gallery of my inner obsessions and memories.”

Though Prada’s co-creative director Raf Simons abandoned his first career path in furniture design to enter the realm of high fashion, he’s since come full circle, returning to furnishings with the debut of a Shaker-inspired storage system for Danish textile company Kvadrat. Simons’s career trajectory follows a familiar path: For The New York Times, Julie Lasky rounds up a recent cohort of interior design debuts with strong ties to the runway.

Cue the Applause
Interior Design has announced the 2022 Hall of Fame inductees, who will be celebrated at an award ceremony in December for the first time in two years due to the pandemic. The honorees include Fuseproject founder and chief designer Yves Béhar, TPG Architecture managing executive and studio creative director Mavis Wiggins and Meyer Davis founders Will Meyer and Gray Davis, along with a special award going to artist and activist Claudy Jongstra.

In Memoriam
Bed Bath & Beyond chief financial officer Gustavo Arnal died at the age of 52 last week after jumping from the 18th floor balcony of his Manhattan high-rise. According to CNN, Arnal’s career in finance included roles at Avon, Walgreens Boots Alliance and Procter & Gamble, before he eventually joined Bed Bath & Beyond in May 2020, where he’s been credited with guiding the company through the pandemic and subsequently building out its team, according to Harriet Edelman, chair of Bed Bath & Beyond’s board of directors. More recently, however, the company hit a rough patch, announcing last week that it would be cutting 150 stores and laying off nearly 20 percent of corporate employees in an attempt to avoid bankruptcy. On top of the company’s uncertain trajectory, Arnal had been named as a defendant in an August 23 class-action lawsuit, which claimed that he and other shareholders had engaged in a “pump and dump” scheme to artificially inflate Bed Bath & Beyond’s stock price. Still, it’s uncertain whether the company’s financial woes were the cause of Arnal’s death, as a law enforcement source told CNN that no suicide note was found. “Gustavo will be remembered by all he worked with for his leadership, talent and stewardship of our Company. I am proud to have been his colleague, and he will be truly missed by all of us at Bed Bath & Beyond and everyone who had the pleasure of knowing him,” Edelman said in a statement.

Former Kohler CEO Herbert Kohler Jr. passed away Saturday at the age of 83. Founded by his grandfather John Michael Kohler in 1873, Kohler began with a primary focus on plumbing products, before expanding into additional kitchen and bathroom fixtures. When Herbert Kohler assumed leadership of the company in 1972, it produced roughly $160 million in annual revenue—by the time he stepped down from the post in 2015, he’d grown the company to a global business with nearly $6 billion in revenue, The Wall Street Journal reports. Aside from scaling up the company, Herbert Kohler’s guidance of the company included a shift away from utilitarian functionality toward design-focused kitchen and bath fixtures—an effort that’s now been passed down to his son David Kohler, who succeeded Herbert as CEO in 2015.

Design business journalist Mark McMenamin passed away late last month at the age of 60, leaving behind a legacy of keen and dedicated observations of the home furnishings world. After earning a journalism degree from Temple University and starting with a job in the furniture section of a department store, Home Accents Today reports, McMenamin soon launched his reporting career at Furniture Today, later becoming an editor for many top industry trade publications, including InFurniture, Interior Design and Metropolis. “Mark was a caring, honest and witty friend, and I’ll miss him so much,” said Cheminne Taylor-Smith, a home industry consultant and strategist, and former editor of InFurniture magazine, in an interview with HAT. “High Point Market just won’t be the same without him.” McMenamin is survived by his husband Wesley Hendrix.

Homepage photo: Chip and Joanna Gaines have teamed up with James Hardie for their debut in the exteriors category | Courtesy of James Hardie