Armani/Casa gets spacious new digs in the Pacific Design Center

Visitors to the Pacific Design Center this week will notice some changes during Fall Market—a few long-term tenants have moved, and Cedars-Sinai Medical Center is taking up more and more square footage. At least one brand is taking advantage of the reshuffle: Armani/Casa, which is relocating to a showroom on the ground floor of the Green Building. At 7,000 square feet, it’s almost double the size of the footprint the luxury furnishings brand had before.

The move has been a year in the making. Last summer, in anticipation of its lease in the building being up, the company began planning its next move. Armani/Casa had been in the same space for nine years—another ground-floor suite opposite its new digs—and although the showroom was 4,000 square feet, it could feel limiting for a company that unveils new furniture, accessories and textiles by Giorgio Armani every year during Milan Design Week.

This particular stretch of ground-level space between the Green and Red Buildings is a coveted promenade. WeWork members (and their guests and visitors) walk through the corridor daily. Tenants like Mimi London and Donghia were offered showrooms on other floors as the PDC started looking to create a destination with diverse high-end collections and more accessories—similar to the outdoor showrooms lining the center’s main entrance.

When Donghia’s old space became available, Armani/Casa recognized the advantage. “We decided to choose this one because of its strategic location,” sales manager Jovani Dunker tells Business of Home. “It’s on the corner, everybody parks in the lot and comes here. And because of this beautiful view to the plaza with the fountain and palm trees.”

Dunker’s emphasis on surroundings is a natural reflex. As a famous luxury brand, the Italian company has boutiques on every high street from its three-level Milan flagship on Via Montenapoleone to an epic renovation presently happening at its Madison Avenue location in New York. The right address matters to fashion brands.

“We are a retail business, and we were born on the streets,” says Dunker. “Of course, the desire to go back to the street is in our blood. … But it’s a new phase for us now. We are here, and we will try to attract more end users to the building.” Dunker admits non-trade walk-ins aren’t as frequent, but the cost per square foot to rent in Los Angeles, he says, can make a “normal” retail presence a stretch, noting that the cost is lower being inside the PDC. 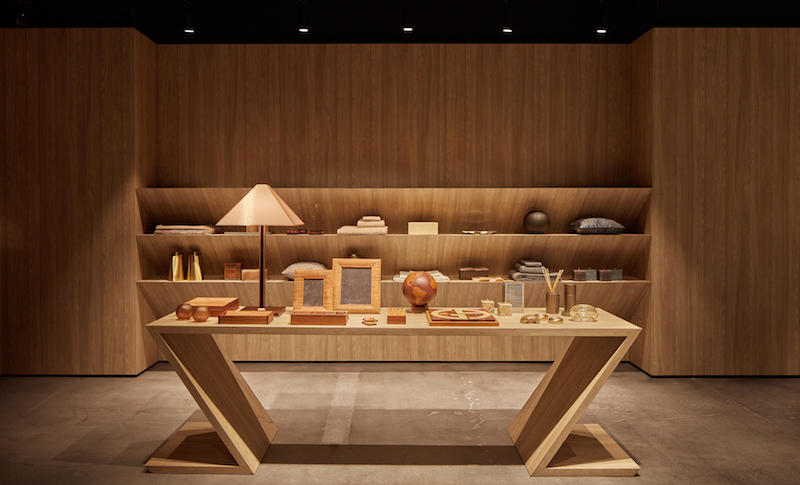 Armani's new showroom in the PDC is 7,000 square feet.Courtesy of Armani/Casa

Armani/Casa is a unique hybrid. The showroom does more than 80 percent of its business to the trade, but has a dedicated non-designer client base, drawn from its fashion heritage. In 2001, the brand had a dedicated showroom on Robertson and Beverly Boulevard, which closed in 2008. Two years later, the showroom opened in the PDC. Dunker highlights the importance of emphasizing the design side of the business, while also drawing on the strength of the fashion brand.

“To me, the number-one thing is to participate in the community. If you're in L.A., you need to be a part of the community and do events at the Greystone Mansion or Palm Springs Modernism Week to expose the brand. [For us that also means] doing events in the showroom in partnership with our high-end clientele from the Giorgio Armani Boutique on Rodeo Drive and Emporio Armani. These are tools that we need to have in order to attract the end user to come in here.”

The new showroom arrives on the eve of Armani/Casa’s 20th anniversary next year. In addition to the aesthetic refresh, the highly detailed, built-out space (preliminary estimates were at $1.2 million) affords the ultimate luxury: atmosphere. The interiors team has created multiple vignettes for day and night, separated by mesh dividers that filter the light; oak floors and clean details echo the Milan flagship. There is also the room to show the goods. At more than 7,000 square feet with nine windows around three sides, the brand’s “new postcard” presents a real, expanded view of the collection.

“Instead of six vignettes, we have 12, 13 vignettes. Before we had one bed on the floor, now we have three, and six dining tables. You would go to into the former showroom, where we had two sofas, now we have six,” says Dunker. “By having a large collection, it makes it easier for the client to experience the life of Armani.”

At the moment, the showroom is surrounded by unfilled tenant space—though A. Rudin is just across the aisle. Asked if it felt disorienting to arrive on a block with so few neighbors, Dunker remains optimistic. “The building is working intensely to bring new companies here, and I think you need to have confidence in your product. You need to have confidence in your new layout, and your new postcard, in your new brand. And we are so excited to have this space.”