It’s well-reported of late that higher interest rates have made home sales numbers pretty dismal, and the market for new builds has tanked too. Neither are particularly good for home furnishings retailers or the companies who work with them like suppliers, designers and product developers. But unlike previous housing market downturns, which were much more about the overall economy, this one is different. Very different.

With employment numbers at record highs, incomes up significantly across the labor market and consumer confidence remaining generally positive despite brewing economic storm clouds, it’s the home remodeling sector that everyone should be paying attention to. That’s where the money is.

New research from independent housing consultants as well as statements from the big home improvement retailers all point to consumers continuing to spend on fixing up their existing homes even if they can’t afford to buy a new one. The best numbers come from Harvard’s Joint Center for Housing Studies, one of the most highly regarded sources for housing information. Its model forecasts that maintenance and improvement spending will grow by 6.5 percent through the third quarter of 2023—which, while down quite a bit from the previous 12 months, still shows growth when the overall housing market is registering declines.

All of this makes sense. People who know they are going to be staying in their current homes until interest rates level off will also decide that they might as well make those homes nicer by remodeling and redecorating. This is particularly true if they have jobs and are earning more money than they did last year—which many Americans are.

There’s also the matter of the status of homeownership in general. Recent studies show that 40 percent of homes in the country are now owned outright, without mortgages, and those who still have mortgages mostly have them at lower rates locked in before the Federal Reserve began to raise rates. Case in point: Executives at Lowe’s and Home Depot have both said their remodeling businesses remain strong, and paint seller Sherwin-Williams has been putting up good earnings the past year even as the housing market slowed down.

For home furnishings retailers that might have aligned their marketing efforts with new home builders or targeted consumers who had just moved in the past, 2023 is pointing to a new strategy—one that focuses on existing homeowners who want to give their spaces a makeover.

In a recent article in The Wall Street Journal, Justin Lahart and Jinjoo Lee wrote that “spending on home improvement appears well insulated for now.” Far be it from me to let them get away with a pun like that without responding: That’s why, while spending on redecorating this year may not quite be through the roof, it looks like it’s going to be safe as houses. 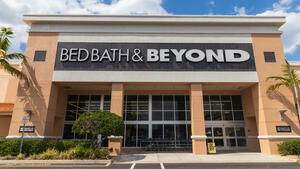