A public artwork inspired by the suburban U.S. flat-pack homes of the 1950s debuted in the new American embassy in London, which opened its doors on January 16. Created by British artist Rachel Whiteread, the sculpture, titled “U.S. Embassy (Flat pack house),” is housed in a controversial location that recently drew the ire of President Donald Trump. 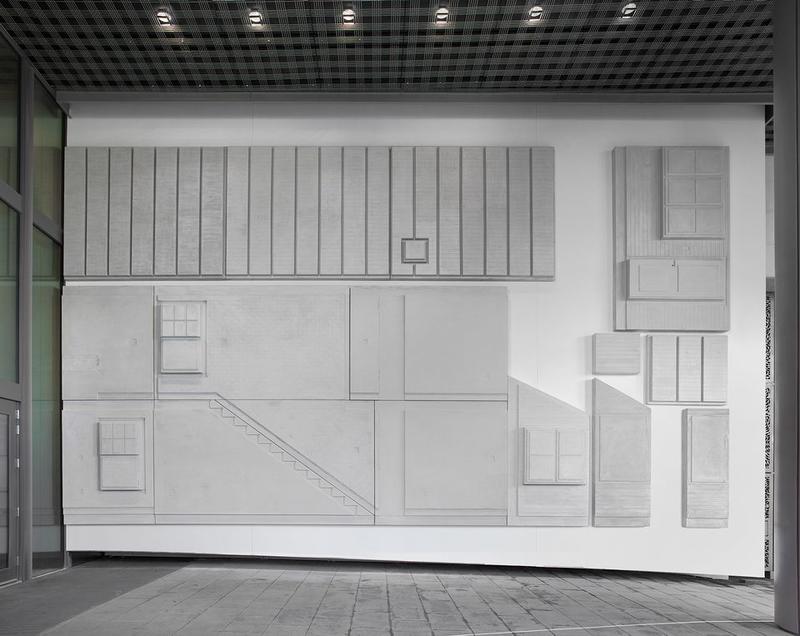 Trump was scheduled to cut the ribbon at the embassy but canceled. On January 11, he tweeted: “Reason I canceled my trip to London is that I am not a big fan of the Obama Administration having sold perhaps the best located and finest embassy in London for ‘peanuts,’ only to build a new one in an off location for 1.2 billion dollars. Bad deal. Wanted me to cut ribbon-NO!”

(In reality, President George W. Bush’s administration decided to build a new embassy in 2006 and chose the current location two years later. USA Today points out that the “billion-dollar price tag is typical of an embassy construction of that size,” and that the project was funded by “the sale of other U.S. property in England—not new taxpayer money.”)

Commissioned by Art in Embassies, a U.S. government entity, the work features gray concrete sections mounted vertically along the inside and outside walls of the embassy. Whiteread worked with the building’s architects, Philadelphia-based Kieran Timberlake, on the project.

“The work uses the motif of the average American house, the type that may have been purchased from a catalog in the 1950s; a familiar house that lines the suburban streets of America and would have appealed to a family of modest means,” Virginia Shore, curator for the London Embassy project, told The Art Newspaper.

Other artwork scheduled to be installed includes Los Angeles–based Mark Bradford’s “The Constitution,” which encompasses over 30 canvases and spotlights the text of the founding document.