While virtual showrooms were an emerging technology (even a novelty) prior to the pandemic, they saw an increase in demand overnight when the design industry skyrocketed just as physical shopping ceased. For Cosmo Kramer, founder of Boston-area virtual showroom and 3D product-rendering company Bitreel, the frenzy built to a fever pitch when the term “metaverse” entered the public lexicon. As the prospect of a new online world gained exposure—and marketing attention—his firm’s phone suddenly started ringing off the hook. Now, he says, the excitement has started to cool.

“There was almost a boiling point when everyone was talking about virtual-this and metaverse-that, and we were trying to keep our heads and not get too excited about all this hype,” says Kramer. “And I would say for sure that hype has come off the boil.”

It was bound to happen eventually. Many of the virtual experiences that captivated homebound consumers during the pandemic have lost their luster in recent months as in-person activity has resumed and shoppers face rising inflation. This new climate raises questions about the future of virtual services—after all, why would design businesses need online spaces when the real world is up and running again?

For companies like Bitreel, however, the loss of hype hasn’t meant the loss of new business. In fact, Kramer believes the industry is better positioned than ever for growth, largely thanks to the trial by fire the pandemic provided for designers, buyers and businesses alike.

“It’s planted a seed that this way of selling is actually possible—and in some cases, it’s even advantageous to do things this way,” says Kramer. “It doesn’t mean to utterly replace the way things have always been done—it’s more like augmenting.”

When Kramer founded Bitreel in 2019, the mission was to make the shopping and selling process for ‘considered goods’ (i.e., products a consumer conducts research on, like furniture and decor) something that could be done remotely in order to save shoppers the time spent shuttling back and forth to stores. Today, that goal has largely stayed the same. Bitreel allows brands to either create a virtual version of an existing physical store or an entirely new virtual space, and the company’s clientele spans a variety of home and design retailers and manufacturers, including retail giant Ethan Allen. Bitreel charges clients a monthly fee per space. For a smaller brand, the outlay could be a few thousand dollars a month; a larger brand with a bigger digital footprint might end up spending up to $5,000 for a fully decked-out store with 3D digital re-creations of the entire product catalog.

Over the past 18 months, Kramer has seen more manufacturers and retailers adding virtual components to their physical spaces rather than opting for a full-on virtual package. One client, for example, recently closed a 30,000-square-foot physical store and warehouse, then opened a 1,200-square-foot showroom complete with a touch screen that allows shoppers to visit its virtual store, where the company’s entire selection is instantly searchable. By cutting down on massive square footage in favor of smaller store concepts with virtual elements, some of Bitreel’s clients have shaved 30 to 40 percent off their operating costs. Others have taken the hybrid in-person and virtual approach even further, installing store-accessible touch screens in mobile vans and providing drive-by services to customers.

For many companies, the use of virtual applications has not only cut costs internally, but also boosted sales. Tampa, Florida–based virtual services company Marxent, which specializes in AR applications like product configurators and virtual room planners, charges monthly fees of between $5,000 to $10,000 for retailer clients including Ashley Furniture Industries, La-Z-Boy, MillerKnoll, Design Within Reach and others. Founder and CEO Beck Besecker says after implementing virtual technology, Marxent’s clients saw product sales soar: The use of 3D room planners have increased average order value by 60 percent, for example, and sectional configurators have increased average order value 120 percent. Beyond boosting revenue among existing clients, the proven effectiveness of technology in making sales has better positioned the company for growth and signing on new clients. 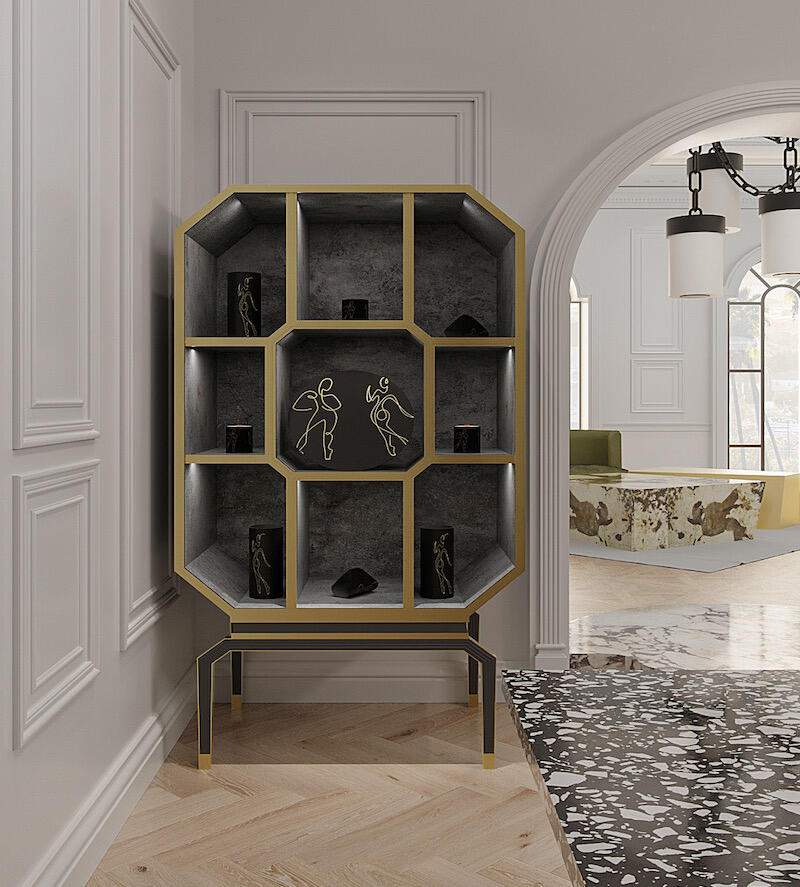 “Back in 2014 and 2015, when people were just starting to get into augmented reality, it seemed like a good idea, but nobody had any real data,” says Besecker. “Now we know that if you have augmented reality on a product page, your customers are two or three times more likely to convert. We have real data around how consumers engage and the quality of leads that they become.”

The boom in VR shopping can also be attributed to 3D technology on standard web browsers, which became available about five years ago. Before then, users needed to download a special program to run 3D applications on their computer and have the hardware to support it. Now, the technology is advanced enough to allow regular consumers to access 3D shopping features online. Besecker compares the phenomenon to purchasing airline tickets—even when it became possible to do so online, it took consumers another few years to actually use the now-ubiquitous purchasing method. To that end, the pandemic simply accelerated an industry shift for virtual services.

Even major players of the brick-and-mortar showroom realm are committing to virtual space strategies. Jack Kashani serves as perhaps the biggest example of that transition: A veteran of trade show and showroom spaces, he founded and ran the World Market Center in Las Vegas for more than a decade. After departing the project in 2011, he’s since stepped into the role of president of virtual showroom provider 1 Click Design, which creates 360-degree virtual walk-throughs of digital showrooms where suppliers and buyers can meet and browse or purchase products. The company’s services start at $10,000, with pricing based on the size of the space, the number and type of products, and the varying requirements demanded of the project. 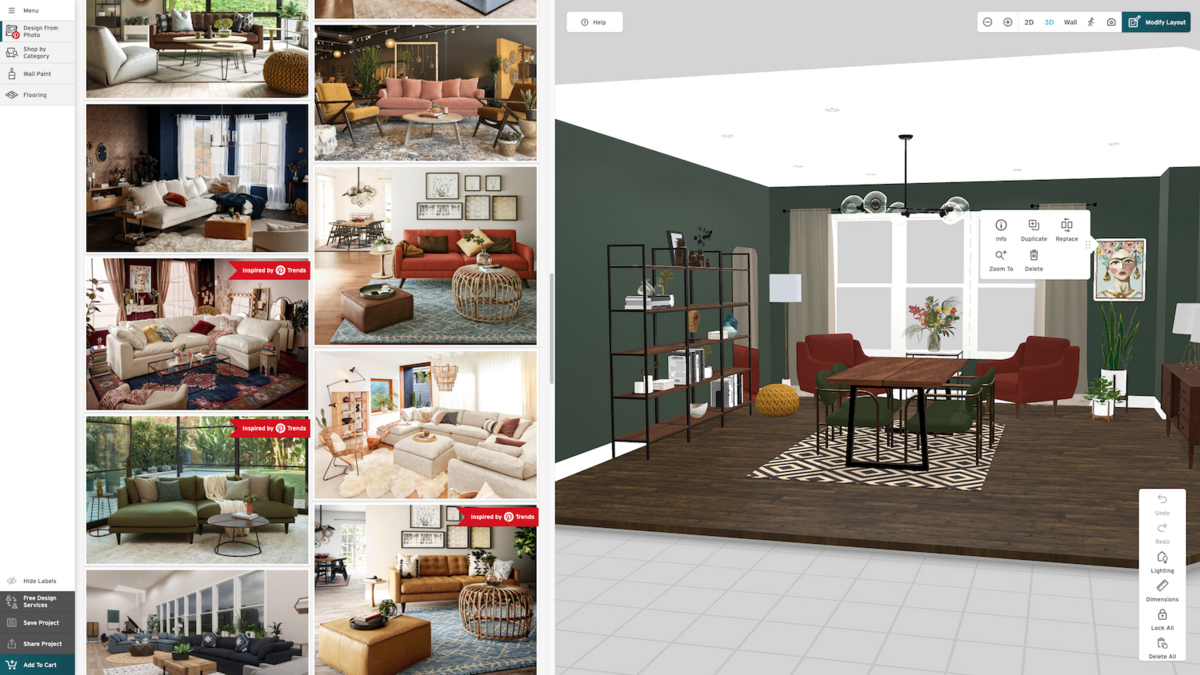 Kashani’s vision for 1 Click Design centers on some of the pain points he observed in the trade show business—namely the fact that, after the necessary real estate costs that come with acquiring and maintaining an in-person showroom, it’s expensive to create an environment that effectively showcases and updates a brand’s product information. Along with pointing out the creative freedom to design a custom showroom—the company’s portfolio features everything from realistic-looking gallery spaces and metropolitan vignettes to fantastical fountain-esque faucet and hardware displays—Kashani touts the ease and accessibility of virtual shopping spaces over site-specific showrooms.

“[With virtual showrooms,] you’re opening the door for a lot of different companies and buyers to look at things the right way—you can always show them pictures, or you can show them things the right way,” says Kashani. He cites the success of a recent project: In a virtual showroom created for Los Angeles interior designer Ryan Saghian, 1 Click Design added an email notification function for when users enter the showroom, interact with products and complete orders. As Kashani tells it, Saghian’s only concern following the launch was that his inbox was so flooded that he had to switch the feature off.

His biggest problem, in other words, was a great problem. “That was his issue,” says Kashani. “They love it—and they want more.” 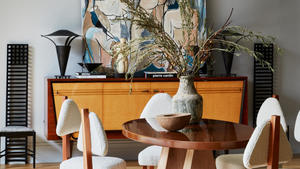