How high can RH shares climb?

On Wednesday, shortly after the market closed for trading, RH reported earnings results for the third quarter. To no one’s surprise, the numbers were strong: Adjusted net revenues for the quarter rose by 6 percent to $676.7 million. Adjusted operating income increased by 44 percent to $87.8 million.

Those are impressive numbers, to be sure, but RH shares had already rallied more than 100 percent since June. The recent news that legendary investor Warren Buffett had taken a more than a 6 percent stake in the company had caused the shares to jump more than 20 points in the past two weeks alone; as the company’s earnings call approached, its stock price looked extended.

When the earnings news first hit, the shares sold off a few points in after-hours trading—a perfectly normal reaction after such a run, suggesting that this recent good news might already be priced into the stock. By Thursday morning, however, sentiment had shifted. Overnight demand for RH shares was far greater than premarket trading had indicated. The stock took off right from the sound of the opening bell, leaping 6 percent higher and never looking back.

What was it that had traders so excited? As I looked through my notes from the earnings call to see what I had missed, shares of RH jumped even further. By 10:30 a.m., they were up 9 percent. Then, as I watched the upward slope on the chart of the rising stock’s price get steeper and steeper, it hit me.

On the RH quarterly earnings call, chairman and CEO Gary Friedman compared the brand’s journey to other luxury retailers: “Every luxury brand in the world today—whether it's Hermès, Louis Vuitton, Chanel, you name it—they were all born at the top of the luxury mountain,” he said. “They started there, and we obviously didn’t. We’re one of the few that is trying to make the climb to the top of the luxury mountain.”

The takeaway? Friedman isn’t the next Steve Jobs or Henry Ford. Instead, he’s a modern-day Sir Edmund Hillary, attempting to be the first climber to successfully scale the luxury mountaintop.

And the trek hasn’t been easy: “The people at the top of the luxury mountain, quite frankly, don’t really want you to make that climb,” said Friedman. “They don’t really invite you to their party. … And to make that climb, you have to do things that create a forced reconsideration. You have to do things that force people to respect you, that force people to tip their hat. And I believe that’s the kind of work we’ve done throughout our entire journey, step by step: We’ve climbed another rung up that luxury mountain.”

Friedman later pointed out that part of the reward of climbing that mountain is luxury profit margins. RH increased its adjusted operating margin in the third quarter to 13 percent, up from below 10 percent just a year earlier. While still a far cry from Hermès margins (more than 30 percent), Friedman believes RH is capable of reaching the 20 percent range as he continues to elevate the quality level of the RH assortment.

Key to Friedman’s pursuit is the upcoming launch of RH international. After teasing European expansion for several quarters, he revealed that the company is finally close to completing real-estate transactions for up to seven initial locations throughout Europe that will open in 2021 or 2022—a move he believes will position RH to become a $20 billion global brand.

The rally in RH shares continued unabated throughout yesterday’s trading session, and by day’s end, the company’s market capitalization had increased by over $500 million and shares closed 13 percent higher on the day. Traders, many of whom stayed negative on the stock for too long, now seem eager to play the role of the brave Nepalese Sherpa Tenzing Norgay as they join Friedman on the steep climb up luxury mountain. 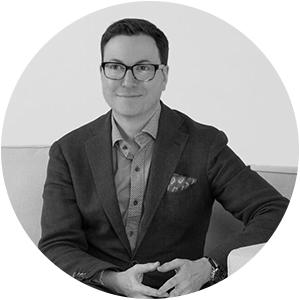 Dennis Scully is the host of the weekly BOH podcast, where he explores the changes and challenges facing the interior design community through interviews with industry thought leaders, entrepreneurs and creatives. Scully was previously a business development consultant for major trade brands, and has held sales and marketing roles at Domino, Waterworks and Twill Textiles. In his Market Watch columns, Scully calls upon his background as an analyst and longtime securities trader as he explores the ins and outs of the home industry’s publicly traded businesses.