on the beat | Feb 7, 2019 |
Recycled plastic made Yardbird go viral, but short lead times are driving its growth

Minneapolis-based direct-to-consumer outdoor furniture brand Yardbird went viral last year for using recycled plastic found in the ocean. Given that in December 2018, Pacific Standard reported that 100 percent of baby sea turtles have plastic in their small, adorable bodies, it’s plausible that with its eco-friendly message, this brand would be popular.

And it is. In the past year, Yardbird, which launched in May 2018, has quintupled its sales, requiring the brand to rapidly scale its eco-friendly model to handle demand. 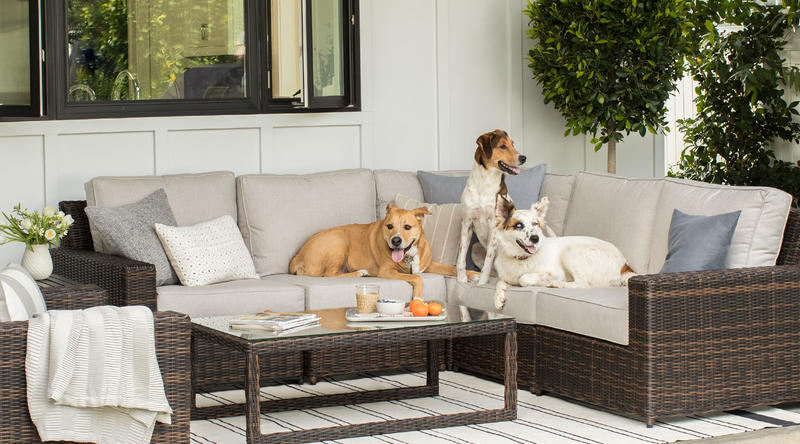 However, its consumers, who are scattered across America with a slight concentration in warmer climates, aren’t nearly as focused on Yardbird’s recycled plastic as they are the products’ quality, price and convenience. (With the exception of California: “If [climate change] impacts you, you care about it,” co-founder Jay Dillon tells Business of Home. “If it’s out of sight, it’s probably not as concerning to you.”)

In light of this insight, Dillon believes he’s found a niche in a market that’s not too crowded yet: direct-to-consumer outdoor furniture. “We feel like we’ve hit on an industry that’s been very neglected and overpriced,” says Dillon. “We’re talking to a lot of people about affordable outdoor furniture that they don’t have to wait half their summer to get … It turns out, people in the U.S. like the outdoors, whether it’s for 10 months or for five.”

Yardbird is not necessarily competing with other DTC furniture brands like Burrow or Article. Its average customer is 46 years old (half are between 40–45 years old, the rest are older) with disposable income and likely a large house in the suburbs.

Statistically, Generation Xers say they care more about the environment now than they did in their younger years. “Perspective is one thing, though; behavior is another,” reported Forbes. “Studies show that merely believing in the importance of protecting the environment doesn’t actually translate into pro-environmental activity—at any age.” Though many surveys indicate that people say they care about going green, few actually are willing to pay more to buy sustainable goods.

Comparatively, millennials don’t diverge too much from this—new studies that emerged in September claim that perhaps their generational preference toward sustainability is because they’re not as wealthy as generations past, reported Intelligencer.

Aiming to diversify, Yardbird plans to roll out product and marketing targeted toward an urban clientele, as its current demographic is mostly suburban. Recently, the brand began to offer free design consultations: Consumers upload photos of their space and receive recommendations for what will fit best.

To accommodate its rapid growth, the brand has maintained relationships with factories in China and Indonesia that Dillon built early on, before Yardbird was a fully-fledged, successful brand, when he and his wife moved to Hong Kong in late 2014 to learn more about the furniture industry. The couple lived abroad for three years, and much of that time was spent in factories across the continent. They returned to Minneapolis last February.

The brand has also donated the price equivalent of their carbon emissions to Carbonfund.org, a nonprofit that helps corporations offset their footprints. “This gives businesses an advantage from a marketing and public relations standpoint with respect to attracting clients and customers that care about the health of our environment,” Linda Kelly, Carbonfund.org business partnership manager, tells BOH. “Most business partners with Carbonfund.org identify areas where they are able to reduce their carbon emissions—and often operational costs as well—by going through the analysis and calculation process. Our motto is, ‘Reduce what you can, offset what you can’t.’”

Though Yardbird still uses plastic and Styrofoam to protect the furniture in shipping (a massive, cross-industry issue, according to Vox), the brand hopes to use 100 percent recyclable packaging by 2020, including plastic film that’s almost entirely made of recycled material.

“It’s easy to scale the sustainability,” says Dillon. “But we think there’s a long road ahead of us.”