That’s a wrap on 2022—now we can take a look back at all the trends that mattered last year, including the unlikely resurgence of … yes, it happened … wall-to-wall carpeting. Stay in the know with our weekly roundup of headlines, launches, events, recommended reading and more.

Business News
Following the homebuying frenzy of 2020 and 2021, fast-rising interest rates in 2022 have caused buyers and sellers alike to retreat from the housing market—now, experts are predicting a year of stagnation in 2023, with economic uncertainty and a rocky stock market forcing home prices, rents and inventory into a state of limbo. According to The New York Times, new data from real estate brokerage Redfin projects 16 percent fewer sales in 2023 compared to 2022—which would be the lowest level since the last housing cycle nadir in 2011. Still, analysts do not expect a repeat of the 2008 crisis: Less than 1 percent of homes are currently in foreclosure, compared to 4 percent at the peak of the 2008 housing crisis, and there are certain markets where home prices are expected to budge, including a potential drop in areas like San Francisco, Phoenix and Las Vegas, while interest rates may begin to fall toward the second half of 2023.

More than a month after United Furniture Industries abruptly shut down, Wells Fargo Bank and two other creditors filed an involuntary Chapter 7 bankruptcy petition against the company, Home News Now reports. In its petition, Wells Fargo claims it is owed more than $99.2 million in secured debt. Additional creditors including the Security Associates of Alabama/Mississippi and V&B International Inc. seek $265,000 in unpaid services and $30,386 in purchase orders, respectively. The creditors aim to take control of—and eventually liquidate—United’s assets. United did not respond to HNN’s request for comment.

The U.S. Consumer Product Safety Commission and Target Corporation recalled roughly 204,000 Pillowfort weighted blankets after two children died from becoming entrapped within the blanket’s removable cover, The New York Times reports. The incidents prompted the retailer to recall the blankets, which were sold at stores nationwide and online from December 2018 through September 2022.

Canadian office furniture manufacturer Inscape sold a majority of its shares to HUK 121, a branch of British private investment firm Hilco Capital, Furniture Today reports. The transaction included the transfer of 12.6 million common shares valued at $88,631, or roughly 88 percent of the company’s outstanding shares. The deal follows a rough patch for Inscape—the company recorded net losses of $14 million over the past year to date, with sales declining 14.3 percent in 2022 compared to 2021. Inscape cited reduced average order sizes and lower order volumes due to the decline in workplace usage across North America due to the pandemic.

Launches & Collaborations
Kohler has launched a new wellness brand called Sprig, centered on the debut of a shower infusion device by the same name that features pods akin to those used in a coffee maker. The single or multi-use pods contain a blend of scents and self-care ingredients like hyaluronic acid and sodium PCA, which are combined with shower water during use. The initial set of six infusion pods includes blends such as Breathe, which contains eucalyptus and mint, and Shield, which features tea tree and rosemary. “Consumer research shows that people are looking for their bathroom space to feel like a spa-style destination,” says Stephanie Krickeberg, associate marketing director of Sprig by Kohler. “Sprig’s goal is to make the most of those small and medium pockets of personal time.”

Toronto-based digital design retail innovation company Digby launched a new product authenticator, offering design companies the ability to protect their intellectual property. Partnering with furniture brand Heller for the program’s debut, the authenticator will launch with a blockchain-based digital token solidifying the authenticity and provenance of each Vignelli Rocker sold. For Heller, the new program will help combat industry counterfeiting, while streamlining the company’s own full circle sustainability program—which allows customers to return a Heller product at any point in its life cycle to be recycled.

Recommended Reading
When Lexington, Kentucky–based interior designer Liz Toombs took on her first project updating a sorority house, she did not expect the niche design space to make up 90 percent of her business just a few years later. As it turned out, Toombs has become part of a growing cottage industry, with similar firms reporting up to 50 percent growth year-over-year in sorority house redesigns and new builds in 2022. For The Wall Street Journal, Kelsey Ogletree explores the growing design specialty, which presents a unique set of interior demands for spaces like high-traffic common areas, sorority-specific house colors and quiet rooms to promote mental wellness.

At some eateries, the cuisine takes a back seat to a well-designed interior. Now, that phenomenon is extending to the bathrooms. Priya Krishna dives into the search for striking restrooms for The New York Times, exploring everything from a disco-themed adobe housed in a Taiwanese restaurant to a bathroom serving as a shrine to Dolly Parton. 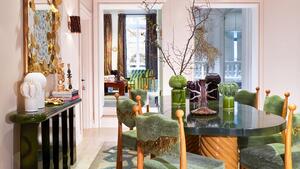