Matriarchy Build is making it easier to hire tradeswomen

Just about everyone can relate to the feeling that the question they’re about to ask regarding a home repair is a stupid one. And let’s face it—if you’re working with someone who has years, even decades, of trade experience, that knowledge gap often comes with a get-it-done attitude that only escalates the intimidation factor. To eliminate such friction, and empower women in particular, Gabriella Ainslie and Lacey Soslow saw an opportunity. In May, they launched Matriarchy Build, an online directory that connects clients with a roster of women-only tradespeople.

Ainslie first became aware of the need for the service about a year and a half ago, in February 2021, when a severe winter storm hit Texas, northern Mexico and parts of Canada, causing roughly $196.5 billion in damages (and, as designers will recall, completely upending foam production in the U.S.). Her own home in Austin was among the ones affected. “Everything froze, everyone’s pipes were breaking, it was crazy,” she tells Business of Home. “It was this moment of reckoning where I was like, ‘Gosh, I don’t even know how to turn off the water to our house.’” 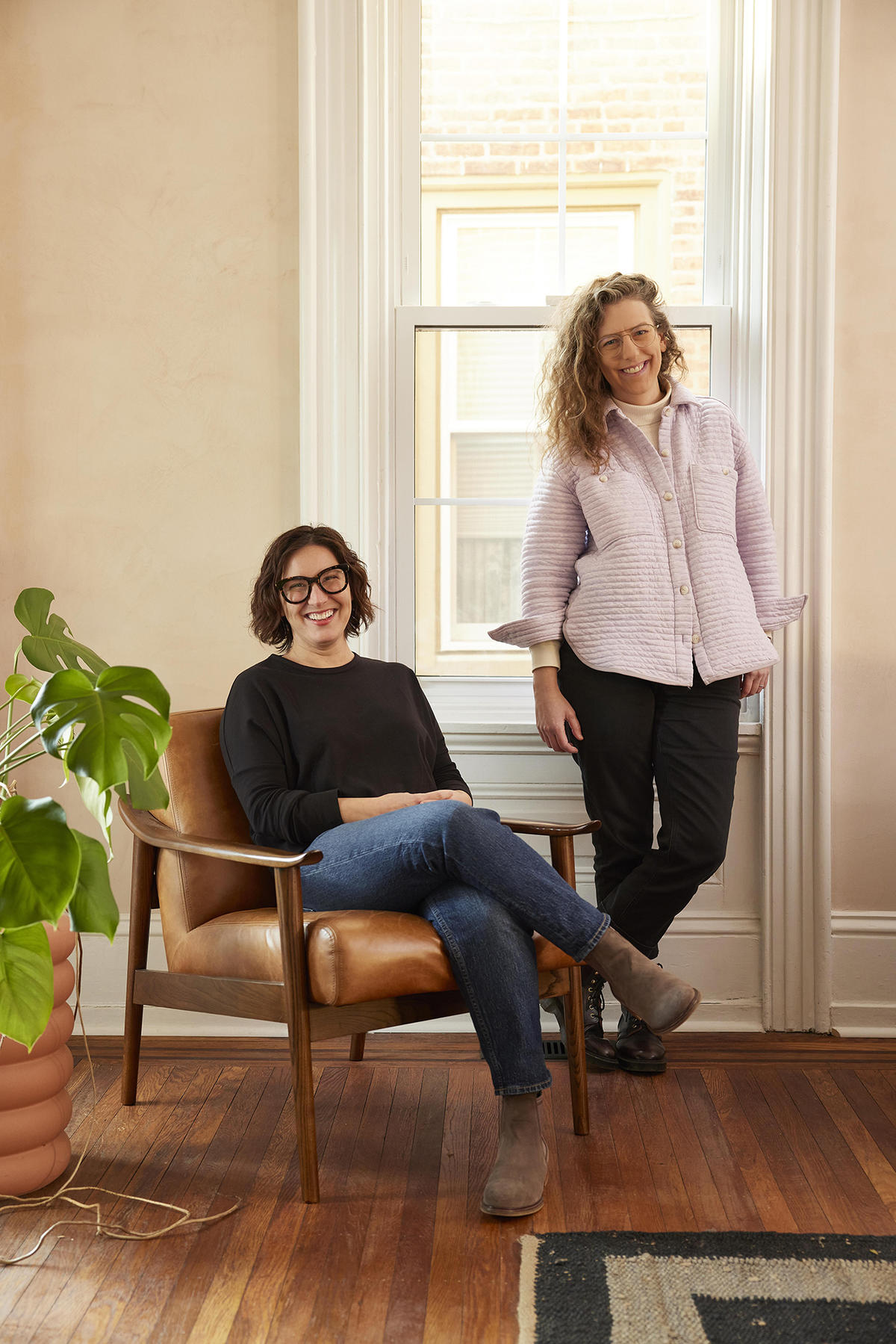 Realizing she was going to have to hire a plumber for the job, and recognizing her limited familiarity with technical jargon, Ainslie found herself thinking of the all-women landscaping company her mother uses in the greater Austin area. “[They were] very proactive, like, ‘You’ve been through this terrible storm, and we’re going to get to your house, but in the meantime, do this stuff to mitigate the damage,’” she says. “I wished that we could find someone with that level of communication to work with.”

Soslow, who has spent the past six years renovating houses throughout Philadelphia with her own mother, received a call from Ainslie, her friend of 20 years, shortly thereafter. “Gabriella called me up and shared her experiences, then asked, ‘Who do you work with? How do you find these people?’” says Soslow. “I told her I don’t really work with a lot of women and I wish I did. I’ve tried, and it’s really hard [to find them].”

The two friends began thinking about the absence of women in the trades, wishing there were an inclusive, empowering resource where hands-on DIYers and total novices alike could go to seek judgment-free advice and information for their home projects, whether they wanted to tackle the job themselves or just feel more confident communicating with a hired tradesperson. A place that offered ample patience, more education and zero mansplaining. Suddenly, a network of tradeswomen—with a name that tipped its hat to their own mothers’ ingenuity—was the obvious solution. It’s not that Ainslie and Soslow set out to exclude male contractors—it was more that they wanted to feel comfortable posing questions and engaging in projects. A community of tradeswomen, they felt, would solidly foster that attitude. So the duo decided to go all-in—Ainslie stepping down from her role as COO at a sustainable fashion company and Soslow leaving her post as head of marketing and e-commerce for home and garden brand Terrain to create Matriarchy Build.

The business model is straightforward—clients looking for advice can filter their search on the platform by trade specialty or project type. Once they’ve found the right “Pro” for the job, they are then directed to schedule either a 25- or 55-minute virtual consultation before filling out a detailed questionnaire. The Pros set their own rates, ranging anywhere from $25 to $65 for the shorter session and hovering around $100 for the longer one. Matriarchy Build takes a 20 percent commission of the contractor’s fee, with the rest of the payment going to the Pro, whose listing on the site is free. And even though they’re not doing the actual work, each Pro is responsible for both walking the client through the steps of a given project and making sure that any undertaking falls safely within their skill level.

To populate their initial list of Pros, the duo did some serious Google searching, Instagram deep dives and, in Soslow’s words, “cold DMing.” They ended up finding communities of tradeswomen all across the country. To vet each candidate, Ainslie and Soslow check licensing credentials and insurance status in addition to work reviews—but there is also an inherent filter to make sure that the Pros’ values align with Matriarchy Build’s mission. “In the process of hand-picking the Pros, we were able to apply our community values: not judging based on experience level, not presenting a client with jargon, trying to empower them, ensuring safety,” says Soslow. “Ultimately, we wanted to make sure that folks were approaching our community with the same spirit and attitude that we were bringing to this, which is a positive, inclusive energy. That may sound a little woo-woo, but it’s a big part of what we’re trying to do.”

In the month or so since the service launched, Ainslie and Soslow have noticed that the consultations have featured a range of requests, from Pros instructing clients through tiling a shower stall to answering questions about fair pricing. “We’ve also had people come on the site, start talking about a project and then say, ‘Ah, this is so amazing to know this is what I can do by myself, but this is what I need to hire people for,’” says Soslow. In a wider sense, Matriarchy Build has created a system that allows tradeswomen to leverage their expertise and generate revenue in new and multiplicitous ways. An added bonus: They can do so from anywhere with a Wi-Fi signal—a perhaps unexpected twist for a traditionally hands-on, and regionally restricted, line of work.

One of Matriarchy Build’s inaugural Pros, Baltimore-based general contractor Beth Pointer, has been pleasantly surprised at how seamless the experience has been from the tradeswoman side of the equation. “I thought it was going to be harder to engage with someone over video about their house, but it turns out they were able to send photos and give a sense of what they were thinking about beforehand,” says Pointer. “It’s been really awesome, and each experience has saved each client a lot of time and money.”

By nature of Matriarchy Build’s inclusive spirit, one foundational tenet of the platform is its diversity—a value that hasn’t always come with the territory. “There is a real skilled trade gap, and there is a sort of dying off of the traditional folks wanting to do trade work, which, to be frank, have almost always been older white guys who come from a family tradition of it,” says Pointer. “This platform showcases [individuals] who don’t look like that traditional group of people. I think there are people who have historically been excluded from this path that will now be inspired to join.”

Matriarchy Build has made it a goal to increase education and interpersonal connection in the contracting business, starting with the one-on-one virtual consultations and supportive network for women tradespeople. But that’s hardly where it ends. “There is a real movement happening, and Matriarchy Build is capturing that moment,” says Pointer. “It’s not just about getting different people in the trades, it’s about creating a completely different experience for the homeowner who’s hiring them. Getting people to expect and demand something better from that relationship with contractors is part of what’s happening here. Clients spend a lot of money doing these projects, and [for them] to not be excited about it—what a waste.”

As Matriarchy Build continues to grow, Ainslie and Soslow hope not just that more clients feel empowered to engage with their own home projects but that the site may inspire more women to consider careers in the trades. “While we’re not expressly getting folks into training programs, we’re hoping that the enthusiasm, exposure and empowerment in this community will get more folks psyched about it,” says Soslow. “Is it mentorship? Is it guidance? That’s not the core business model, but I think the accessibility to these individuals is exciting and something that our Pros are excited about too.”