equity in design | May 18, 2022 |
The industry’s first AAPI organization makes its debut

More than a year ago, interior designers Young Huh and Jessica Davis, owner of Atelier Davis, began a series of phone calls in which they envisioned the creation of a new kind of space within the design industry—one dedicated specifically to students, makers and professionals who identified as Asian-American and Pacific Islander. It was a conversation that started in the wake of the devastating spa shooting that took place in Atlanta in March 2021, when a gunman took the lives of six women of Asian descent in a racially motivated attack. Amid the massive spike in anti-Asian crimes during the pandemic and the resulting Stop Asian Hate campaign, Huh and Davis looked closer to home and realized the design community needed a place for its AAPI members to commune, seek support and lift each other up.

This week, that vision finally came to fruition. The newly debuted Asian American and Pacific Islander Design Alliance held a public launch and panel discussion at the Schumacher showroom in the D&D Building in New York, in an event that served as the founding group’s first opportunity to put out the call to the design community for members and set the wheels in motion for future programming and events.

“Especially in the decorating field, it felt like there were so few of us, I didn’t even know how to reach out to people,” says Huh. “This was a way for us to gather and say, ‘Who’s out there?’”

As the packed launch event demonstrated, a broad swath of design students and professionals felt the same way and had come out to hear from several of AAPIDA’s founding members, including Huh herself, lighting designer Rosie Li, interior designer Jean Liu and Elle Decor and Town & Country contributing editor William Li, in a conversation moderated by Domino contributing editor and Interior Define creative director Benjamin Reynaert and organized with help from fellow member Go Kasai. The group discussed their experiences in the industry as AAPI designers and editors, and outlined the alliance’s mission statement and goals, which are aligned across five pillars: advocacy, awareness, collaboration, dialogue and mentorship.

Part of the importance of creating the organization is to provide AAPI design professionals with a place to simply congregate and discuss issues they face during their day-to-day work—a situation Huh found herself in earlier this year when an encounter in the Holly Hunt showroom left her on the receiving end of microaggressions and general disregard, despite her stature in the industry and as a frequent partner of the D&D building.

“That’s definitely an example of why such organizations exist—so that there is a forum to talk about this, not only on behalf of AAPI design professionals, but also for when we talk to Holly Hunt on their end, as they also feel like they need a place for their employees to talk about sensitivity training, diversity training and support for their colleagues,” says Huh. “It’s an ongoing discussion about everyone having more support and more visibility around the work they do.”

As Reynaert pointed out, the lack of Asian representation in design isn’t reflective of the vast array of talented AAPI designers and makers that exist in the community—and as an editorial voice in the industry, he believes the alliance is the first step in bridging the gap.

“It’s time for a more formal organization to create a support network and space for dialogue within this community as well as be a resource for all in the design industry,” says Reynaert. “My hope is that the formation of the AAPIDA can be the first step toward creating more visibility and recognition within the interior design community.”

To that end, one of the group’s biggest goals is to meet design professionals earlier in their careers and to ensure continued support and success as they advance in the industry. As fellow founding member Joanne Lee, co-founder and CMO of Dowel Furniture, says, starting her business years ago alongside her brother was a lonely experience, as the pair—born and raised in the Philippines—entered the industry without many contacts in the U.S.

“What I hope this group is able to accomplish is for someone starting a business now in our industry to be able to say, ‘Oh, I should reach out to AAPIDA to get some advice and network within the community to help me get started,’” says Lee. “I want them to consider us as a resource for growing and encouraging the AAPI community in design.”

Through programming like mentorships, seminars, workshops and networking events, the alliance’s founding members hope to create new pipelines for early career design professionals to enter the industry with one another’s support. “The diversity of the design industry needs to be showcased so ideas from all parts of the community can be represented,” says William Li. “We can be the group that fosters these conversations.”

The organization’s most immediate priorities include building membership and awareness of the growing group. Already, following the initial launch event, the AAPIDA has received interest from designers in Los Angeles, San Francisco and Texas, where Huh hopes they’ll be able to open new chapters and build the organization’s reach nationwide, ultimately fostering the next generation of AAPI designers.

“Wouldn’t it be great if a design student was like, ‘I’m going to reach out to the AAPIDA to look at job postings, to figure out how to network better, or for some emotional support around feeling very alone in this industry?’” says Huh. “I think that would be really wonderful if this could be a resource in that way, because that’s the kind of support I would have wished for, and we want to be able to provide it.” 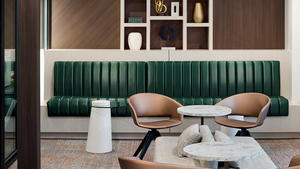 Design for good: How to make making a difference a core part of your business