All across the industry, companies appoint new leaders. Read on for Business of Home’s monthly roundup of arrivals and departures in design, manufacturing, media and more.

To the Trade
Dallas-based outdoor furniture brand Sutherland Furniture welcomed Eugeni Quitllet as creative director. Quitllet worked with French industrial architect and designer Philippe Starck for 10 years, most recently as an associate. In his new role, the Spanish designer and 2016 Maison&Objet Best Designer of the Year will oversee product development.

New York–based multifunctional furnishings company Resource Furniture promoted Gabriella Pomata to marketing director. Beginning her work with the company in 2018 as a marketing and PR assistant, Pomata led initiatives to expand e-commerce, including the launch of a new website. In her new role, Pomata will manage the development of Resource Furniture’s interactive digital tools, strategic partnerships and content.

Connecticut-based planning, architecture and interior design firm JCJ Architecture expanded leadership in its Las Vegas studio. Mike Larson will serve as the principal, bringing more than 19 years of experience in the Las Vegas hospitality and gaming industry. Larson has been with the studio for over four years, playing an integral role in projects like Caesars New Orleans Casino and MGM Beau Rivage Resort & Casino Sportsbook. JoyceLynn Lagula was promoted to associate principal after joining the firm earlier this year, most recently serving as creative director and principal at Campbell House. New hire Derek Sola was welcomed as design principal, bringing more than 25 years of experience from Gensler’s Las Vegas office, where he held the roles of design director, studio director and firmwide gaming leader.

Media & PR
New York–based communications and digital marketing agency UpSpring welcomed Naomi Hoffner as a senior account executive. Hoffner has experience in the architecture and design PR world, most recently at Gensler, where she helped lead external communications efforts for the firm’s North Central region. In her new role, Hoffner will service UpSpring’s clients in the B2B space.

Retail & Manufacturing
Minnesota-based window and door manufacturer Andersen Corporation announced the appointment of Chris Galvin as its new CEO, succeeding Jay Lund, who is retiring after 37 years with the company. Galvin, formerly president and COO, has been with the company for nearly 20 years, holding leadership roles across the corporate finance, manufacturing, logistics, supply chain operations and general management branches. In 2019, he became president of the Andersen division, and he currently serves on the Andersen Corporate Foundation board of directors.

Dallas-based direct-to-consumer home decor brand The Citizenry announced two executive hires: Todd Wandell as its first CPO and Paulo Kos as vice president of design and development for hard goods. Wandell brings 23 years of retail merchandising experience to the role, most recently serving as SVP, general merchandise manager at Pottery Barn Teen, where he oversaw all growth initiatives for retail and e-commerce channels. Paulo Kos has led many multidisciplinary teams to create award-winning collections over the past 20 years, and spent the past eight years as vice president of design to develop furniture, lighting and decorative accessories at brands like West Elm, Ralph Lauren Home and Casper. The two new hires will work to build a whole-home brand for The Citizenry, with plans to debut its first made-to-order bedroom collection early next year.

New York–based secondhand furniture marketplace Kaiyo welcomed Brian Walker to the board of directors and announced David Tarbel as adviser to the CEO. As former CEO of Herman Miller, Walker oversaw the company’s strategic shift to position the company as a premium lifestyle brand. In his new role, Walker will leverage his expertise to help execute Kaiyo’s nationwide expansion. Tarbel will facilitate B2B relationships to increase the company’s scale, while helping its partners reduce their environmental impact. A seasoned omnichannel executive, Tarbel brings finance, operations, real estate and planning experience to his role, previously working at West Elm for nine years, where he served as the senior vice president CFO of the brand.

Austin-based building products brand Kova appointed Bob Posillico as director of business development and sales. Based in Phoenix, Posillico is a construction management professional with expertise in real estate and material supply challenges. Posillico will oversee the sales team and focus on improving Kova’s product line.

Shanghai-based furniture brand Stellar Works appointed Andrew Yang as president of the North American region and Alex Wisnioski as managing director. Yang has been with the company since 2016, previously serving as managing director in the U.S., spearheading business growth over the past six years. In his new role, he will oversee wholesale distribution and bespoke manufacturing for the hospitality industry. Wisnioski joined Stellar Works from New Zealand–based furniture and lighting company Resident, where he was commercial director; before that, he spent more than a decade as managing director for the Americas at London-based studio Tom Dixon. In his new role, he will focus on distribution, operations and retail presence of Stellar Works’s furniture and lighting collections.

The American Society of Interior Designers announced its 2023 National Board of Directors, consisting of 11 members. Toni Gocke Wyre will take over as chair, with John Cialone serving as chair-elect and Carolyn Ames Noble rounding out the leadership team as past-chair. Sarah Colandro and Teresa Humphrey join as two new members of the board. The seven at-large members and industry partner representatives include Denise Rush, Elizabeth Von Lehe, Ken Wilson, Margi Kaminski, David C. Euscher, Lisa M. Tucker and Greg McDonough. The term for the new board will run through September 30, 2023. 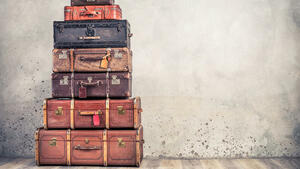 Visual Comfort appoints a president, Arhaus has a new COO and more